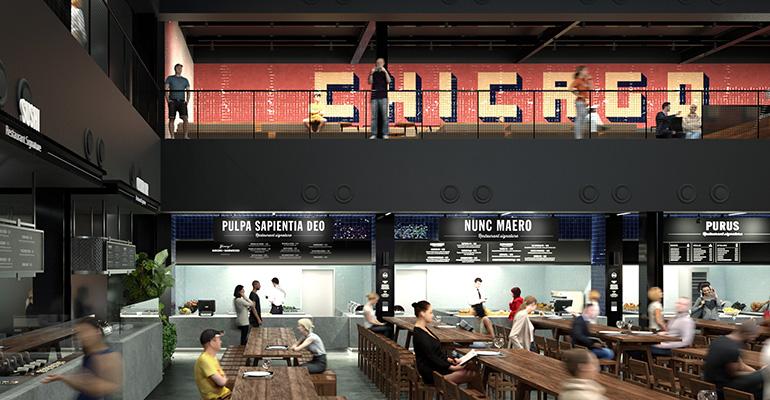 Time Out Market Chicago shapes up for later-2019 opening

A speakeasy tikki bar, a demonstration kitchen and rotating pop-ups are in the works

The fourth U.S. Time Out Market food hall is scheduled to open in Chicago later this year with a star-chef lineup and new features that will include a speakeasy, a demonstration kitchen and rotating pop-up concepts.

Related: Time Out poised to launch food halls across U.S. in 2019

Set to showcase “the best of the city under one roof” curated by editors of Time Out magazine, the space will feature 18 eateries, three bars and a demonstration kitchen as well as a viewing space to look at the city’s skyline.

Previously announced concepts coming to the market include:

Lost Larson, a bakery and café by siblings Bobby and Bree Schaffer that taps their family’s Scandinavian roots. Bobby Schaffer is an alum of pastry programs at Grace in Chicago and Blue Hill at Stone Barns in New York.

Funkenhausen, by chef Mark Steuer, who combines Southern and Bavarian cuisines. This concept will have a three-month residency with dishes like Big Garlicky Pretzels, Cheesy Spätzle and Doner Kebab with an “intimate counter tasting menu.”

This week, Time Out revealed plans for the second floor, including the new Secret Sound, a cocktail concept from Lost Lake co-owners Paul McGee and Shelby Allison. Lost Lake, the tiki-themed bar, was named the best American cocktail bar by Tales of the Cocktail’s Spirited Awards in 2018 and was a finalist for the James Beard Foundation Outstanding Bar Program award that same year.

Hidden on the second floor, this speakeasy will specialize in “bold, rum-soaked tiki drinks.”

Additionally, the second floor will be host to various culinary events at the demonstration kitchen and event kitchen. Here, a rotating schedule of classes taught by up-and-coming chefs and established talent will run. The demo kitchen will offer counter-side seating for chefs and their teams to interact with customers and a semi-private dining room for events. 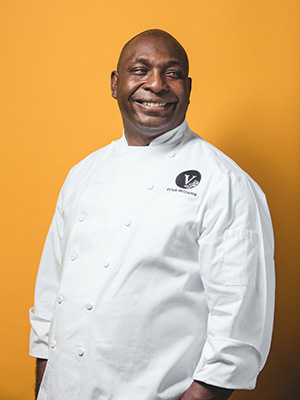 Chef Erick Williams, left, will occupy the space for the first culinary demonstration. Chef and owner of Chicago-based restaurant Virtue, a fine-dining experience with Southern flavors that was awarded a Michelin Bib Gourmand this year, Williams is planning an educational event series aimed at educating the Chicago youth with a behind-the-scenes look at how chefs work, demonstrations, discussions and dinners.

“This will be a wonderful opportunity and space to inform our city’s youth about food and get them excited about it,” Williams said in a statement.

Rounding out the second floor will be bleacher seating to enjoy food from Funkenhausen, watch giant a screen that features rotating art from local artists or participate in the seasonal markets that will occupy the pop-up area nearby.

In addition, chef/restaurateur Bill Kim is planning a casual Asian concept and Thai Dang will serve Vietnamese fare, according to press materials.

There will be charcuterie boards from The Purple Pig; fried chicken from Split-Rail; a burger from Mini Mott; pizza from Art of Pizza and artisan ice cream from Pretty Cool Ice Cream.

The first Time Our Market opened in Lisbon in 2014, becoming a tourist destination. The markets then rolled out to the U.S. earlier this year, opening first in Miami and New York and later Boston. In addition to Chicago, markets are expected to open in Montreal this year and in Dubai in 2020; London in 2021 and Prague in 2022.

An alum of The French Laundry has joined forces with Carl Sobocinski at multiconcept group Table 301
Jul 29, 2021