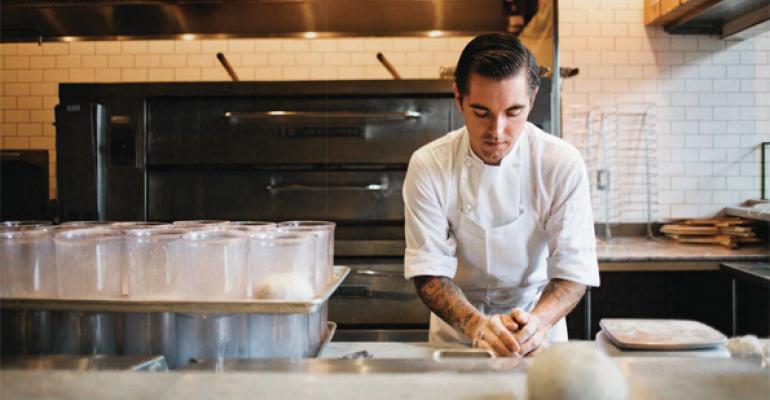 <p> Jeff Mahin drew on lessons learned in the food lab at England&rsquo;s The Fat Duck while developing the perfect pizza dough for Stella Barra. After 30 iterations, he came up with a recipe that produces a crust that manages to be airy, crispy and chewy all at once.</p>
Trends>New Restaurant Concepts

Given his background, you’d think Jeff Mahin would be creating molecular gastronomy-type tasting menus at this point in his career. Instead, he’s operating on a different part of the culinary spectrum, cranking out 700 pizzas a night as chef/partner at the new Stella Barra in Hollywood. The restaurant, which opened in May, showcases both Mahin’s fine hand in the kitchen and the concept development skills of Chicago-based Lettuce Entertain You Enterprises (LEYE), Inc.

On the surface, it appears the 29-year-old Mahin might be underachieving in this role. The first line on his resume: a year as a lab assistant at England’s three-Michelin-star The Fat Duck, then ranked as the best restaurant in the world. Returning to the U.S., Mahin was set to join Grant Achatz at Alinea but hooked up with LEYE instead. There he helped Laurent Gras open the company’s three-Michelin star restaurant, L20, in 2007. Following three years as a corporate chef for LEYE , Mahin headed west to Los Angeles to open LEYE’s Stella Rossa in Santa Monica. That restaurant was an early version of Stella Barra and now shares its name.

Mahin might appear to be a guy who primarily makes pizza dough, then buys cool farmers’ market-type ingredients to put on top of his pies. Don’t be deceived. The commitment to making great pizza goes much deeper than that at Stella Barra.

“There is something very intriguing about taking such a simple food and applying the same philosophy and attention that the top kitchens in the world put to their most intricate dishes,” Mahin says. For example, he went through 30 different pizza dough recipes before hitting on one that produced the effect he was looking for: crusty, airy, chewy and crispy all at once.

This focus shows up in Stella Barra’s compact menu. It has just three categories—starters, salads and pizza—with pizzas available only in a 12-inch size. Mahin says that size was chosen to encourage sharing, with the idea being that two people will split one app, one salad and one pizza. “Very few people eat at a pizza restaurant by themselves,” he notes.

Pizzas—11 varieties in all—are made on a base of handcrafted dough using locally milled flour, filtered water, sea salt and fresh yeast. The promise: a crisp crust, chewy center and unique artisan flavor.

Patrons also can choose to have a Thin Sin, Stella Barra’s Roman-style-extra thin pizza topped with the customer’s choice of ingredients. “It’s almost like a flatbread,” Mahin says. “It works really well as a bar food, too.”

That’s the dinner menu. Lunch offers much the same, with the addition of a few sandwiches to take care of customers who don’t want a pizza. There’s a short-and-sweet brunch menu on weekends, too, and breakfast seekers can start their day by grabbing goodies from a breakfast counter positioned at the door of the restaurant, starting at 8 a.m. That same counter serves as the dessert counter at night; passersby can stop in for a cookie if they want.

Stella Barra, located on Sunset Boulevard in Hollywood, is situated near a number of key traffic generators. Its neighbors include giant independent music store Amoeba Music, the 14-screen ArcLight Hollywood  movie theater and plenty of offices, including the CNN building.

Mahin notes that 25 percent of his pizza business is takeout, much of it consumed by nearby office workers who also frequent Stella Barra at breakfast and lunch. Thus Stella Barra’s revenue stream starts flowing at 8 a.m. and keeps rolling until midnight during the week, 1 a.m. on Friday and 2 a.m. on Saturday night. He says LEYE wasn’t necessarily looking to open a pizzeria in Hollywood, but this location was too good to pass up.

The next Stella Barra location looks like a winner, too. It will be in LEYE’s hometown of Chicago, where the pizzeria will share a large space with a wood-fired grill concept that will feature rustic California cuisine. Chicago is a great pizza town, but don’t bet against Stella Barra succeeding there.