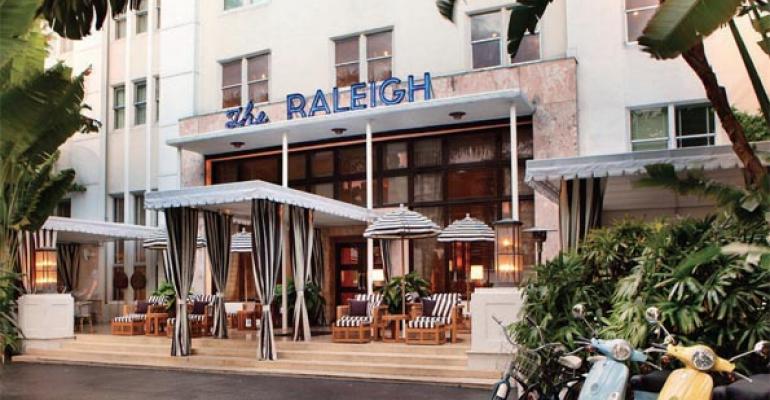 Only a handful of chefs combine culinary expertise and business savvy the way Michael Schwartz does. His Miami-based Genuine Hospitality Group portfolio now numbers six restaurants, two having opened nearly back-to-back during the past few months. More projects are on the way, and the 49-year-old Schwartz is proving to have an especially fertile mind for restaurant development. But people still clamor to get into his operations for one simple reason: to see what he’s doing with the food.

And food is definitely the big attraction at Restaurant Michael Schwartz, which opened in late April inside The Raleigh, a landmark art deco hotel in South Beach. His three other Miami restaurants (farm-to-table flagship Michael’s Genuine Food and Drink; the very casual Harry’s Pizzeria; and the three-month old Cypress Room) are all clustered in the city’s Design District.

But The Raleigh, located six miles away in Miami Beach, represents a return to his roots. Schwartz first made his name as a chef during the mid-1990s at South Beach standout Nemo, earning national recognition for his work there. When luxury hotel brand SBE bought The Raleigh last year, it needed a chef of Schwartz’s caliber to make the hotel’s food as cool as its décor and clientele would be.

“Creating Restaurant Michael Schwartz with SBE and getting to know a property as legendary as The Raleigh has been an incredible experience,” Schwartz says of his latest project. “Together we’ve developed a menu truly fitting of its iconic namesake and locale with a variety of dishes that put local ingredients and flavor first.”

Key words here: “developed a menu.” The food at each of his operations is instantly recognizable as Schwartz-developed. It all fits under the umbrella of fresh, simple and pure food and drink, no matter the concept. Ingredient sourcing is paramount. It’s an approach that has won Schwartz many fans in Miami, perhaps because he goes in a direction that isn’t Floribbean and doesn’t rely too heavily on South Florida’s tropical influences.

There’s one key difference with the new menu. The food he’s famous for at Michael’s Genuine—good enough to earn him the 2010 James Beard Award for Best Chef-South—is popularly priced. Restaurant Michael Schwartz has a higher price point.

As a result the new menu is made up of a few items that come from Michael’s Genuine; a number of dishes from his 2010 cookbook (Michael’s Genuine Food: Down-to-Earth Cooking for People Who Love to Eat) and new to any of his restaurants; and dishes he created specifically for Restaurant Michael Schwartz at The Raleigh. Considering that Schwartz had to go through a similar exercise to compose the menus for Cypress Room, which also has a higher price point than Michael’s Genuine, you have to admire what appears to be his deep well of creativity.

And also his energy. By the time most superchefs are working on their fifth or sixth restaurant concept, they’re aiming at the casual market and embracing the simpler food styles and lower price points that prevail there. Schwartz has lately been going in the other direction, one where the tabs and customer expectations are higher. That’s particularly true at The Raleigh.

Pastry star behind the sweets

Goldsmith handles desserts for all of Schwartz’s restaurants. She and Schwartz have become a powerhouse team; it makes you wonder why other chef/pastry chefs duos don’t pair up over multiple concepts the way these two have done.

As far as drinks go, all we can say about the 38-page Restaurant Michael Schwartz beverage list is that we hope thirsty guests consult the table of contents on page one before trying to make a selection. To simplify, they can pick one of 13 named cocktails or a beer (featured: Schwartz’s Alabama-brewed Michael’s Genuine Home Brew, $15 for a 22-oz. serving). The Raleigh’s legendary Martini Bar is well-served by its alliance with Schwartz and Co.

You’d think Schwartz would dial it back after opening both Restaurant Michael Schwartz and the Cypress Room in a frenzied two-month period this spring. But he’s already working on new projects.

One is a restaurant at a new SBE hotel in Miami’s Design District scheduled to open in 2015 (Jose Andrés will also have a restaurant there).  Also in the works: a second cruise ship venue, this one on Royal Caribbean International’s Allure of the Seas. Schwartz’s first such venture, called 150 Central Park, is a fixture on Royal Caribbean’s Oasis of the Seas. Beyond that, Schwartz inkles he might take a look at Los Angeles, where SBE also has properties.

So does this busy chef risk hitting the wall?

The success of Michael Schwartz Restaurant at The Raleigh indicates he still has energy to spare. However, the ability to deliver for a wide range of partners will likely bring Schwartz plenty of offers for further expansion of his empire. His new place is more proof that he can adapt his style to fit much-different situations. He’s picked partners wisely so far; let’s hope he keeps it up.