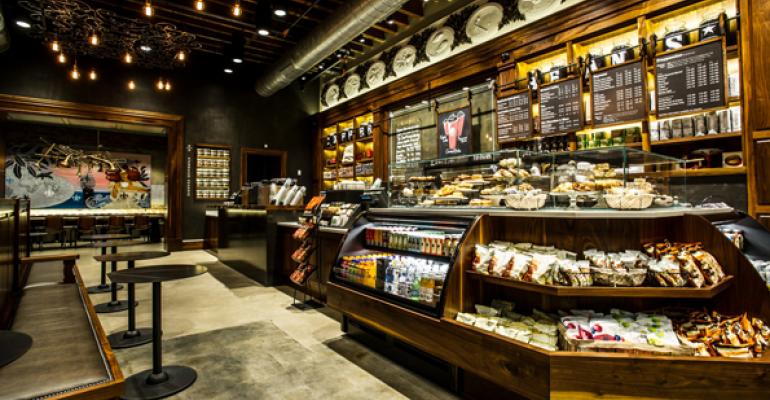 If you're a coffee shop owner who has built a loyal following based on your ties to the community, watch your back. With the opening of a new store in New Orleans’ beloved French Quarter, Starbucks is making a bold statement about its goal to embed the giant brand in the local culture.

The store, at the corner of Canal Street and St. Charles Avenue, was inspired by the city’s quicky character as well as its history as a coffee trading port. Designers based their plan on what the interior might have looked like had it belonged to a merchant in the early 20th century.

In the front room sits a large coffee bar in front of floor-to-ceiling shelves, creating the effect of an apothecary store. A local artist crafted chandeliers form old wrought iron gates, honoring New Orleans’ mercantile roots. Other artists created paintings of coffee beans on small block canvases as well as 12 block paintings above the bar that trace the story of coffee from bean to cup.

While the new store will serve Starbucks' standard lineup, it will also stock a selection of special limited edition Reserve coffees.

The back room was designed to resemble a merchant’s living quarters. Vintage schoolhouse chairs surround a 12-foot community table honed from wind-fallen trees. A large mural by an Atlanta artist references the Starbucks siren and the shipping business. A custom-built chandelier incorporates horn instruments, a nod to the city’s strong jazz tradition.

The effort to stress the brand’s ties to the community is not all superficial. Photographs throughout the new space underscore Starbucks’ commitment to local residents, through $5 million in Starbucks Foundation donations to post-Hurricane Katrina relief and recovery efforts.

Schultz inspires with story of Starbucks' rise, fall and revival
May 23, 2013