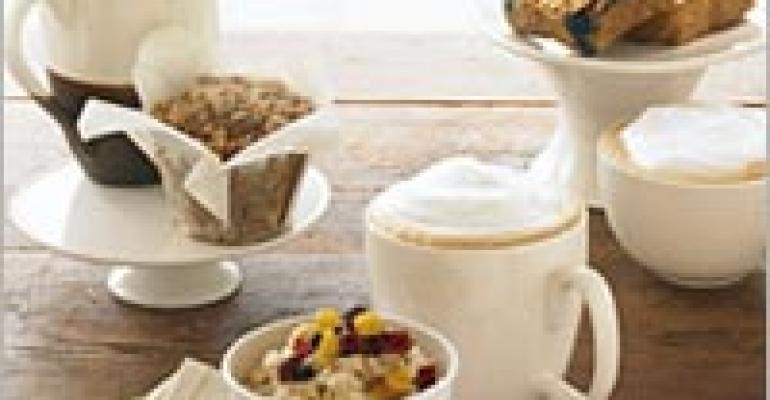 Starbucks, Jamba Juice, Debut New Food Menus. Why Are You Not Scared?

Full-service operators have long conceded much of the coffee market to Starbucks, thankful that the 7,100-store chain (with 4,000 more “licensed” units) never figured out how to sell food effectively. The coffee giant unveiled its latest food gambit on June 29, promising not to fail this time around. Should you fear it—or a similar new push by another standalone beverage concept, 732-store smoothie giant Jamba Juice?

Starbucks and Jamba Juice share a few traits: strong brand, national footprint, a beverage-based business model and a small army of stock analysts who wonder why these publicly traded companies can’t sell more food to the hordes of customers who frequent their stores. This month, these companies revved up an ambitious new food program, even though both labor under the burden of operating stores that have little or no food prep equipment and employ no cooks.

But these chains have other strengths. Both Starbucks and Jamba Juice have the budget, marketing research capability and in-house culinary expertise to figure out what customers want and how best to give it to them. We’re not saying they’ve come up with exactly the right products, nor that they can execute them well at the unit level if they have. But we do think the results of their extensive research and testing send a strong signal about what customers want today.

Which seems to be this: Customers are looking for health and wellness-themed food items, especially when those items are mostly prepared elsewhere and sold in-store in a grab-and-go format. Also, while what’s in the food is important, so is what’s purposefully left out.

How committed are Starbucks and Jamba Juice to these programs? Keep in mind that from a corporate point of view, these programs almost have to work. Otherwise, there are few other options for growth. Who wants to be the c.e.o. who has to stand up at the annual meeting next year and confess that he or she took the company in a bold direction…that didn’t work?

Consider Starbucks. The company has struggled with its food options for years, most notably with the breakfast sandwiches founder Howard Schultz axed from the menu as soon as he retook the reins of the company in early 2008. Since then, the company has had better luck with a short breakfast lineup that includes oatmeal, a protein plate and the 100 percent whole grain Fruit Stella. Starbucks’ go-to assortment of muffins, scones and bagels has remained in effect through all its food experiments. Collectively, these items account for about 17 percent of sales at company owned stores. The biggest-selling item: Oatmeal.

None of this has knocked the socks off of the shareholders and analysts who follow Starbucks stock. They’re expecting more. Even the people who run Starbucks think the food aspect can be much, much better.

“Food has been the Achilles’ heel of the company,” admitted Michelle Gass, the company’s executive vice president of marketing, in an interview with Reuters. “That statement will be long buried after we launch this program,” she added.

That program is dubbed “Real Food, Real Simple” and has several components. New items include the smoothie-like Strawberry Banana Vivanno, a low-cal salad line and, back from banishment, breakfast sandwiches, now made with egg whites. Many existing items in the baked goods line have been reformulated to exclude high-fructose corn syrup, artificial flavor and dyes. New offerings include banana walnut bread, a reduced fat “very berry coffee cake” that’s 20 percent fruit, plus other indulgent-yet-healthful treats.

For all its perceived troubles—Starbucks is in the process of closing a total of 800 U.S. stores—the company is still a money machine. Cash from operations in fiscal year 2009 was a cool $1 billion, and free cash flow was $500 million. Maybe these new food offerings will restore some momentum to Starbucks, whose stock price has declined by half over the last two years.

Smoothie giant Jamba Juice, on the other hand, is not a money machine. Same-store sales fell 13.8 percent in the first quarter of 2009 and chainwide sales were $88.9 million. The company has 732 locations, so per-store quarterly revenue is roughly $121,000. The company didn’t open a single new store during the quarter, either. No wonder it’s looking for a new way to move the needle on revenue.

On the brighter side, Jamba Juice had already begun to offer oatmeal and done OK with that, and its fruit-laden smoothie lineup is a dietitian’s dream. Now it’s doubling down on its healthy lifestyle approach by introducing a full line of wraps, sandwiches, salads and pizza-like flatbreads, which the chain began serving June 15 at 222 of its California locations. Similar to Starbucks, the chain trumpets that the items are made without artificial flavors, artificial preservatives, high fructose corn syrup and trans fat.

One problem: The company’s nutrient-dense smoothies are so filling only the ravenous would be likely to order one along with a meal. Jamba Juice needed a more food-compatible beverage. Enter a new a line of Fruit Tea Infusions, a combination of organic green tea and natural fruit juices served over crushed ice.

We’re not saying this is a bet-the-company move, but it does represent a bold and perhaps risky new direction. Now it’s expecting its customer base to think, “Hey, let’s go to Jamba Juice and not get a smoothie.”

“For many years Jamba Juice has been popularized as the nation’s leading smoothie chain,” says Jamba president/c.e.o. James White. “And although we have introduced baked goods, snacks and most recently oatmeal to the menu, we felt that Jamba Juice was ready for a dramatic transformation. With the addition of food and cold teas, we are able to give our customers what they really want—tasty, high quality foods that are quick and easy.”

Time will tell how well the notion of grafting expanded food programs onto these once-booming beverage-only concepts will work. Keep an eye out for their future quarterly results, which will show how much these new food programs are adding to sales and revenue—or, if not specifically mentioned, how much they aren’t. But whether healthy portability works for Starbucks or Jamba Juice or not, keep this trend in mind as you plan your own restaurant’s to-go options for the future.