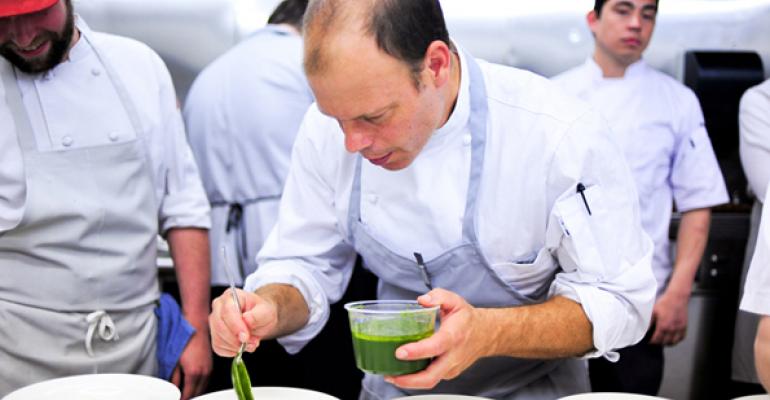 <p>Kevin Nashan has been serving up his New American cuisine at Sidney Street Caf&eacute; for 10 years. </p>
Trends>New Restaurant Concepts

Kevin Nashan has made the city home for 10 years and helped put it on the culinary map. &bull; See more New Restaurant Concepts

Judging by the friends and caliber of cooks who came to Sidney Street Café for the restaurant’s 10-year anniversary bash in January, chef/owner Kevin Nashan is an affable guy with some serious skills. It says a lot when the local competition and well-known chefs from around the country take time from their business to help celebrate someone else’s milestone.

Gerard Craft, Josh Galliano and Kevin Willmann left their St. Louis restaurants for the 10-course dinner, while Sean Brock (Charleston), Kelly English (Memphis), Randy Lewis (San Francisco), the Sheerin brothers (Chicago), John Shields (DC) and others jetted in from all over the country.

There’s no doubt Nashan, a four-time Beard semifinalist, could be working in one of those bigger markets, but he has made St. Louis home. And he’s spent the last decade helping put it on the culinary map.

You grew up in New Mexico, went to school and later worked in New York (CIA Hyde Park and Daniel) and spent time in well-known restaurants in Chicago and Spain. How did you land in St. Louis?

I went to college here—my undergrad was at St. Louis University—and went off to culinary school and then took out the trash in so many restaurants. My wife is from here and I always wanted to come back. I had a great experience at SLU and this town has always felt like home.

You planned to open a new restaurant when you returned to St. Louis, but instead bought an existing one that had been pretty successful for 13 years. How quickly were you able to make it your own?

It was a patience game. Some people think food is pissing in a corner and telling everyone how good you are. It’s not that, it’s making people happy and running a business. It made no sense to change things right away. We already had a restaurant that was well-known for certain things, so it was more like a gardener taking time to grow something. The slow approach panned out.

What was St. Louis’ dining scene like when you took over Sidney Street Café?

There wasn’t a lot of creativity. There were some chefs utilizing farms, but for the most part, everyone just followed what everyone else was doing: a lot of steak restaurants with toasted ravioli.

Was it hard to operate on the higher end and evolve in a city not known for its dining?

It’s been a little bit of a challenge, and maybe more for our customers. You want to evolve, coming from Daniel, but it’s difficult. People enjoy eating a certain way and you have to almost take them on a ride. The one great thing we’ve always had in our pocket was the farms. We don’t have to travel to get product shipped in. That’s one of the beautiful things about the Midwest: We have everything at our fingertips. At the end of the day, it’s all about good food. We wanted to do it in a creative manner, and now a lot more people are doing that here. It’s been an education for our customers and us.

What kind of town is it now?

It’s grown by leaps and bounds. There are probably 20 to 25 really good restaurants, lots of young talent and people moving back here and setting roots. It’s a town that you can take a few days to get through. There’s incredible barbecue at Pappy’s and other great restaurants like Niche, Farmhaus, Mai Lee, Tony’s and more. It has a lot to offer.

It’s changed a lot. It’s sharper. As the years go by, you hone in on your vision and make things simpler. We try to be as elegant without being pretentious. It’s always a work in progress.

Has it lived up to your original vision?

Honestly, I didn’t have a vision of what I wanted. My background was all over the place and I just wanted to cook food that people would enjoy. I didn’t want to cook fancy stuff. I wanted to have that plumber here and the mayor, too. I wanted everyone to experience it. It’s a rustic place with no stuffiness.

Do you ever wish you were in a bigger market?

People ask me that all the time. If I could do it all over, I’d still be in St. Louis. Period. It’s been an incredible ride and we’ve been very fortunate to get to where we are now. It’s been awesome just to see the town grow. It should never be about you or exposure. It’s cooler to be a part of something like a whole movement or a community growing. St. Louis will be a force to be reckoned with in the next five years.

This really seems like a family affair for you.

Family is a huge part of this. My wife (Mina) helps with all the numbers and the business side and my brother (Chris) runs the front of the house and wine program.

Do you ever think about a second restaurant?

I definitely want to and think it’s going to happen sooner than not. I never really thought about it before, but I’ve changed gears lately.