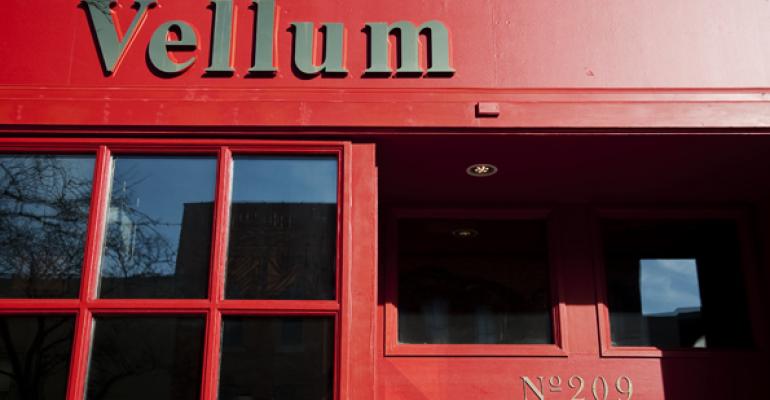 Vellum grows as young owner works to educate his customers and his staff to the contemporary approach he learned while working for Boulud and Batali. GALLERY: A look inside Vellum &bull; See more New Restaurant Concepts

Peter Roumanis knows he’s walking a tight rope. He admits Vellum, his one-year-old restaurant in Ann Arbor, MI, “is all about balance.” He wants the 130-seat restaurant in his hometown to be both a “modern American restaurant of the moment,” but also one that “appeases the Midwestern palate.” Burgers and bone marrow, Budweiser and Bordeaux and Manhattan in the Midwest, Vellum is a study in contrasts.

Roumanis is young, with boyish good looks to match, which makes it easy to think his ambition could be blinded by his youth. That skepticism is partially why he resisted revealing his age for so long, but he now admits, not quite freely, that he’s 25. His resume belies those years.

He started working in his father’s restaurant at age 12, apprenticed in the kitchen at Taillevent in Paris at 16, under the legendary Jean-Claude Vrinat, later worked the line at Daniel in New York City, graduated from Cornell with a degree in hospitality management and was managing Del Posto for Mario Batali at age 21, the youngest manager of a four-star restaurant in New York. Really.

Roumanis has been working toward this for a long time. His father and now financial partner at Vellum, John, owns two other popular Ann Arbor restaurants, Carlyle Grill and Mediterrano, and the family owns an olive oil company in Greece, where they’re from. “I’ve been steeped in this tradition for a long time,” Roumanis says of his upbringing. It’s why he chose to return to the town he grew up in.

Vellum opened in November of 2012 with great expectations and even better early reviews, but there were questions. “Everyone was thinking, ‘This is great, but you can’t do that here,’” Roumanis recalls. “We thought we could, but many thought it was audacious to try.”

Roumanis got his validation in December. The Detroit Free Press honored Vellum as one of its 13 best new restaurants, with critic Sylvia Rector proclaiming: “The intensity and drive of Roumanis and his staff show a passion for food and service that many restaurants lack.” Before that, Eater marked Roumanis as one of its Young Gun Semifinalists and Wine Spectator honored Vellum’s wine list.

While the awards and honors have come, Roumanis admits the restaurant has been a work in progress. He knew it would be. “Of the moment,” as he describes the concept, means Vellum aims to offer the service, technique and preparation he learned while in Paris and working in New York for Boulud and Batali.

Is it fine dining? And if so, does that play in fly-over country? He says it’s not, at least from his “ultra fine-dining” perspective, but he understands it might be to many of his guests.

“It’s definitely a conversation we have every day,” says Roumanis, who spends his days in the kitchen and nights working the dining room. “You can come to the bar and have a burger and glass of wine, or you can come and have a seven-course tasting menu and we’ll treat you in that matter, very private with more discreet service … But this shouldn’t just be a place guests come on special occasions and be adventurous then. We want this to be a neighborhood restaurant and feel comfortable, but also a place where guests know they’ll get little surprises.”

He’s done that by offering the basics, like a cheeseburger ($14) or pork ribs ($24), both excellent, but also by elevating other standards like mac & cheese (with house-made dried gemelli, cheddar, gouda and herbed bread crumbs, $14) and French dip (thinly sliced ribeye, oxtail jus, horseradish, watercress and fries on a French baguette, $16). Rector, the Detroit critic, says “the dish you’ll remember is simply called ‘Bolognese’—handmade tortellini filled with delicate Bolognese sauce, garnished with mushroom duxelle and served in a deeply flavored Parmesan broth.”

The elegant interior and well-thought-out design feel upscale, but there are no tablecloths, let alone white ones, and the servers wear jeans. Everything comes down to balance. When the restaurant opened, bone marrow was on the menu, which led to some “jumping and screaming,” Roumanis admits, and an updated menu soon followed.

“Having that burger on the menu, having the portion size correct, so people get what they expect, is necessary for our day-to-day business,” he says. “But being able to slip in a hamachi with apple puree and have it succeed right next to something they thought they’d like more is the goal. They’ll pick more adventurous things if we get that first part right.”

Heading to Paris at age 16 to cook would be considered adventurous by most, but in the food world, heading home to Michigan from New York City to open a restaurant like this might be considered more adventurous, if not crazy.

But Roumanis believes a restaurant like Vellum can succeed in this college town, home to the esteemed and massive University of Michigan, and Ann Arbor could become the next great food city. In fact, the restaurant is succeeding in part because those transient residents, both students and staff, hail from all over the world and yearn for more than typical Midwestern fare. He says the first reaction he heard after opening was along the lines of: “We didn’t think we’d find something like this here.”

Roumanis has plenty of local support beyond his family. The head bartender, Will Fink, is also from Ann Arbor and a graduate of U. of M., while both the executive chef (Jeffery Sartor) and pastry chef (Mary Potts) are from the state, and all bring extensive experience to their positions. One of his former childhood classmates, Caroline Dunbar, started as the restaurant’s director of service and marketing, but just left for an opportunity in Chicago. Like Roumanis, she brought a resume you wouldn’t expect. Roumanis certainly didn’t.

“When I came back to work on this project, everyone said you’ve got to talk to Caroline, she works in the restaurant business,” he recalls. “I figured she had a job building cupcakes or something. I didn’t have much optimism because of the nature of this town: People leave and go into academia or become lawyers, not into the food business.”

He saw her dad one day and asked, and was told she was working at Noma—in Copenhagen, for René Redzepi.

“I thought maybe we should talk,” says Roumanis, surprised at her experience, and then the fact she was as excited to return home as he was. “Slowly but surely, a real food culture is developing. Not only are people interested in it here, but some are technically able, too.”

Besides bringing his clientele up to the moment, Roumanis also needed to make sure his line-level employees bought into his vision and could execute to the level he expected. Remember, he’d just returned from Del Posto, a four-star restaurant, where he managed a front-of-house staff of 75.

“Plenty of restaurants think they know the way to keep servers happy is by making sure they make a lot of money and the way to keep cooks happy is by making sure they’re cooking what they want,” he says. “There’s a lot wrong with that. There are dishes cooks won’t like, and, especially when you’re building a business one guest at a time, there are nights it can’t only be about money. They all have to take pride and be a part of the process. How do we build and sustain that culture?”

The answer, in part, came from Denmark, and something Dunbar saw at Noma while interning there. After close every Wednesday, the staff gathers and everyone has an opportunity to present or discuss an idea, from a new dish or drink to a service or cooking tip or technique. Wednesday workshops have evolved every other week into a Chopped-style battle. Initially coworkers competed against each other, but now it’s usually one Vellum staffer against someone from another restaurant, mystery ingredients and all, with the judging done by industry insiders and other restaurant operators.

“Many restaurants have informal venues for this kind of process, but this is a formalized stage,” Roumanis says. “It’s necessary for people’s voices to be heard for the improvement of the restaurant.”

The forum has been open to not just the entire staff, but also the public. Initially, a few lingering guests would stick around to watch, but now there are usually 30 or more spectators.

It’s built camaraderie and generated ideas that have improved the restaurant, from a server’s suggestion to bring an unused minifridge upstairs to store water and expedite service, to several dishes presented during the battle making the menu (including a beet salad, a Fall menu favorite). It’s also led to local media coverage and a small, but loyal group of fans and brought the restaurant community closer together with visiting chefs competing and others judging.

If he wasn’t just 25, you might think Roumanis had masterfully planned this all.