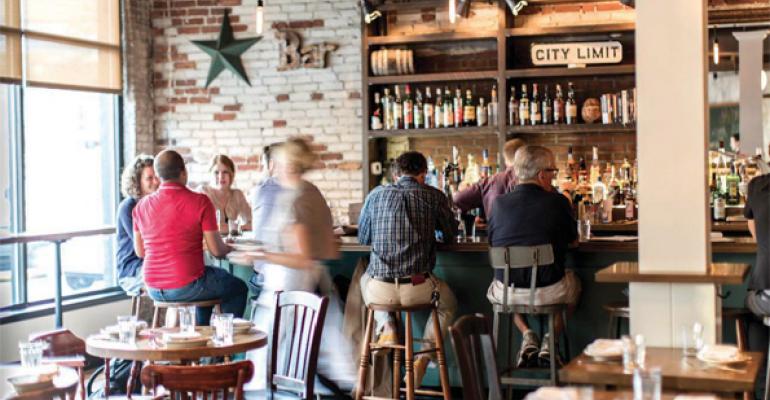 James Beard Award-winning chef Tony Maws, who operates one of Boston’s most respected restaurants—Craigie on Main—is relaxing things up a bit at his newest restaurant, The Kirkland Tap & Trotter. While Craigie is unabashedly upscale, Kirkland is Maws' “inviting and funky interpretation of a neighborhood joint.”

The atmosphere at the new place, he says, embodies an eclectic and cozy neighborhood vibe akin to some of the best gastropubs in England.

“The Kirkland Tap & Trotter is an ever night of the week kind of establishment where guest can feel comfortable enough to eat with their hands and hang out with their friends. It’s very fun and casual, but still focuses on serious food and drink,” says Maws, a 2011 James Beard Award Winner for Best Chef Northeast.

For 37 years, the site was home to the Kirkland Café, a legendary local bar/restaurant. From its early days in the 1970s, the owners were seemingly never content to run a just a plain old bar. They sponsored bike races, held peanut rolling contests and sponsored dart leagues. The old Kirkland closed its doors in 2007, but Maws hopes to capture some of that local energy in his new restaurant, which is open seven nights a week.

His casual, neighborhood attitude for the 115-seat restaurant is evident in the design and décor. Beyond the chiseled stonework entrance, the centerpiece of the space is a large, 12-seat bar painted English racing green. It’s situated adjacent to the wood-burning grill. The exposed wooden beams and original brick walls give the space a rustic charm. If all that doesn’t tell you Maws is letting down his hair, the sounds of Neil Young and Nirvana playing over the sound system does.

To add a homey vibe, Kirkland features vintage and mismatched chairs and silverware, heavy duty glasses and dishes and home kitchen-style tables and vintage banquettes. The rest of the décor is rounded out with reclaimed mirrors and a mermaid sculpture. The overall affect is that of a neighborhood public house.

This casual, funky attitude is carried out on Kirkland’s menu. The cooking style at Kirkland is pretty much how he cooks at home for his friends and family, says Maws, a 2005 Food & Wine Best New Chef.

“You’ll find the same ingredients on the menu at Kirkland Tap & Trotter that you see at Craigie, but here they’ll be prepared simply and perfectly executed. You won’t see any swooshes on the plates here. I wanted to create a place where I could hang, and guests can embrace my jeans and a t-shirt philosophys,” says Maws.

Most menu items are under $20, which suggests to guests that they eat at the restaurant more often. And most items are cooked over a hardwood grill set into a masonry base in the center of the kitchen.

The menu emphasizes family-style dishes for groups to share.

One should keep in mind that when a James Beard Award-wining chef refers to his menu as casual, its seeming simplicity belies how sophisticated his dishes can be. For example, his chicken is crusted with fennel and served with grilled seaweed; the skate wing gets a spicy red curry rub before hitting the grill; pigs trotters are braised and served Lyonnaise style, and veal ribs are also braised, but paired with bacon, red cabbage and an onion gratin.

To mirror the menu, the drink at Kirkland also represents the sorts of libations that Maws and his friends and families enjoy at home. For example, the restaurant features a large beer lists and an expansive wines by the glass list. Maws favors old world wines and wines that are a bit funky, which is perfect for Kirkland’s casual menu.

For the cocktail list, Maws partnered with Patrick Sullivan and Misty Kalkofen, formerly of B-Side Lounge and now the force behind , to create a unique cocktail menu and drinks that are “mixed right, shaken right, served right.”

Despite its more casual attitude than its older sibling, Craigie on Main, Kirkland Tap scored three out of four stars from The Boston Globe during a recent review.

“The place has been positioned as a neighborhood hangout, but that’s just silly; people are going to come from all over, drawn by Maws’s reputation. After a meal or two, though, the Craigie connection becomes irrelevant. The Kirkland Tap & Trotter is no spinoff. It is its own place, great fun, with great food,” wrote Globe reviewer Devra First.

Not only did the Globe get it right, but The Kirkland represents one of America’s biggest restaurant trends—the rise of celebrity chef-driven casual restaurants that blow your socks off. That means Maws also got it right.

Michael White does American retro in all the right ways
Dec 05, 2013