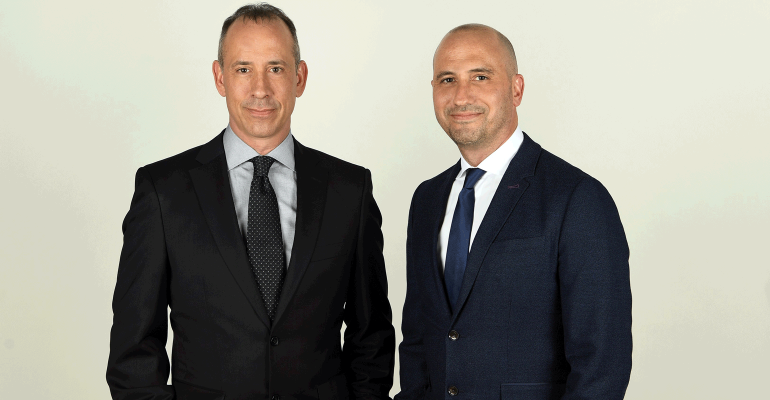 Brothers in beef design a next generation Las Vegas steakhouse

The brothers have been following in their father’s famous footsteps for nearly two decades, each operating his own portfolio of successful restaurant concepts.

But MB Steak —the “MB” stands for “My Brothers” — marks the first time they’ve gone in on a concept together.

“We’ve always fantasized about it … Hoped an opportunity would present itself,” said David Morton, the younger of the two brothers.

For Michael Morton, it was all about the right timing. “We talked about this for years,” said Michael Morton. “I wasn’t ready for this years ago. [I needed] a little more maturity, seasoning.”

Then, when they were finally ready, they had to wait out Michael Morton’s five-year non-compete agreement following the sale of N9NE Group venues, which included the N9NE Steakhouse at the Palms in Las Vegas.

The brothers are confident it was worth the wait.

MB Steak is a full-service restaurant that occupies two levels and 7,800 square feet, including a modern, club-like 100-seat main dining room and a 75-seat bar and lounge with a private bar room on the first floor, and a private dining area with 60 seats and a 75-seat garden lounge on the second floor.

With classic steakhouse elements and fresh takes, the menu, developed by Executive Chef Patrick Munster, is both an ode to steakhouses of days gone by and nod to the future of the category.

“We wanted to be known not just for great steaks, but also for the other stuff,” said Michael Morton. Steaks are accompanied by seafood and shellfish as well as creative chef-driven dishes, such Fennel Crusted Salmon with marble potatoes and lobster butter; Shrimp Risotto with English peas, roasted onion and mascarpone; American caviar sliders made with blinis and chive crème fraiche; and a trio of sashimi shots served with hamachi, tuna and salmon.  Main course selections also include Colorado Lamb Chops, served with toasted barley, escarole and currant lamb jus; and a half chicken with crispy skin and black truffle reduction.

MB Steak offers a curated wine list as well as an extensive selection of premium spirits and craft cocktails. There are other familial ties. The Hard Rock Hotel, where the restaurant is located, was inspired by the original Hard Rock Café concept, which was co-founded and later sold by Peter Morton, David and Michael Morton’s half brother.

Though their new concept is their own, their father’s influence is always with them, said the brothers.

“The things our father put in us, it’s cuisine neutral,” said Michael Morton. “It’s taking care of the customer … treating them specially. In the world of the Internet and Yelp, it’s just one handshake at a time.”

Arnie Morton’s taste for showmanship is there, too.

“He was a great businessman,” said Michael Morton of his late father. “One of our dad’s great lines was he said he was in show business.”

Inside, an LED-lit staircase leads to the second floor’s intimate private dining room featuring burnt lava wood and, 25 feet above, a skylight with operable windows surrounded by a mix of succulents and moss that offers views of the Las Vegas Strip. “[We were] raised around high quality, shown and taught by design and proximity what it takes to make a great restaurant,” said David Morton. “[What] people come to expect from our work is we have really good taste. We’ve been given the gift of good taste.”

While the hey day of steakhouses may seem like a thing of the past and the Great Recession has wrought downsizing and casualizing of much of the industry, MB Steak is a big, bold steakhouse experience. But it’s not all serious.

“There’s always going to be a market for people to go out and celebrate and have the best,” said Michael Morton. “Usually when you go out to eat, you make a choice between fun and good. There’s no reason it can’t be both.”