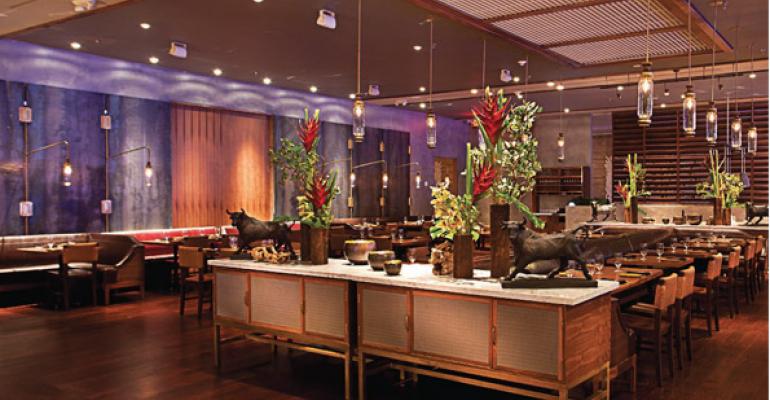 Prolific multiconcept creator Richard Sandoval’s U.S. empire already stretches from Los Angeles to Las Vegas to Aspen to Vail to Denver to New York City and Washington, DC. Internationally, he’s found success in both his native Mexico and in the United Arab Emirates. Now this chef/entrepreneur has tackled the South Florida market, opening the upscale Toro Toro in downtown Miami last fall after first taking at a crack at the fast casual business there with Kokoriko Natural Rotisserie last spring.

That translates to a concept that offers meats carved tableside rodizio-style plus small plates and an a la carte selection of steaks and seafood.

“Toro Toro Miami pays homage to the warmth of Latin American hospitality and the tradition of lively, family-style dining,” says Sandoval of a restaurant he tells HispanicBusiness.com cost $4 million to create. “I think it’s a great concept for a city as unique, vibrant and colorful as Miami.”

Toro Toro should indeed play well for a customer base with a cultural mix like the one Miami has. But it’s already a proven commodity, with the first iteration of the concept doing well at a location inside the Grosvenor House Hotel in Dubai.

Sandoval is a top-flight chef, of course, but he’s always been careful to incorporate a lively bar scene into his restaurants. The Miami location, where the lounge concept is built around Latin spirits, continues that theme. Its liveliness belies its location on the ground floor of the InterContinental Hotel. Toro Toro’s bar is worthy of a man whose La Biblioteca concept in New York City offers 400 different brands of tequila.

Because of this expertise, a new Sandoval concept creates an instant party scene whenever one opens, even in the United Arab Emirates. But his restaurants endure because the food gets equal attention. Patrons at Toro Toro can pick and choose among three styles of dining made accessible by Sandoval’s wide-ranging menu.

No matter what customers choose,  their food has the lively Latin flavors for which Sandoval is well-known. It’s quite a skill to get guests and locals excited about eating in a hotel lobby, but that’s what this concept-savvy chef has done here.

Downtown Miami residents and visitors aren’t the only people excited to eat Sandoval’s food. So are the patrons of Kokoriko Natural Rotisserie, a fast casual chicken chain that has 110 units in its native Colombia and is now making headway in Miami.

Early last year, Kokoriko’s owners partnered with Sandoval to help their chain gain traction in the U.S. His job was to bump up the sauces and flavor profiles of the chain’s food to better fit customer expectations in the U.S.

Two earlier iterations of the concept in the Miami market hadn’t really caught on. The Sandoval version has.

“Chef Sandoval developed a menu that honors our history of 45 years and also adapted modern concepts that make it effective for the American public,’’ says  Kokoriko c.e.o./president Eduardo Robayo. The fast casual operation opened last spring in the nearby Brickell area of Miami.

The always-busy Sandoval’s empire numbers 30 restaurants. He’s owner of many and has menu development deals with others, but the pace of his restaurant development activities is as impressive as their collective quality. Does this chef, who lives in Los Angeles and whose restaurant group is headquartered in New York City, intend to keep going?

“People always ask me, ‘When are you going to stop?’” Sandoval says. “And my response is, ‘I’m an entrepreneur, and until the day that I don’t enjoy it anymore, and cannot produce a great restaurant anymore and I’m opening restaurants just because people want me to do them, and it isn’t in my heart anymore, then I will stop.’"