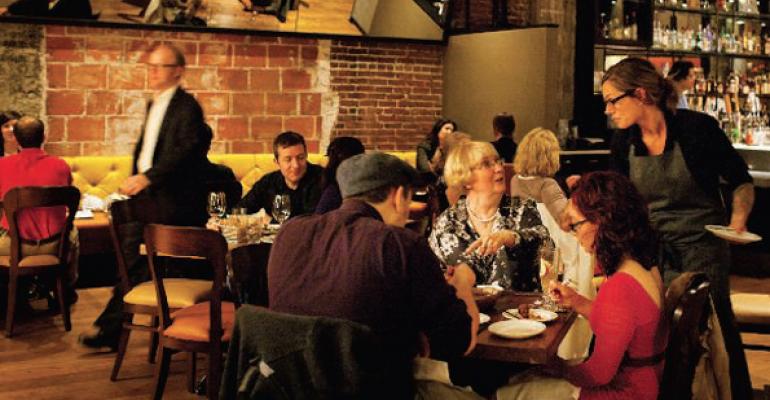 Considered one of the founding fathers of Portland, OR’s dynamic culinary scene, Vitaly Paley rose to national prominence while cooking at his revered Paley’s Place, a pioneering neighborhood spot where this Russian-born chef  has been  going strong since 1995. Now, 17 years later, Paley is putting his Pacific Northwest-centric food philosophy on display in downtown Portland, opening a pair of new restaurants—Imperial and Portland Penny Diner.

Paley may be one of the few Beard Award winners (Best Chef Northwest, 2005) who actually practices what James Beard preached, doing so in Beard’s hometown, too. Paley’s Place is fine-dining French, and its success helped put Portland on the national map back when its food scene was obscure. But his new ones, both located adjacent to the Hotel Lucia, tap directly into the city’s current culinary zeitgeist, a scene so vibrant that Portland has become a major player in shaping contemporary tastes and trends.

In Imperial’s case, it’s a casual dining restaurant that revisits the cuisine of the Pacific Northwest and reimagines much of it for a 21st century audience. “We can’t know who we are if we don’t look at our past,” Paley says. That includes not just paying homage to the region’s local and sustainable bounty, but also to its historic cooking methods. Much of Imperial’s menu is prepared on a giant wood-fired grill and rotisserie meant to evoke the simple cooking methods used in an earlier time. 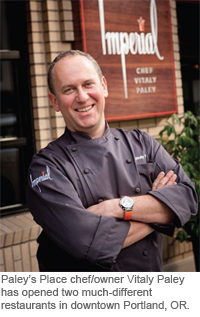 The 10 options on the “From The Wood-Fired Grill & Rotisserie” section include simply prepared items such as Stuffed Sea Bass, Wild King Salmon, Quail, Stan’s Sausage du Jour, an organic half-chicken and a selection of steaks. Equally straightforward are side dish options including Ember Roasted Carrots, Grilled Corn and Sliced Beefsteak Tomatoes served with cottage cheese.

Imperial, which opened in September, is the Hotel Lucia’s in-house restaurant, serving breakfast, lunch and dinner. The kitchen also handles room service and meals for the hotel’s banquet rooms.

As if overseeing 115-seat Imperial and the still-going-strong Paley’s Place (where protégé Patrick McKee is now chef) weren’t enough, Paley opened a third restaurant, Portland Penny Diner, on the other side of the Hotel Lucia, on Nov. 30 last year.

Here’s how he describes its concept.

“Portland is known for our food carts, which evolved from the lunch wagons into the diner. I wanted to bring a new type of diner to our city and Portland Penny Diner will recapture its warmth and comfort while updating and elevating the food and drink,” Paley says. “Portland Penny Diner’s food is inspired in part by what I ate in diners and greasy spoons while I struggled as a young musician in New York City. Take that and combine it with the bounty of the Pacific Northwest with an updated twist and you have Portland Penny Diner.”

It’s a counter service concept that offers Paley’s spin on sandwiches on both the breakfast and the all-day menus. Patrons can eat in the small dining area or just grab and go. 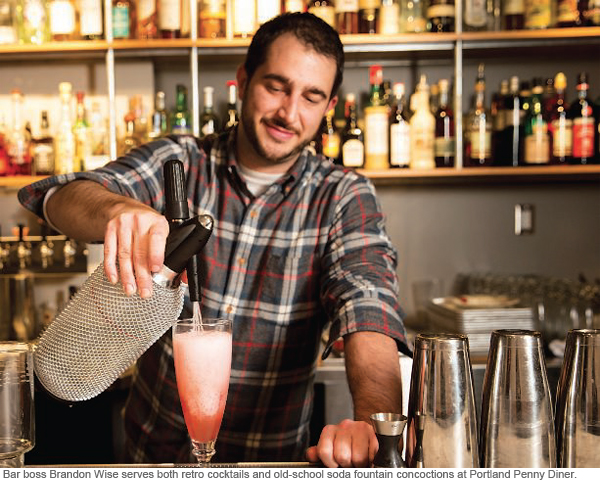 In just a few months, Paley has broadened his portfolio to include both a casual and fast-casual concept to go along with his flagship, the classic-yet-creative Paley’s Place. Each restaurant appeals to a different audience, but all three stay true to Paley’s local, artisanal and sustainable values. Factor in the refined techniques and sensibilities he has developed as a fine dining restaurant chef/operator and the results are three formidable operations. Even the hard-to-please foodie hipsters in Portlandia are impressed by what this guy has done.