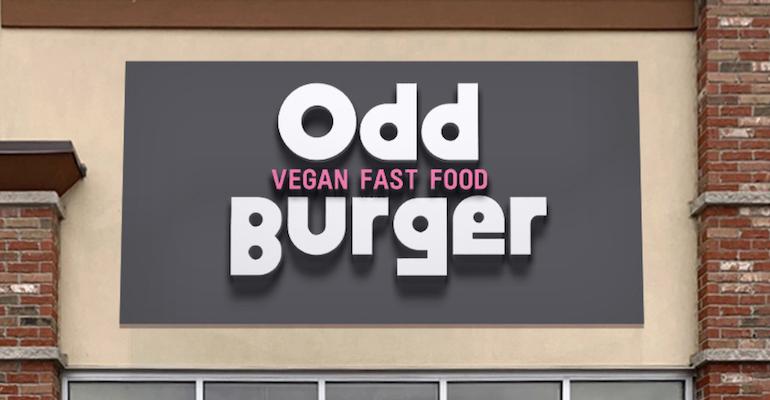 A plant-based quick-service concept newly named Odd Burger has big plans to cross the Canadian border into the U.S. this year to plant its flag.

James McInnes, co-founder and CEO, said 20 locations are planned in the U.S. and Canada over the next year, including five this summer.

Currently the company has two units in Canada still known as Globally Local — in Toronto and Windsor — which are in the process of being converted to the Odd Burger brand. A third new Odd Burger is scheduled to open this week in a Toronto suburb.

Now Odd Burger is looking for its first U.S. location, which McInnes hopes will be in New York City.

Though the plant-based dining landscape is getting increasingly crowded, McInnes said Odd Burger found a particular sweet spot during the pandemic that he believes positions the brand well for success.

Odd Burger units are typically about 1,000-square-feet, he said, with “smart kitchens” designed to produce a high-volume, mostly off-premises menu in a tiny space.

“We use a lot of advanced automation in the restaurants, which allows us to have fewer staff, higher output and more consistency — and better pricing,” said McInnes. “Our pricing is comparable to other fast-food chains, which for a vegan restaurant is unique … because there’s more cost to produce it.”

There is no grill, for example. Much of the menu is produced in a manufacturing plant, or commissary, and distributed to units where meals are cooked in a convection oven to order, with supporting equipment like specialized toasters, fryers that automatically filter and change oil and an Italian gelato machine that produces soft serve. Dine-in guests order and pay with cashless kiosks.

Odd Burger kitchens will also feature other examples of automated robotics that McInnes, who has a tech background, said he couldn’t yet share publicly. The chain is working with a robotics company that is developing proprietary equipment, he said.

One pandemic trend that does not interest Odd Burger, however, is a drive-thru format.

“We had one for a while, but we closed it. It was really hard to get drive-thru locations in Canada. They’re typically expensive and big,” he said.

The three-daypart menu will have about 40 items, despite the small footprint. Odd Burger will serve breakfast sandwiches, burgers, onion rings and fries, milkshakes and non-dairy soft serve made with coconut milk.

The core “Famous Burger,” is modeled after a Big Mac, except it is free of animal products and made with a chickpea patties. Another is called the “Vopper” (“truly fit for a king or queen”) and there’s a “Preposterous Burger” made with seitan and infused with beet juice to appear more “meaty.”

In fact, the concept got its start in Canada with a food truck that was briefly called McVegan before McInnes got a cease-and-desist letter from McDonald’s Corp.

One of the concept’s big selling points is the fact that the food is less processed than much of the vegan meat alternatives available in many restaurants today, McInnes said. The soft-serve ingredients include only coconut milk, vanilla and sugar, for example.

“We focus on simpler ingredient profiles,” he said. “You still feel like you’re getting a treat, but you’re not getting a super high-processed patty with a bunch of ingredients you don’t understand. That’s worked really well for us in Canada.”