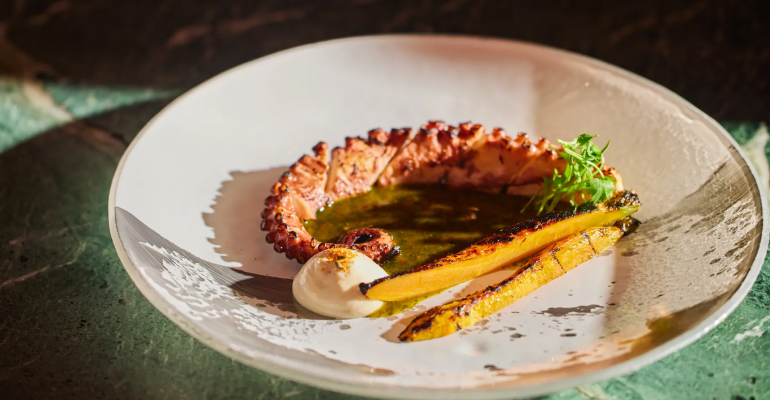 The New York outpost of Katsuya opened at the Citizens Food Hall, a 40,000-square-foot mix of fast-casual, delivery-only and full-service concepts created by SBE and Sam Nazarian, which opened in October. As its latest marquee vendor, Katsuya is at one end of the food hall, and a fine-dining concept from chef Dani Garcia is at the other.

While it may be in a food hall, this location of Katsuya is no quick-service sushi spot. The fine dining restaurant covers 7,000-square feet and seats 305 people, with an additional 100 seats on the rooftop terrace scheduled to open later this spring.

“Being in one of the world’s big cities inspire me the most. Especially being in New York. It’s like a dream come true,” Uechi told Restaurant Hospitality.

Uechi and business partner Nazarian had long wanted to bring Katsuya out to New York since its founding in 2006, but it wasn’t until SBE purchased the food hall space that it became a possibility.

“Our new location at Citizens New York is particularly exciting, as it will mark Katsuya’s first foray into the United States’ Northeast — a moment we’ve been waiting for since our inception 15 years ago,” Uechi said. “As one of the top culinary destinations in the world, we’re excited to finally make our mark in New York City and bring locals the unique experience and bold flavors that we’re known for across the globe.”

Those unique flavors include cuts of yellowtail topped with jalapeno slices, and a spicy tuna tartare laid over grilled sushi rice, and NYC originals like the Manhattan maki roll with spicy shrimp, crab, and tuna.

“I’ve created a menu that translates classic Japanese cuisine to the American palate, offering traditional flavors and techniques with a California spin,” said Uechi. “At the end of the day, my priority is creating fresh, delicious concepts that guests keep coming back for.”

Uechi’s favorite dish on the menu is The Grilled Octopus with Toban Jan sauce, Sesame puree with a glass of Pinot Noir.

“Pairs very well with the dish,” he said.

Katsuya also has four locations in California, plus outposts in Miami, Las Vegas, and the Bahamas. Separately, Uechi’s Katsu-ya Group in Los Angeles also operates the limited-service variations The Izaka-ya by Katsu-ya and Kiwami.