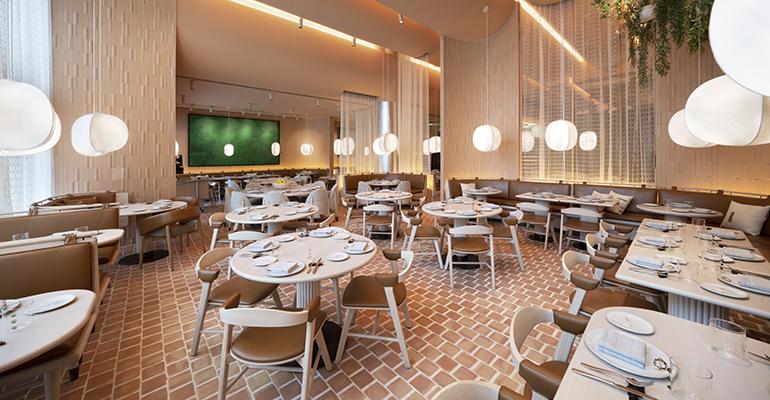 After winning his third Michelin star, the chef still has more he wants to achieve

After chef Dani Garcia received his third Michelin star for the Dani Garcia Group in December of 2018, he felt adrift, unsure what to do next. He had reached the pinnacle of his career at just 44 years old – three is the maximum number of Michelin stars a group can receive ­– and was considered one of the best fine dining chefs in the world. But the Spanish chef had more plans.

The chef and owner of Dani Garcia Group ­– parent to Bibo, Dani Garcia Restaurant, Lobito De Mar, Leña, Smoked Room and Dani Brasserie – decided to flip everything his team had been doing on its head.

“There are only 120 people in the world [with three Michelin stars], we have to feel good, but we are going to change our mentality. We are here at the top of the pyramid of gastronomy and now we are going to invert it and go down,” Garcia told Restaurant Hospitality just before Christmas. “We want to be closer to people.”

In December 2021, Garcia made his grand debut in New York City with the opening of elevated dining restaurant Casa Dani, in partnership with Sam Nazarian and Disruptive Restaurant Group, the restaurant arm of Nazarian’s SBE hospitality company.

Re-entering New York for the first time in years, Garcia decided to create his most personal restaurant yet – Casa Dani literally translates to “Dani’s house.”

Located in the new Citizens food market in Manhattan, Casa Dani focuses on foods Garcia ate growing up such as croquettes, paella, tortillas and rice. He also serves Southern Spanish foods like fresh seafood and tuna, with an entire section on the menu devoted to the fish.

“It's my most personal restaurant, for sure,” he said.

The traditional Spanish food is meant to bring Garcia and New Yorkers back to Spain.

“I think that is incredibly important that our first run in New York is very personal and 100% Spanish. Because you are a Spanish chef, probably New Yorkers want Spanish food from a Spanish chef,” he said.

“As our name suggests, Casa Dani is an invitation to my culinary home and with inspirations from my youth, Garcia said in a release at the time of the opening last month. “We’ve spent the past year perfecting our new menu, which features the best of Spanish tradition and something for everyone! Menu items range from our famed tapas, to a whole section devoted specifically to tuna and for good reason, we have imported some of the best Tuna in the world from Spain. Additional items highlight Spanish favorites including croquetas de jamon and branzino baked in black salt. At Casa Dani we are working to bring as much as we can from Span and from my home to yours.”

It’s that tradition that served as one of the inspirations for the menu at Casa Dani, where the seafood is sourced directly from Spain.

Though much of the fish comes from across the ocean, many other ingredients are locally sourced from New York City depending on what’s in season.

“I am thrilled to work alongside innovative chef Dani Garcia, one of the world’s leading chefs to create an experience like no other at Casa Dani,” Nazarian said in a release. “With Disruptive Restaurant Group, we’ve prided ourselves with being on the cutting edge of culinary cuisine and technique. We’re excited to take this concept one step further and by highlighting the global experience created by Chef Dani Garcia and his team.”

This upscale dining restaurant isn’t all Garcia has opened in Citizens. He’s also opened his first quick-service location in the history of the Dani Garcia Group: El Pollo Verde.

But that’s not his first foray into QSR. Garcia has been working with McDonald’s in Spain for the past seven years, creating new menu additions for the Spanish version of the brand.

“For me the most important is the balance about quality and price,” he said.