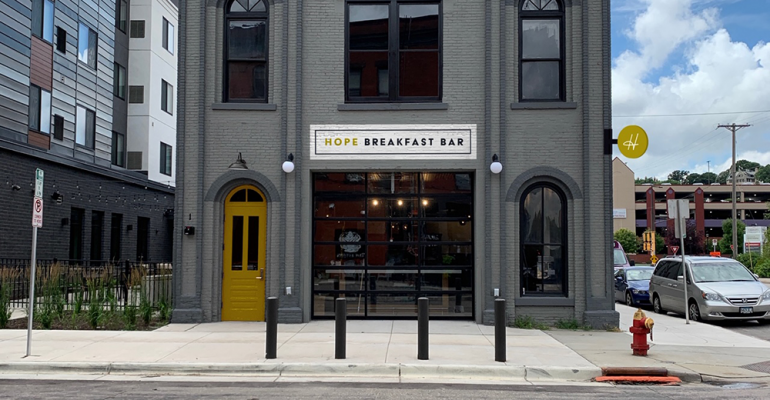 Veteran restaurateur Brian Ingram is launching a unique breakfast concept in a 150-year-old fire station in his St. Paul, Minn., neighborhood, carving out a new chapter in his career.

Ingram, who is known for developing restaurant concepts like New Bohemia Wurst + BierHaus, Cargo Food Authority and Bus Stop in the twin cities, has left his position of chief development officer for Williston Holding Co. to devote himself to the new Hope Breakfast Bar, which is scheduled to debut in mid-September.

The concept is being developed under Bing Concepts LLC, which Ingram said has been a business home to his various side projects over the years. “My wife and I really wanted to do more that was really personal to us and that meant something to our family,” he said.

When they learned that a 150-year-old fire station named Hope Engine Company No. 3 was going to be demolished in his neighborhood, he stepped in for a rescue.

“It’s right across the street from a children’s hospital,” he said. “The hotel it’s next to will have lots of families battling crisis, and for us to be able to provide hope — that really resonated for us.”

Ingram, who is also a member of the MUFSO advisory board, hopes the breakfast-all-day concept with a full bar will also offer respite to hospital staffers working all hours.

The 5,000-square-foot, two-story restaurant will be open from 6 a.m. to 1 a.m. and the menu will feature both savory and sweet approaches to breakfast fare, from popcorn fried in bacon butter with more bacon, to “biscuit donuts” and a stack of giant Carrot Cake Pancakes piled high on a cake stand with cream cheese syrup and candied walnuts.

Here’s a look at the upcoming Hope Breakfast Bar.