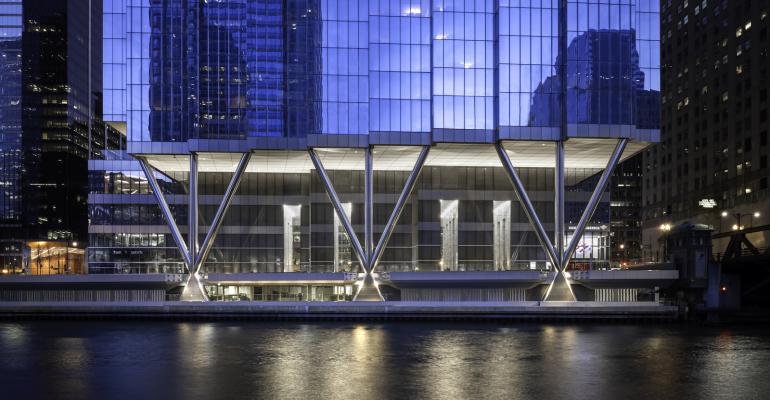 Nick Ulivieri Photography
A look at the entrance to the ThinkFoodGroup dining destination in Chicago.
Trends>New Restaurant Concepts

ThinkFoodGroup will oversee food and beverage at the Ritz-Carlton Hotel in New York, while they’re partnering with Gibsons Restaurant Group for two concepts in Chicago

Chef José Andrés’ Washington, D.C.-based restaurant group ThinkFoodGroup revealed more details about their previously-hinted-at expansions in Chicago and New York City, including a partnership with the Gibsons Restaurant Group in Chicago. ThinkFoodGroup will also be overseeing all food and beverage operations at the under-construction Ritz-Carlton Hotel NoMad in New York City, which is owned by Flag Luxury Group LLC and will be managed by Marriott International.

These plans have been in motion long before the pandemic, ThinkFoodGroup cofounder Rob Wilder told Nation’s Restaurant News, and are part of a long-term strategy to “add critical mass in key gateway cities,” including Los Angeles, South Florida and Las Vegas, in addition to New York and Chicago.

Related: José Andrés’ ThinkFoodGroup and Central Michel Richard are the latest restaurants to sue their insurance company over COVID-19 coverage

“We spent a lot of time studying cities, where we have either an existing foothold with restaurants and are looking to expand within those cities,” ThinkFoodGroup president president Sam Bakhshandehpour told Nation’s Restaurant News. “We love New York and know how important Mercado Little Spain is to the community so [the expansion] was a natural fit. […] Four words: Great cities, great partners.”

Mercado Little Spain — a Spanish food hall that critics likened to an Eataly-type market/food hall that opened in winter 2019 — was the first concept Andrés brought to New York City. With this upcoming expansion, Andrés will be opening up a new outpost of the modernist restaurant Bazaar and Zaytinya at the Ritz-Carlton New York, NoMad. Bazaar already has locations in South Beach, Fla. and Las Vegas and Mediterranean and is slated to open Winter 2022, and small plates’ restaurant Zaytinya, which has a flagship is in Washington, D.C., is opening in New York this fall.

“The Ritz-Carlton wants to be a global brand for service and reach and that matched nicely with our mission at ThinkFoodGroup: change the world through power of food,” Wilder said.

ThinkFoodGroup will also operate a rooftop bar and lounge and will also be responsible for the food and beverage for the hotel’s lobby lounge and in-room dining.

We previously reported on Andrés’ plans for opening a Chicago dining destination with multiple concepts in partnership with Gibsons Restaurant Group inside an $800 million, 55-story skyscraper in 2021. But now we have more details on the enormous project: the concepts will include Bazaar Meat, a Chicago-centric spinoff of Bazaar; a modern cocktail and oyster bar Bar Mar; and an all-day café concept along the Chicago River, Joe by the River (a play on the slang for coffee and the English word for José), which will be situated as a “hidden gem,” almost like a speakeasy for coffee lovers.

ThinkFoodGroup will also provide catering inside 110 North Wacker Drive, the city’s tallest office building, and the concepts will begin opening this summer, with an early fall date slated for Bazaar Meat.

Although most of these plans were already in motion by the time the pandemic came around, ThinkFoodGroup believes that their expansion — and the opening of other neighborhood restaurants — could be a vital element in bringing places communites back to life that lost a lot of businesses during the COVID-19 pandemic.

“We’re very bullish on our business and our great cities coming back,” Wilder said. “We’re seeing it in our restaurants today, even in neighborhoods like area of Washington, D.C. that were shut down. People are eager to come out.”