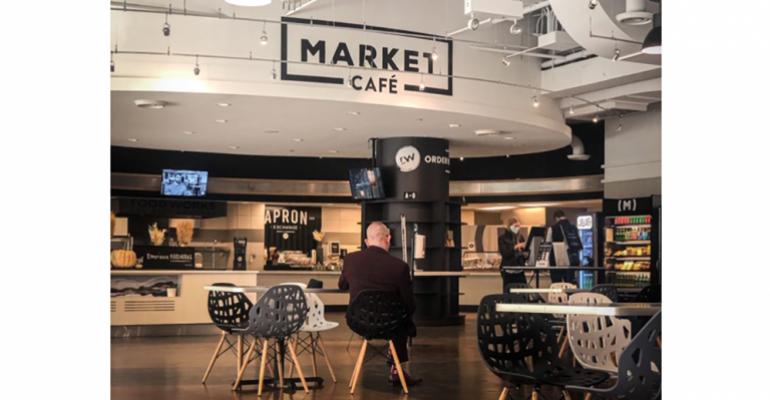 Chicago has a new local food hall and it’s trying to reclaim the experience that customers have been missing out on in this new contactless world. Market Café 300 by Foodworks opened at 300 N. LaSalle in Chicago last month, but the brand, which previously worked in the non-commercial space, has big plans to take back restaurant experiences from COVID.

Foodworks President John Coker told Restaurant Hospitality that the food hall was designed to be experienced by consumers walking between booths and seeing food and goods for themselves rather than through a digital screen, after they have spent so long indoors.

The food hall will have rotating restaurants, cafes and vendors in the space for varying amounts of time that can be extended depending on popularity, and all goods and food at Market Café 300 are made within 100 miles of the downtown Chicago location.

Though Market Café 300 is designed to be an in-person experience, it is not blind to the current reality.

Foodworks and Market Café 300 use a technology developed to allow every business, including those with non-perishable goods, to sell on a consumer-facing app in a single order, either to-go or while they’re in line.

Customers can walk from business to business buying goods through the app for a contactless experience by scanning items, including both made-to-order meals and grab-and-go meals, and paying on their phones.

“Now, more than ever, we understand that guests are looking for convenience and a contact-free dining experience where they don’t have to compromise their ability to have great food from their beloved local restaurants,” Coker said in a statement.

The app allows users to purchase food and items across all businesses that can be paid for and picked up all at once in a central location at Market Café 300 in one bag.

Similar to virtual food halls that have been popping up across the country, Market Café 300 is offering customers the opportunity to shop multiple brands and cuisines at once, but this one has a physical space, making it more of a hybrid between a traditional food hall and a virtual food hall.

Foodworks markets Market Café 300 in Chicago as a way to give restaurants who may have had a downturn in business due to COVID-19 a way to improve business and visibility by taking over a booth at its food hall for a time.

Restaurants that move into Market Café 300 temporarily must be set up for an outside catering model. Coker also said they keep everything within a set price range and restaurants need to meet those requirements if they sell at Market Café 300. In Chicago, that range is $8-$12 for a meal.

“[Customers] want a good value and there’s a lot in that range available,” said Coker. “Keeping it in that reasonable price range where you still got great value and a great experience makes it something you can afford to do on a regular basis and not just as a splurge.”

Coker says the marketplace for non-perishable goods was started as “an incubator for minority and women-owned businesses” called Apron Exchange. The vendors also cycle in and out of this space, but their goods can be purchased via the app.

There will be a full-service Tradecraft Outfitters Coffee & Tea Bar managed by trained baristas offering Colectivo Coffee. There will also be kombucha and nitro cold brew on tap with cookies and pastries from Chicago bakery Poppie’s Dough, for now. Coker said there will be rotating roasters in the space throughout the year.

Coker told Restaurant Hospitality about the experience: “Some people want to browse in that little shop and some people want to see the noodles being tossed in the pan at high heat and the aroma that comes off when the ginger hits the wok. But some people just want to feel comfortable knowing I don't really have to meet with anybody, talk with anybody, handle anything, I can go in and get what's mine, and go back to my space and enjoy my lunch in my own way.”

In August, Market Café powered by Foodworks opened a New York City outpost in the Long Island City neighborhood of Queens, and in October, the group opened its second food hall in Chicago on the Chicago River. There is a third food hall in Houston in the works. That opening was delayed by COVID but should happen in 2021.

Foodworks is part of non-commercial company Compass Group where it secures partnerships with local restaurants – most woman or minority owned – for a week at a time in onsite locations ranging from colleges to healthcare facilities. The company partnered with several hundred independent restaurants in over 20 locations as of September 2019.

Right before the opening of New York’s Market Café, Foodworks announced the creation of a new role, food safety officer, and appointed Tamara Mullin. Mullin’s role is to provide on-site support to vendors and act as a key leader when it comes to food safety including investigating vendors and their logs.