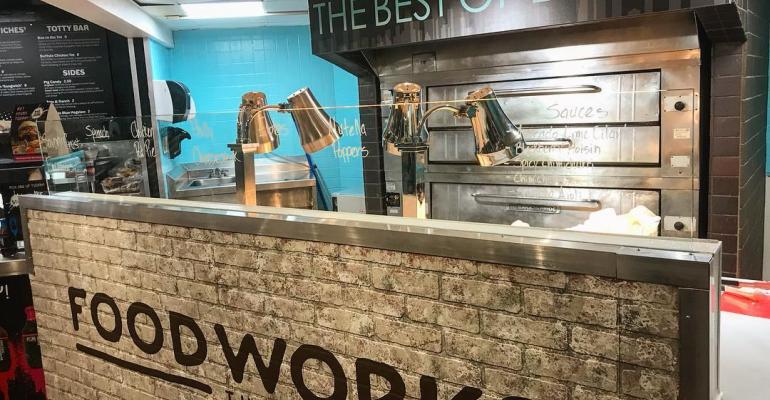 FoodWorks is now in about two dozen markets and growing fast by deploying pop-ups of local concepts in business, institutional and retail settings.

That is a trend that Compass Group latched on to when it launched FoodWorks last year. The unit’s operating model is to secure partnerships with local restaurants—often small ones, with many owned by women or minorities—and then deploy them as pop-ups in settings ranging from education and healthcare institutions to workplaces and food halls, usually for a week at a time but the schedule can vary depending on individual client and restaurateur preferences.

The host venues benefit by getting predeveloped restaurant concepts with their own menus, labor and procurement to feed their populations, while the restaurants get exposure and sales in a new location without having to invest in infrastructure. Not incidentally, they also get a foot in the door with Compass, the largest contract foodservice company in the country, which has a significant presence in every major onsite foodservice market, from schools and colleges to hospitals, corporate facilities and sports and entertainment venues.

Following its launch in the Chicago market last year, where it now operates in venues like the University of Chicago, Northwestern University—where it has five stations across the campus, including at the Kellogg’s School of Business—and at Lurie Children’s Hospital, FoodWorks has now expanded to more than 20 markets and has partnerships with several hundred restaurants.

And that’s just the start, says FoodWorks President James Kallas, who expects the number of markets to expand to as many as 30 by the end of its fiscal year.

“It’s growing so fast were just trying to keep up with the demand,” he says.

FoodWorks partners with the different Compass units to offer its service in various segments like hospitals (Morrison Healthcare), colleges (Chartwells), businesses (Eurest) and even convention facilities (Levy) but it is also increasingly soliciting clients on its own with a newly formed business development group.

“[The mini marts] are popular but, like anything, what they offer can get stale, so you get the same menu fatigue you’d get at a regular B&I location,” he explains. The FoodWorks approach “really helps in this kind of environment,” Kallas says, because it can bring in a rotation of concepts on a customized schedule to provide hot, fresh food, menu variety and excitement.

FoodWorks partners primarily with independents and some smaller chains because if clients want larger chain concepts, many of those are already available through the various Compass-operating companies. The restaurants are generally identified by “scouts” FoodWorks deploys in each market where it operates. They identify potential partners, which are then thoroughly audited on operational, financial and food safety practices before they can join the program.

The pop-ups primarily operate at lunchtime, though the service is flexible as long as a sufficient potential customer base exists, such as a third shift that would need an evening meal.

The idea of forming alliances with local independent restaurants is not new for Compass. Its Eurest unit, for example, has operated a program called Local Brands at the Microsoft corporate campus in Redmond, Wash., for many years, regularly bringing local restaurants into its several dozen cafes.

The FoodWorks brand itself has a history with the company. It was originally the name of the pioneering in-house dining operation at Motorola, which Compass acquired 20 years ago. Kallas, who has been with Compass for some 30 years, says he “always loved the name” and jumped on it for this new venture as it was available.

Restaurant and bar operators share the dos and don’ts of outdoor service
Apr 20, 2021

Here’s what the SBA’s Restaurant Revitalization Fund application will look like
Apr 19, 2021