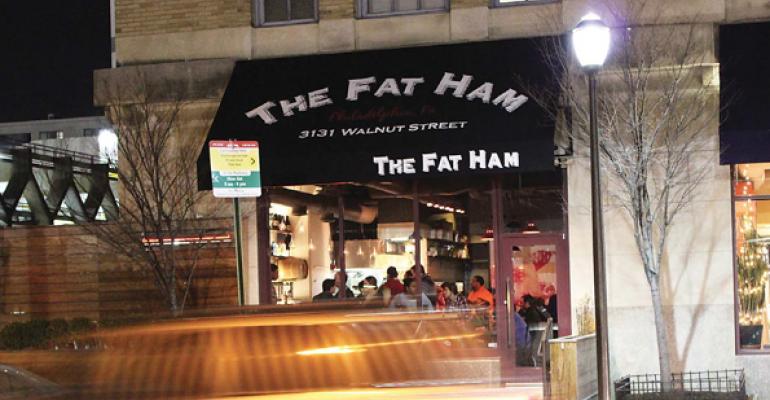 One of the best things about living in America is that no matter where you are, if you have a hankering for some type of cuisine, there’s most likely a chef in your town who will satisfy your hunger. That’s exactly the idea chef Kevin Sbraga had in his mind when he recently opened his ode to Southern country cooking in the heart of Philadelphia. His newest restaurant is called The Fat Ham and he’s offering his interpretations of Southern flavors.

“The Fat Ham is influenced by the experiences I had growing up,” he explains. “It’s a place where friends and family can gather for good conversation and a simple dinner prepared with the freshest ingredients. It’s what dining in the South is all about. It’s a communal, lively experience unlike anything else on the Philly dining scene.

Fans of Bravo’s Top Chef will remember Sbraga as the seventh season winner of that show. Unlike so many other contestants, he avoided excessive theatrics in favor of putting his head down and cooking his ass off. That same approach is reflected in The Fat Ham and Sbraga, his self-named first restaurant where he offers a $49, four-course prix fixe menu of modern American cuisine. Esquire named Sbraga one of America’s Best New Restaurants in 2012.

Before opening his first restaurant, Sbraga served as the culinary director of Garces Restaurant Group, also in Philadelphia. The group is owned and operated by Jose Garces, an Iron Chef whose restaurants have been featured in this magazine on numerous occasions. Sbraga also cooked for another big-time multiconcept creator, Stephen Starr, at Rat’s Restaurant at the Grounds for Sculpture, an arboretum in Hamilton, NJ.

Sbraga, which opened in 2011, is a showcase for the chef’s cooking chops. But he’s just flat out having fun at the pork-centric Fat Ham. Menu items are simple and homey, including dishes such as Shrimp & Grits with country ham and scallions; and Baked Macaroni & Cheese with a potato chip crust.

“About a year ago, I introduced Country Fried Lobster at Sbraga, and I wasn’t sure if it was going to be well-received by my guests,” he says.  “But it has become one of the most requested items.” That dish opened his eyes to the “lack of and longing for” Southern cuisine in Philadelphia. The Fat Ham is his opportunity to bring the essence of the south to his adopted city.

Before opening The Fat Ham, Sbraga and his chef de cuisine, Aaron Gottesman, took a culinary road trip crisscrossing the South. That’s where the menu took shape. A stop at Avery Island, the home of Tabasco, also inspired Sbraga to create his own hot sauce recipe. Together they also discovered that Southern food has many international influences, from Africa to France, which evolved into country home cooking. The Fat Ham embraces this down-home style, which explains why guest are encouraged to eat a family- style meal centered around small plates.

To complement the menu, The Fat Ham offers an extensive cocktail menu that creatively blends the flavors of the South. There’s a strong focus on whiskey and bourbon. At least two cocktails are offered on tap, including a drink called 3131, which is composed of rye, Averell, Dolin sweet vermouth and bitters; and the Boulevardier, with bourbon, Campari and Dolin sweet vermouth. You’ll also find several cocktails on tap, including a classic Old Fashioned and the Open Door, which is made with gin, Aperol and Dolin blanc vermouth.

As you might guess, The Fat Ham is a laid-back, comfortable place with 45 seats and no pretense. To invoke a Southern feel, clapboard siding washed with milk paint was used to add texture to the rustic space. Industrial lighting helps create a relaxed feel in the dining room and bar areas. Animal-themed artwork appears throughout the space, while tables are set with mixed glassware, simple dishes and sturdy linens.

Customers may walk in off the streets of Philly, but Fat Ham offers a mini culinary vacation to the South.