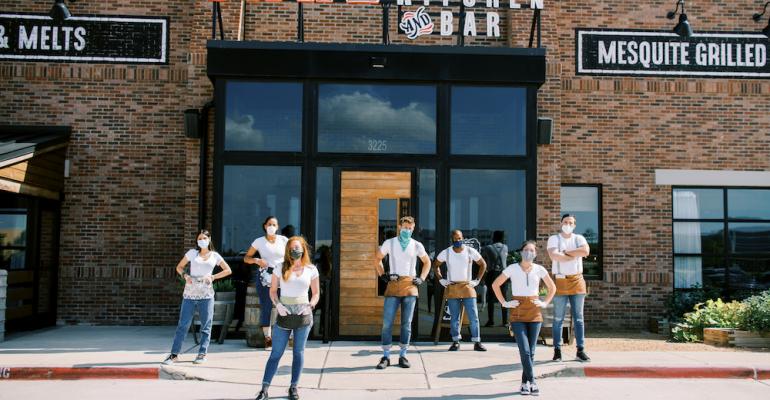 Whiskey Cake is one of the concepts that FB Society plans to expand in 2021.
Operations>Marketing

Front Burner Restaurants LLC, the Dallas-based multi-concept operator, has rebranded itself as FB Society and has announced executive appointments that were made earlier this year.

Front Burner Founder and former CEO Randy DeWitt is chairman of the newly branded company, and Jack Gibbons, who was president of Front Burner, is now CEO of FB Society.

Phillips-Luther is the former chief marketing officer of Jamba Juice and Zoe’s Kitchen, and she also owns a fast-casual breakfast and lunch restaurant in Frisco, Texas, called UP Inspired Kitchen.

In a release announcing the rebranding, DeWitt said the relaunched company reflects lessons learned during the coronavirus pandemic and will emphasize the experiential nature of the group’s restaurants.

“While so many brands were forced to retract, or even shut down during the current crisis, we made a decision that Front Burner would not only survive, but emerge smarter, stronger and more cohesive,” DeWitt said. “I couldn’t be more excited about the future of our company, the brands we have created and those we’ve yet to dream of, especially knowing that my great friend and partner, Jack Gibbons, is at the helm as CEO. Jack has long been recognized for his unmatched creative energy and operational expertise that push culinary and hospitality boundaries. FB Society is in extraordinary hands.”

The company said that FB Society would expand Whiskey Cake and Sixty Vines in 2021, and would also launch a new chicken tender concept to be called Buttercup.

As part of its rebranding, FB Society is launching a podcast, BTS: Behind the Society, “designed to engage both the team and guests and to showcase innovators, disruptors and haymakers in the restaurant space,” the company said.

Gibbons said he was looking forward to leading the rebranded company.

“While we are fully aware that the pandemic is far from over, I’ve never been more excited about the future of our company, our brands and our team,” he said. “Randy and I have long seen our mission as designing experiences never imagined, and while we have made tremendous strides already, I’m confident in saying ‘you ain’t seen nothin’ yet!’”