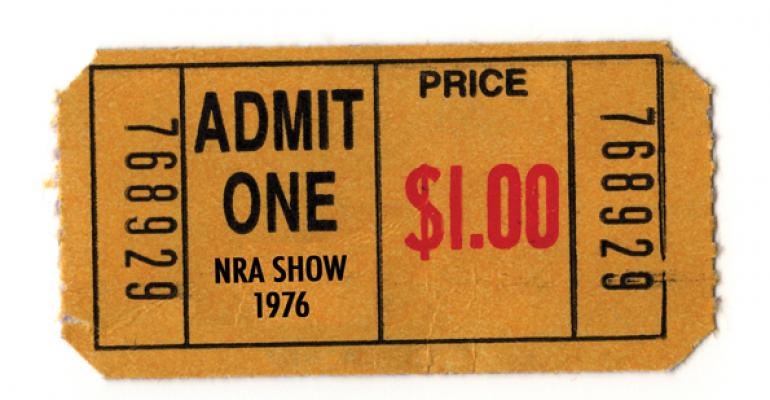 OpenTable vs. tickets: You make the call

One premise of Priceline.com’s $2.6 billion all-cash offer to acquire Open Table is that operators will continue to choose the company’s online system to handle their reservations. Restaurateur Nick Kokonas thinks a lot of them of them won’t.

They’ll be moving to prepaid tickets instead, using the system Kokonas has developed for Alinea, Next and the Aviary, the three Chicago restaurants he runs with chef/partner Grant Achatz. He’s sharing before-and-after numbers from these world-famous operations to make the case that many restaurants should make the switch.

To date, only a handful of restaurants have replaced their traditional reservation system with the prepaid ticket approach Kokonas and Achatz pioneered at their groundbreaking Chicago restaurant Next. But the ones that have—beta testers include Trois Mec in Chicago and Elizabeth in Chicago— speak highly of its benefits. You may be skeptical that the ticket approach could work for your place, but check out the operating results before you dismiss it.

Kokonas and Achatz put their ticket system in place at Next when it opened in 2011. After working out a few of the kinks, they began to use it at their three-Michelin-star flagship Alinea in August, 2012. Then they replaced the existing reservation system at their cocktail venture Aviary last November. These two installations provide a before-and-after look at the effect the tickets model can have on key operating numbers at two busy restaurants. Note that Alinea is a prix fixe fine dining operation but Aviary is “essentially an al la carte restaurant for cocktails.”

Kokonas recently wrote a lengthy manifesto about this ticket system and how it compares to competitors like OpenTable. It’s titled “Resos vs. Access Apps vs. Tix: More Than You’d Ever Care to Know.” You can read it here. His arguments are interesting, but operators are more likely to be convinced by the data he shares.

He compares results at Aviary pre- and post-ticketing. The results, according to the analysis:

• Percentage of customer no shows:  less than 1 percent. (previously 11.8 percent).
• Average per-customer check: up 13.8 percent year over year by month.
• We implemented the ticketing system in November 2013 and the results were instantaneous.
• Far more customers become aware of our premium tasting menus and ordered them.
• Number of customers has gone up 18 percent in aggregate and far more than that on weekdays, when we had excess supply to demand.
• Revenue is up 22 percent. And as anyone who owns a restaurant knows, incremental revenue gains on the 'back end' fall to the bottom line more readily than the first money through the door.”

As for Alinea, Kokanas describes the results of ticket implementation there as “staggering.”
One problem the restaurant had was “short-sat tables,” i.e., only two people show up when the reservation was for four. He figures it was costing Alinea $260,000 per year.

No more. “Bottom line EBITDA profits are up 38 percent from previous average years,” he writes. “No-shows of full tables are almost non-existent and while partial no-shows still occur, they are only a handful of people per week, at most. That allows us to run at a far greater capacity with less food waste and more revenues.”

Kokonas acknowledges that his ticketing system will likely work best with restaurants similar to Next and Alinea: “small, chef-driven, limited seating per night, high demand.” He and his team are currently fine-tuning the system in hopes of launching it as a standalone enterprise soon. He promises “several” restaurants across the U.S. will begin using it soon, as will other restaurants in Europe and Asia. “"I wouldn't be surprised to see 50 or 60 places sign up in short order," he told the Wall Street Journal. "I've had that many inquiries in the last couple of months."

Kokonas makes a strong argument for tickets, but it wasn’t enough to scare Priceline.com. The company is set to pay a staggering premium for OpenTable—46 percent over the going market price. Why so much?
"OpenTable is a great match for The Priceline Group. They provide us with a natural extension into restaurant marketing services and a wonderful and highly-valued booking experience for our global customers," says Darren Huston, Priceline president and c.e.o.

"We look forward to helping the OpenTable team accelerate their global expansion, increase the value offered to their restaurant partners, and enhance the end-to-end experience for our collective customers across desktop and mobile devices."

If, that is, the deal closes. There’s already talk that the Priceline offer might be just the first salvo in a bidding war for OpenTable.

Many other companies, both big and small, are looking to gain a foothold in the restaurant reservation space. Let’s hope lower fees are part of the package for whichever approach prevails.