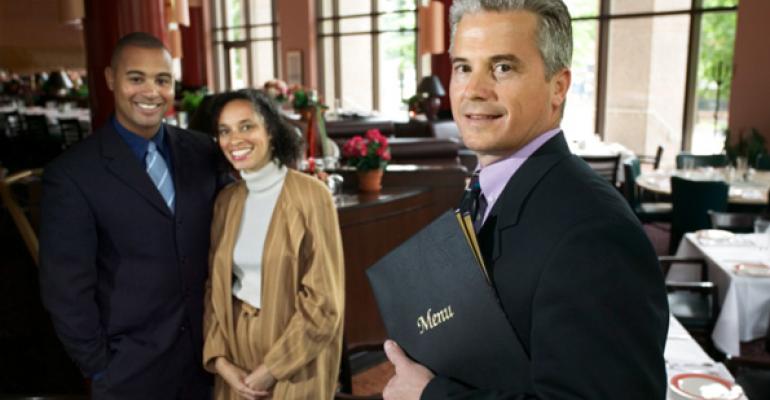 It’s the eternal question every restaurant faces: Which dining room seating policy delivers the most revenue while causing the fewest problems? Reservations are the default choice for many, but some operators are experimenting with alternative methods, including prepaid tickets and an iPad app that takes much of the pain out of a no-reservation policy.

Prepaid tickets for restaurant meals aren’t a brand-new idea. Chef Grant Achatz pioneered this approach at his Chicago restaurant Next in 2011. Meals there go for $125 with a service charge tacked on and extra fees for beverage pairings. Early on, Next was so popular scalpers created an aftermarket by posting offers for heavily marked-up tickets on Craigslist. That flaw in the system has been resolved and prepaid ticketing has stood the test of time at Next.

New Los Angeles hotspot Trois Mec is demonstrating that a ticket system can work at a less-imposing price point. Trois Mec charges $75 per set-menu meal, adding an 18 percent service charge and tax. Water is included, but wine, other alcoholic beverages and nonalcoholic beverages cost extra. Tickets are sold in advance online for two-week periods and customers who don’t click in at exactly 8 a.m. on the day of release are likely to get shut out.

Why prepaid tickets at this 28-seat restaurant, which offers two seatings per night?

“Trois Mec is a small space, and we want to create an intimate environment for our guests,” the restaurant says on its website. “Ticketing allows us to anticipate who is coming in and to give guests an all-encompassing experience at the best price possible.”

There’s little argument that from an operational and profitability standpoint, knowing exactly how many people are coming, what time they will show up and what they will eat takes most of the worry out of the restaurant business. The fact that most of the evening’s take is in the bank before the doors open makes the ticket option especially sweet from a cash flow perspective.

But all we really know about tickets is that they can work well when a red-hot restaurant is involved. At Next in Chicago, you’ve got Achatz, ’nuff said. Trois Mec, although set in a low-rent location, is a high-profile collaboration between pop-up restaurant specialist and frequent television cooking show participant/judge Ludo LeFebvre and Animal chef/owners Jon Shook and Vinny Dotolo. It was top-of-mind for foodies the day it opened.

Not everybody loves the Trois Mec ticket setup. “There could not be a less convenient way to dine,” writes L.A. Times restaurant critic Jonathan Gold. “But it may be worth the trouble to get into Trois Mec.” He calls LeFebvre, who does most of the hands-on cooking, “one of the greatest pure chefs ever to cook in Los Angeles.”

Elsewhere in the restaurant reservation universe, roughly 25,000 or so operations use online service OpenTable to handle their reservations and perform other key tasks of dining room management. An unknown number of places take a DIY approach, booking their own reservations over the phone, via their website or both. A few restaurants, including legendary Berkeley, CA restaurant Chez Panisse, just reopened after a fire, take a blended approach. Customers can secure a reservation directly by calling the restaurant between 9 a.m. and 9:30 a.m. any day and making a $25 per person deposit via credit card. Otherwise, they can book a Chez Panisse table on OpenTable.

But that leaves an estimated 250,000 restaurants that have no-reservations policies in place. A few of them are turning to technology to make this business model work better for them.

Among them is a trio of chef-driven independents whose proprietors are so well known they could go the prepaid ticket reservation route if they wanted to: Jose Garces (Village Whiskey, Philadelphia) Stephanie Izard (Little Goat, Chicago) and David Chang (Momofuku Ssam Bar, New York City). These three use NoWait, an iPad app designed to streamline the customer waiting experience.

It work this way: a restaurant host enters the arriving customer’s name and cell phone number into an iPad, which quickly texts the customer’s an estimated wait time. When a table becomes available, a second text lets the customer know their table is ready. In the meantime, customers can wander wherever they want—no more crowding in the restaurant’s bar or lobby to make sure they don’t miss their name being called.

Meanwhile, there’s a data bonanza for restaurants. They’re able to collect customers’ names and cell or smart phone numbers and gather statistics about seating and party size to help maximize throughput in their dining room.

Operators can tap into prepaid tickets, iPad apps and several other tech options to make their dining rooms run more efficiently. Just be aware that some of the sharpest minds in the industry seem willing to explore alternative ways of handling reservations at the moment and that customers are equally willing to give them a try.