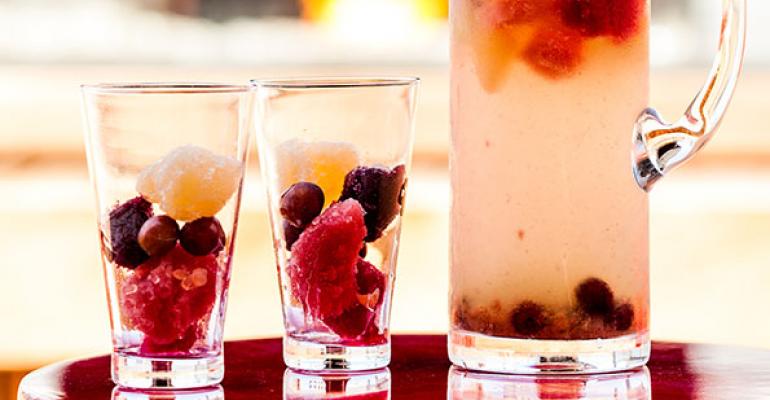 <p>White Sangria concocted by executive chef Riley Huddleston and served in a pitcher at the recently opened IO Urban Roofscape at the Godfrey Hotel in Chicago ($37).</p>
Trends>Consumer Trends

Whether it’s photos, stories, appetizers or too much information, young people today are all about sharing. The social-media surge has led us to believe it’s OK—even fun—to share just about everything.

A growing trend in bars and restaurants across the country is group cocktails, or alcoholic drinks large enough to share among a small, or sometimes even large, group. From punch bowls to 48-ounce martini glasses, patrons are drinking it up.

Crecca says the other appealing element to shared cocktails can be price point. Younger consumers are often looking for deals and discounts, and sharing the price on a drink can give them the permission to go out more often.

Operators can leverage that shared experience and value aspect when merchandising these cocktails, she said.

Take for example the newly opened IO Urban Roofscape at the Godfrey Hotel in Chicago, which offers an exclusive menu of cocktails available only by the pitcher. Groups of four can order pitchers of Spiked Root Beer Float (blended root beer float with Courvoisier), Pineapple Smash (Maui Gold with sage, ginger cordial, Gentleman Jack), White Sangria and other concoctions.

IO Urban Roofscape's director of sales and marketing Adam Schomaker said the lounge, which features views of the Chicago skyline through a retractable roof, wanted to differentiate itself with regards to what it offered.

“There are some who just want a beer or martini, but the trend is to share,” Schomaker says. “They want a social setting, smaller plates and social-type menus like tapas menus.”

The IO didn’t just up the pours on traditional cocktails—they took creating craft drinks to a whole new level.

Executive Chef Riley Huddleston, a New England Culinary Institute graduate and formerly of the Aviary, created the recipes for the cocktails, measuring ingredients by weight and testing the drinks for acid and alcohol levels. For the chef’s margarita, the fruit is juiced to order, bartenders use Don Julio tequila and Cointreau, and Huddleston has created a habanero sea salt foam that adds the salt flavor without all the messiness around the rim.

Other “Cocktails from the kitchen” at IO:

The drinks are served in pitchers with four tall glasses and range from $37 to $45—which, when broken down into four, is not bad for custom-made cocktails in downtown Chicago.