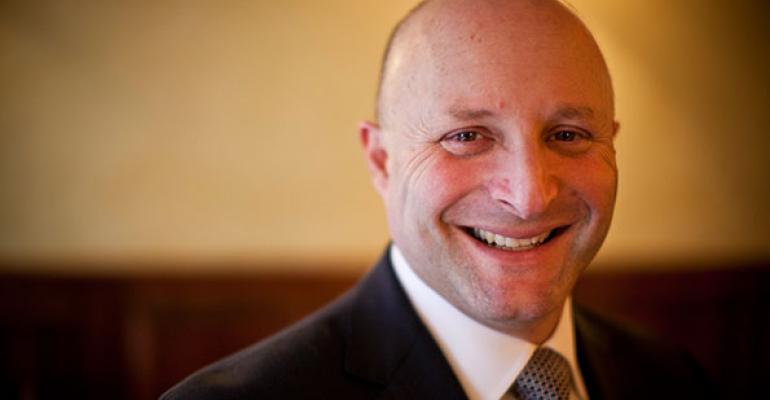 <p>Jeff Benjamin will share his front-of-house expertise in an upcoming book, due in March.</p>
Operations>Management

10 tips to polish your front-of-house service

In early 2013, uberchef Marc Vetri and his partners were kicking around the idea of opening a pizza shop in Philadelphia. Fast-casual pizza concepts were just stepping into the spotlight, and someone floated the idea of eliminating the server staff to save on labor costs.

For Jeff Benjamin, c.o.o. and cofounder of the Vetri Family of Restaurants, the idea was preposterous. Benjamin had built a career on perfecting front-of-house service and is of the opinion that, no matter where you go to eat, there’s a certain level of expectation when it comes to service.

So the Vetri team had a frank discussion and Benjamin was able to convey the message that 50 percent of company's previous success with Vetri, Osteria, Ami’s Trattoria and Alla Spina had come on the backs of superior service. Guests at their restaurants came in expecting to be treated well, he says.

“Eliminate 50 percent of what we do? That doesn’t work for me,” Benjamin said.

So Pizzeria Vetri opened as a full-service, casual restaurant dedicated to authentic Italian pizza making. A year later, it was named one of the country’s top 25 best new restaurants of 2014 by GQ. Service has not taken a back seat. Trey Popp, a restaurant critic for Philadelphia Magazine, wrote: “Save for one flighty server overcome by the dinner onslaught, Pizzeria Vetri’s staff was exceptionally pleasant on all four of my visits. And doubly so when my lunch date required a kiddie cup.”

It appears Pizzeria Vetri will accomplish what high-end Vetri and Osteria already have: become restaurants that wow diners with an attentive service staff and back it up with quality ingredients and excellent food. Benjamin has brought all of his front-of-house expertise along. He also has parlayed his knowledge into a book, Front of House, that will be released in March. Here, he outlines 10 tips that make Vetri Family restaurants tick:

1. Instill a dedication to service from the top down. A manager with a singular focus who has never bused a table won’t be able to instill the idea of taking ownership of service. A well-rounded manager or owner who has a good global vision can translate that to the rest of the staff. Benjamin was a waiter first, and says that experience shaped his outlook moving forward.

2. Serving the customer is a team effort. Benjamin says the industry as a whole must get over the fact that asking for help does not mean you’ve done something wrong. Be willing to help out, he says. “My biggest pet peeve is when an employee says, ‘Let me get your server.’ The customer doesn’t need to discern which server has been assigned to him or her. If you’re in a uniform you should be able to handle anything.”

3. The importance of daily meetings. Preshift meetings can be a chore, but Benjamin says they’re vital because they give everyone a preview of the upcoming shift. Meetings should include any information about expected guests—what drinks they like, what tables they prefer, etc. Beyond that, preshift meetings can be used as team-building time to do things like reading restaurant reviews from various newspapers and sharing information from sister restaurants.

4. Speaking of guest profiles … use them. Although some may not admit it, being recognized is something most everyone loves. So remembering what a guest likes to drink or how they like a dish prepared goes a long way to enhance the guest experience. Before technology solutions began aiding this process, Benjamin and his team used paper and pencil to keep notes on regulars. “We can always get someone in one time; it’s getting them back the second time that matters most,” he says.

5. If you really don’t know, don’t pretend. Benjamin preaches that honesty is the best policy, and he asks his servers to be transparent. For that reason, Vetri restaurants mostly shy away from table spiels. Instead, servers are trained to read the table and discern what guests need. “Don’t try to fake being good at it; that’s disingenuous,” he says. “Just be good at it.”

6. Treat guests as you would want to be treated. “As a server, be a guest. Speak to yourself,” Benjamin says. He says every member of the waitstaff is going to make a mistake at some point. Don’t be afraid to admit mistakes and, most importantly, learn how to fix them. Don’t make excuses or blame it on the kitchen, just show a willingness to be honest.

7. Have guidelines, not rules. Many restaurants expect servers to greet their table within two minutes of the diners sitting down. At Vetri restaurants, the guideline is actually 90 seconds. But it’s a guideline rather than a rule because serving is dynamic and each table may require something different. What if another guest stops the server on the way to the table? If the guidelines can’t be met, servers should know to alert another server or management, who can drop menus and pour water.

8. When it comes to clearing plates, read the table. Should servers fully clear the table between each course? Many diners want plates taken out of their way once they’re done eating. But what if one of the guests isn’t finished eating? Is it poor manners to leave one guest with his or her plate while everyone else moves on? Because of these dynamics, Benjamin says it’s imperative to be able to read a table. The rules are unclear, he says, so the rule becomes knowing what the guest wants. “If a guest actually physically takes the plate and hands it to a busser, that table is cool with pre-busing,” Benjamin says. “Do your table maintenance—if there’s an empty glass, remove it or refill it. Bring new silverware for each course. And guests should never have to ask for water.”

9. Be cautious about how you upsell. People enjoy hearing suggestions, but that doesn’t necessarily mean recommending they order the entire menu. Sometimes, Benjamin says, he’ll suggest a table of diners order one less antipasta so they’ll have room for dessert. “Be careful how much of a salesman you are,” he says.

10. Balance seriousness and fun. While all members of a service staff should take their roles very seriously, it’s important to have fun on the job as well, Benjamin says. Guests are dining out with a preconceived notion that their experience is going to be enjoyable, so live up to their expectations despite the stress that accompanies serving. “Let’s remember,” he says, “the very worst thing that can possibly happen won’t ruin a person’s night.”