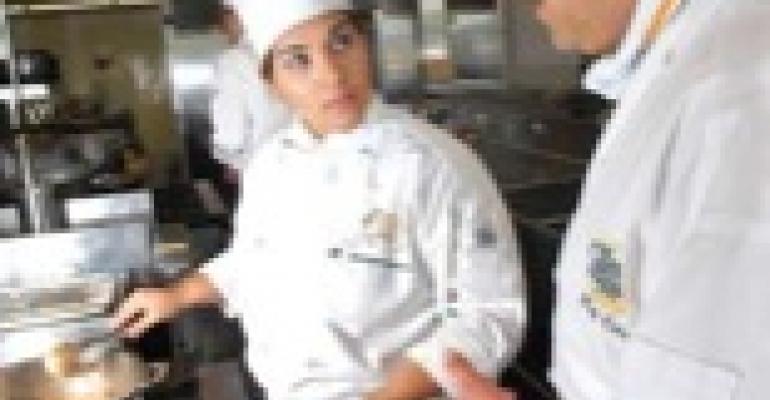 For decades, culinary schools have designed their curricula around the techniques and principles of French cooking. And why not? Graduates who come out of school with a solid grasp of classic cooking techniques and the skills necessary to produce the five "mother" sauces and myriad variations thereof can go into any full-service restaurant kitchen and start contributing right from day one.

Or at least they used to. The ever-expanding number of ethnic dishes that have found their way onto U.S. menus makes the ability to whip up a mean Bechamel or Veloute less critical than ever before. What operators need from their culinary school hires today is the ability to prepare top-notch dishes drawn from many cuisines, not just French.

Several schools have made minor changes to their course offerings to address this reality, but now two of them are going further by offering full-blown study sequences dedicated to specific cuisines.

The biggest move being made is in San Antonio, where a new Culinary Institute of America campus will house the CIA's Center For Foods of the Americas (CFA), It's a move made possible by a $28 million gift from San Antonio philanthropist Kit Goldsbury, former chairman and c.e.o. of Pace Foods.

"Our vision for the CFA is to help raise awareness of Latin American cuisines as being among the world's leading culinary traditions, with Latino chefs at the forefront of that movement," Goldsbury says.

"With the Center for Foods of the Americas, the CIA will both increase its impact on the diversity of culinary leaders and further shape the directions of the cuisines enjoyed at the American restaurant table," says CIA president Tim Ryan. "Latin American cuisines are a rich source of new food experiences innovations for our industry."

A pilot program for CFA has been in operation under CIA tutelage since 2006 in the historic Pearl Brewery building. A new 30,000-sq.-ft. facility will open in 2009. That $7 million facility will then be an official campus of the CIA, the school's third. It will enroll about 120 students each year in a 30-week certificate program, and CIA officials expect to attract 1,500 professional culinarians each year for continuing education programs and conferences. The school's Hyde Park campus will also now offer specializations in Latin American cuisines for students enrolled in its bachelor's degree program there.

Meanwhile, the French Culinary Institute in New York City has officially opened the Italian Culinary Academy (ICA). The ICA's lead offering is a 29-week total immersion course in Italian cuisine, culture and language. Students spend the their first 10 weeks in New York City, then head to Italy for, first, nine weeks of further instruction in Parma, followed by nine weeks of apprenticing at some of the country's top restaurants. Then it's back to New York for a final week of exams and graduation.

"We created the Italian Culinary Academy in response to the increasing number of people who want access to the same educational excellence and intensive training that has made the FCI such a success, but applied to other cuisines," says FCI founder/c.e.o. Dorothy Hamilton. "Whether in New York or in Italy, working hand-in-hand with top chefs, the students in the Italian program will be trained in using the FCI's Total Immersion method."