Seafood is a draw during Lent, even during a pandemic 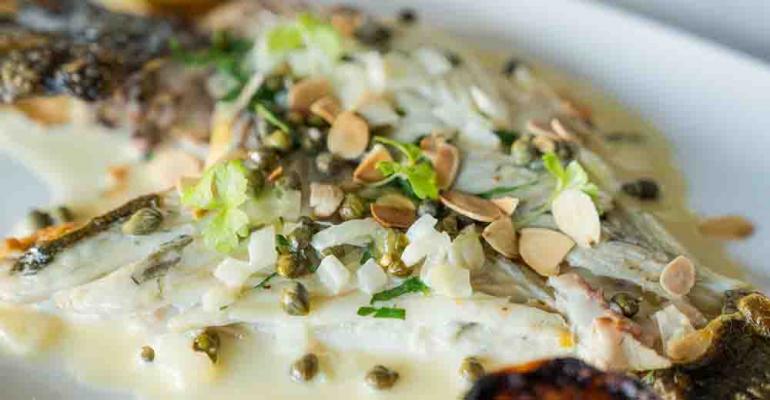 Start Slideshow ›
Customs are changing, but guests are still looking for fish at this time of year

Lent is fast approaching, and for many Americans, that means eating more seafood. That’s true even during these challenging times and as new meatless options emerge, so restaurants continue to roll out fish and shellfish dishes at this time of year.

During the 40-day period before Easter that many Christians observe as a time for self-sacrifice, Catholics are supposed to refrain from eating meat on Fridays. About 23% of the United States population is Catholic, and about 62% of them don’t eat meat on the seven Fridays during Lent (according to Pew Research and Georgetown University’s Center for Applied Research in the Apostolate, respectively). That means about 14% of the population is looking for meatless items on those Fridays, and custom points them to seafood dishes. For restaurants, the result of that is a 20% increase in seafood sales during Lent, according to menu research firm Datassential.

For the season, Thomas Laczynski, has added a large-format turbot to the menu at Ouzo Bay in Houston.

“Turbot to me is the Ferrari of fish,” he said. “It isn’t found on many menus anymore as sourcing can be difficult. It has a buttery, sweet and nutty flavor with large flakes and is a great fish for the table to share.”

Laczynski flies his turbot in daily from Valencia, Spain and serves it whole, but with the bone and skin removed, in a classic preparation: roasted and then bathed in a sauce of brown butter with lemon and white wine, and garnished with toasted almonds and capers, topped off with a chiffonade of flat-leaf parsley.

“The rich nutty flavors with the white wine and lemon juice really make the fish shine,” he said. “Brown butter really brings me back to my childhood eating pierogis with the brown butter we would make as a family.”

The dish is large enough to serve two to three people and is priced at $98.

Although seafood is traditionally the protein of choice on Lenten Fridays, recently there have been conversations about breaking that custom.

An article in The Washington Post last year in the runup to Lent postulated that plant-based meat substitutes might be acceptable on Fridays between Ash Wednesday and Good Friday.

And as the coronavirus pandemic swept the nation last year during Lent, which started on February 26, bishops in some diocese granted dispensations allowing their practitioners to eat meat on Fridays, reasoning that they had sacrificed enough during lockdown, and that making special trips to find seafood might be dangerous.

Although there are new Lenten options, and a more lenient Catholic clergy, more than half of the new seafood dishes in restaurants in 2020 were rolled out in the first quarter of the year, according to Datassential.

That’s somewhat higher than in previous years, when seafood offerings also spiked during the summer. But last summer many restaurants were focused on offering portable comfort food, which seafood generally is not. In fact, anecdotally, restaurant operators often cite fried calamari specifically as a menu item that did not travel well.

“I would love to make seafood dishes again for people,” said Eric Rivera, chef and owner of Addo in Seattle.

Before the pandemic, Addo was a tasting-menu-only restaurant, but Rivera closed his dining room in March and has focused instead on giving his customers what they need at home. That has ranged from groceries to microwavable family meals to kits with instructions that allow his customers to prepare their own tasting menus at home. Rivera considers himself a seafood expert, but he says teaching his customers to cook seafood properly at home is more of a challenge than he or his customers want.

“I’m working with people to see what they need and what they want,” he said. “Anything having to do with seafood and teaching people to cook that at home is kind of a nightmare.”

For restaurants that still have open dining rooms, seafood continues to have a draw at this time of year, especially since it’s not something many of them eat year-round.

And it actually works well for takeout and delivery, too, said Bill Nevruz, managing partner of Shaw’s Crab House, with two locations — in Chicago and the suburb of Schaumburg, Ill.

He says fried seafood travels just fine if you do it right.

That means using fresh, minimally processed fish and a fryer that’s not, but not too hot “making sure it’s really crispy on the outside and not overdone on the inside,” he said.

In fact, Shaw’s Crab House has been offering takeout since it opened 35 years ago. It wasn’t a huge part of the business before the pandemic started, “but we never wanted to do anything without it being great,” Nevruz said. “We just had to get better at doing a lot of it.”

At the Chicago location, every day is Fish “Fry” Day, from Ash Wednesday on Feb. 17 though Good Friday on April 2, with three lunchtime specials from 11:30 a.m. to 3 p.m.

The East Coast Fish Fry is beer battered Alaska cod, fried shrimp and fried calamari with coleslaw and fries. The Shaw’s Fish Fry is a larger portion of cod with fries, coleslaw and tartar sauce.

The Great Lakes Fish Fry has Lake Erie perch with lemon butter, tartar sauce and coleslaw. Each meal comes with clam chowder or lobster bisque and a dessert and is $30.

At the Schaumburg location, Fish Fridays are only Ash Wednesday and the six subsequent Fridays, but they’re available all day. The $25 Fisherman’s Platter is fried cod, shrimp, calamari, fries, coleslaw, clam chowder and Key lime pie.

Fish & Chips is similar, but the only seafood is the cod. It’s priced the same.

The Family Fish Fry Meal is a $60 takeout meal of 10 pieces of cod, fries and a pint of coleslaw, plus four slices of chocolate cake.

Quarts of clam chowder, lobster bisque and seafood gumbo are also for sale for takeout at $15 per quart with Parker House rolls on the side.

Nevruz said focusing on takeout remains the priority, “and then kind of backing into what we could do with a promotion in the restaurant.”

Lent isn’t the only event that invites seafood consumption at this time of year. The Lunar New Year, celebrated by Chinese, Japanese, Korean and Vietnamese communities, is Feb. 12 this year, and fish can be an important part of that celebration among the Chinese, said Richard Chen, the new executive chef of Red 8 restaurant at the Encore Boston Harbor hotel.

Whole fish, in particular, is an auspicious dish that symbolizes prosperity, he said, adding that eating both the head and the tail bode well for a good beginning and end of the year.

Chen is offering a whole steamed sea bass. The fish is dressed in rehydrated black mushrooms and julienne scallion, garlic and ginger, steamed and then accompanied by a broth of chicken stock seasoned with light and dark soy sauce, sesame oil, white pepper, sugar and cilantro.