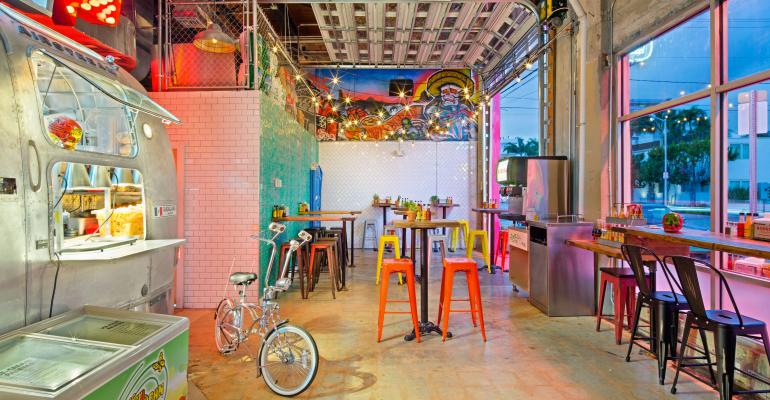 After opening Bodega Taqueria & Tequila in South Beach in 2015, featuring a taco joint in the front and a tequila speakeasy in the back, the Menin Hospitality-owned, Miami-based Bodega brand is launching a fast-casual taco spinoff. Bodega Taqueria will open three locations in North Beach, Wynwood, and Downtown Miami in 2021, with plans to open at least 10 more locations in Florida and other markets down the line.

While the food sold in the front of Bodega Taqueria & Tequila are a front for the speakeasy lounge, tacos and other innovative Mexican street food will be the star of the Taqueria spinoff concept.

“We looked internally [at the success of the taqueria front] and said, ‘we have something here that can work as a standalone,’” Jared Galbut, co-owner of Menin Hospitality said. “We can definitely do a taqueria without the tequila. And now we’re able to look at smaller 1,200-1,500 square-foot spaces and open in markets a lot quicker. It may take us six months to build out a taqueria, whereas it would take a year for the full concept.”

Bodega Taqueria's first locations will open in North Beach and Wynwood in spring/summer 2021, while the Downtown Miami location will open at the end of 2021.

“We have a roughed-up garage door on our property and the inside isn’t polished—it’s more like cinder blocks and rough concrete floors,” Galbut said. “We thought, ‘if you went to a garage, what would it look like?’ on a grander level.”

Besides the “rough around the edges” aesthetic and nod to the original Bodega concept, Bodega Taqueria is proud of its unique spin on Mexican street food. Galbut said that their chef and culinary director, Bernie Metz, has a Cuban background so Cuban influences find their way into his cooking. Much of the menu will remain the same from one Bodega to another and includes their famous barbacoa tacos, coconut shrimp tacos, and Californian burritos. The tacos range in price from $3-$4 each and the burritos range from $11-$15.

“The menus will be pretty similar, but when we get into a new market, we adapt it and hear what the customer base wants,” Galbut said. “We’ll add or subtract based on need.”

He also describes the service as somewhere between quick-service and fast-casual, where guests will be able to order from their phone and have minimal face-to-face interactions, or they can grab their food from the counter and sit down to enjoy it at a picnic bench.

Within the next 12-18 months, Galbut said they are aiming to add four additional Bodega Taqueria and Tequila full-sized concepts and an additional six taqueria standalones. The next markets they’re looking to penetrate in Florida include, Orlando, Tampa, St. Pete, Jacksonville, and Palm Beach. The next Taqueria and Tequila concept will open in Ft. Lauderdale in November.

“We have been in major expansion mode over the past year,” Galbut said.