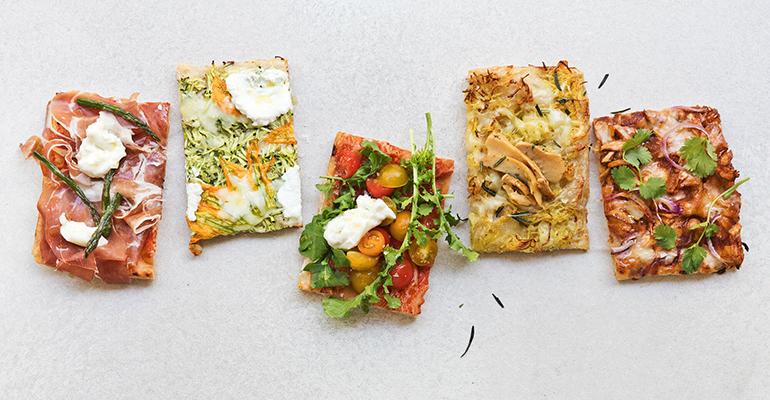 Rick Rosenfield’s Roca has a California location open, with 2 more to come by the end of the year

California Pizza Kitchen co-founder Rick Rosenfield, who stepped down as CEO of CPK in 2011 when it was acquired by private-equity firm Golden Gate Capital, is bringing another restaurant to the pizza segment with the introduction of Roca, a Roman-style pizza restaurant in California.

This isn’t California Pizza Kitchen 2.0, however, as Rosenfield has no intentions of growing the business to such heights, but he does want to grow it nationwide.

The first location opened in Glendale, Calif., as a pop-up over Memorial Day weekend, and is still open with no end date set. Last week, Roca announced one of its two full-time locations will open on the Westside of Los Angeles in Caruso’s Palisades Village later this year. A second unit in an as-yet undisclosed location will follow in the fall.

“I have always been a lover of pizza — whether it’s deep dish in my hometown, crispy New York-style, [or] California’s creative interpretations — but when I tried ‘al taglio’ for the first time in Rome a decade ago, I knew it was something I wanted to bring to the States and elevate with California’s fresh ingredients,” says Rosenfield in a statement. “We’re really proud of our product and have dedicated years to its development down to each individual source: the organic flour dough, the California tomatoes, the specialty cheeses.”

Pizza at Roca is served “by the cut” or “al taglio” —  with full and half-pan options —  and is similar in look to a thin focaccia but with elevated ingredients and fermentation in the dough to give a more complex taste.

The dough is long cold fermented for up to 72 hours by executive pizza chef Luigi Roditis who hails from Rome and lives in California, much like Roca the brand. The three-day fermentation allows for the dough to appear thick like focaccia but maintain a lighter quality on the inside.

Much like Roditis’ heritage, the name Roca comes from Rome “Ro” and California “Ca” to show that the menu is a true blending of both cultures. The traditional Roman dough and pizza style is complimented by classic California ingredients and local farmers.

Among the offerings on Roditis’ menu are the Calabrian Meatball, which is tomato sauce, house made beef and turkey meatballs, mozzarella, Parmigiano Reggiano, Calabrian chili and basil; and the Asparagus & Goat Cheese Pizza, which has an asparagus puree, asparagus spears, Laura Chenel goat cheese, mozzarella, red onion and mint.

Roca was inspired by  a visit to Rome, where Rosenfield and his wife went after selling California Pizza Kitchen over a decade ago. After coming back to America and studying the science of Roman pizza, Rosenfield and his partner decided to re-enter the restaurant business around 2016 with opening of upscale seafood restaurant Bottlefish in Brentwood, which closed permanently during COVID.

But pizza was never far from his mind.

“After Bottlefish, we thought ‘What would we do if we were getting into the pizza business today?’” Rosenfield told Nation’s Restaurant News.

The first thing to enter Rosenfield’s mind was farm-to-table ingredients, and the next was the style. As Rosenfield said, “the pizza for today is Roman.”

Part of that thinking was inspired by the pre-pandemic shift to a fast-casual business model as opposed to the casual-dining model of California Pizza Kitchen, and another part was a shift toward third-party delivery,  heightened by the pandemic. As Rosenfield pointed out, “Roman pizza travels well.”

And there’s the all-important labor element. Fine-dining and casual-dining have higher labor needs and costs than fast-casual businesses, as Rosenfield noted. But more than that, even seating is being limited in the first two locations of Roca, to cut down on labor even further.