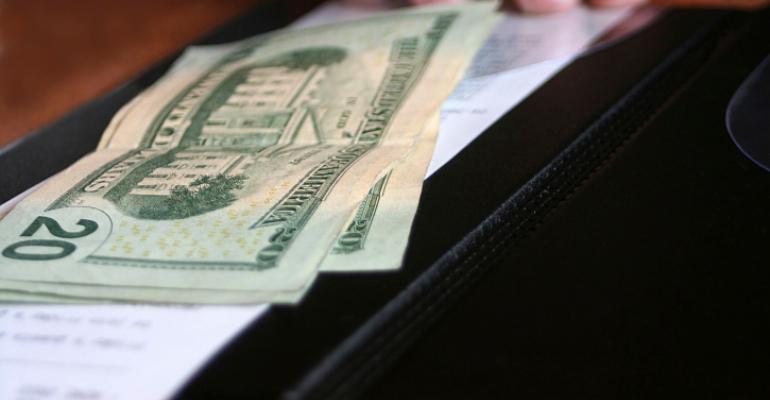 In the December 2015 issue of Restaurant Hospitality, editor Michael Sanson wrote about recent moves by two top New York City operators to eliminate tipping in their restaurants. They will boost menu prices at least 20 percent as a result. Sanson pointed out that many of his columns in the last year or two have been about how abysmal service has gotten in restaurants. Eliminating tipping, he says, will likely make it worse. Here are excerpts from some reader responses.

Whenever we make a change that impacts the guest I ask myself, “Will what I’m doing bring in more guests or fewer guests?” All things being equal, if two steakhouses serve a similar product and one is 20-30 percent more expensive for the simple fact that there is a no tipping policy, I see that as a net negative. I was brought up to believe that tips is an acronym for To Insure Proper Service. Currently, the guest has the ability to let the server know how good the service was through tipping. What control or recourse will the guest have if service was deficient in a  no-tipping restaurant? Will the floor manager adjust the bill? Then take some server pay away to compensate for the adjusted bill? My gut tells me that a tip-included-philosophy has the foundation to breed a service culture of “just okay.”

When we invoked an automatic 18-percent gratuity for tables of six, there was a sudden indifference to service with certain servers. Pool or automatic tipping punishes great employees and rewards less enthusiastic employees. Until servers are career oriented like in Europe, I don't believe the mandatory tipping policy will work. After all, most guests like to reward or remind servers of the service they've received all on their own.

Your statement regarding giving kids rewards for just showing up hit the nail on the head. I have a sports bar on a college campus and rely on entry-level college-aged employees. Many of them have never been involved in customer service. There only communication with people is generally texting, using shortcut wording and no emotion. They are timid to meet and converse with guests and are very brief. We are looking to upgrade our training to include scripts for our staff when customers arrive and depart. My biggest hurdle is conveying to them the relationship between tips and service. They generally would rather work with a larger section making minimum tips than work with fewer tables and make greater tips per table. I’ve been in business 42 years and the current staffing and training are the hardest I have experienced.  As an independent operator it’s tough.

On a personal level I don't have an issue with tipping being eliminated. Additionally I wouldn’t have an issue paying $25 or $28 for something that costs $20 now. However, many midpriced restaurants will be squeezed out because customers will move down to more casual eateries. On a professional level, doing away with tip reporting will cut down our payroll processing costs tremendously.

Back in the ’90s I worked for a fine dining establishment with French service for about six and a half years.  I actually had to come on as a bus boy even though I had waiter experience because the waitstaff was excellent at what they did and made gobs of money.  It took me a year and a half to prove I had what it took to do the job. In 1996 the owner decided to end tipping and just add a 20 percent charge on to all checks and pay the waitstaff a higher wage.  What they wanted to pay us would not even come close to what we were making. About half the staff quit.

But after dealing with a disgruntled staff, pissed off customers and sales that kept going down consistently year after year, the owner switched back to tipping around 2007. One of the old waitresses had come back as the general manager and asked me to work for her on weekends, and I totally jumped at the chance. Boy was I saddened. The place had completely changed; the damage had been done. The new generation of waiters was not the same as the old guard.

'No tipping is unsustainable'

We started calling gratuities a service charge a few years ago. This allows us to withhold some of it for manager and server support staff wages, or if a server gives poor service. We are also able to tier server pay via altering the percentage of the service charge. Servers who require minimum supervision and support get the highest percentage of the service charge. So the service charge, while flexible in terms of what the house does with it, still serves as an incentive for servers to do well. We ran it all by the Minnesota Department of Labor. We clearly state that this fee is divided among servers and support staff. In Minnesota that ensures that the service charge does in fact belongs to the house. We can now keep all of it or divide it however we see fit. This allows us to be flexible in this environment of rising minimum wage, too.

In Seattle, we face incredible pressure with a $15 minimum wage and no tip credit. The only reasonable choice is to go to a service charge model and also change how we compensate and manage our teams.

In our model, servers continue to be highly compensated, but will work a few more hours than they currently do for benefits. In Seattle, it's been standard for years to provide healthcare at 25 hours a week. In addition, we provide and pay for 50 percent of family coverage.

I think that poor service is no excuse under any model. Piss-poor service is a lack of management and holding the team accountable to deliver, regardless of what people are spending.

I operate a brewpub in a small western New York ski town. The last 20 years have been a terrific experience. However, nothing has gotten me so angry, puzzled, and downright exhausted as this new server wage hike (to $9 an hour). This will cost our pub $169,000, based on the tipped hours to date, in 2016.

That is an unsustainable cost. The answer can’t simply be to raise menu prices. There is an economic principle of price-elasticity no New York Democratic understands. Restaurant visits are discretionary, not a necessary expense, such as a gas bill. You don’t have to go out to eat, especially if it’s overpriced and comes with poor service. Menu price increases will give tipped employees an additional raise, leaving the back of the house in the dust.

Our servers earn $37-$47.00 per hour on average for every hour clocked in. Why did Governor Cuomo push to give a raise to people already earning more than four times minimum wage, thus putting our industry in economic jeopardy?  There is no money left for managers, chefs and line cooks, let alone owners who have taken all the risk.

Walmart is successful because it has low prices. The restaurant that can hold prices and provide a quality product at a fair price will win. The restaurants with servers, bussers, bartenders and hosts will cease to exist outside metro NYC.