Readers sound off on dessert service 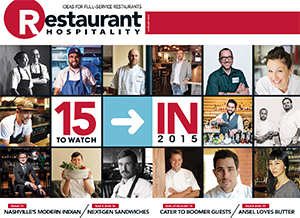 In the January issue, editor Michael Sanson discussed occasions when he’s eating lunch with friends and a check is dropped off at the table without the server asking if the table would like coffee and dessert. This happens at some places even when there is no wait for the table. He asked readers if they have a similar policy and to explain why they don’t offer dessert. He also asked if anyone is using tablets instead of menus, which he often finds less than helpful. The following are excerpts of some responses.

I wanted to take time out to comment on your “No Dessert For You” article. I own and operate two restaurants; both are casual. We train our Monday through Friday lunch servers to present the guest check(s) midway into the guest experience. There are a few reasons for this. First, we ask if the meal will be one check or separates. At lunch, more times than not, it’s separate checks. This gives our server ample time to split and print checks. We then bring the checks to the table and let the guest know that we prepared the check only for their convenience. Servers will often say, “I printed your checks in case you have to get back.” Servers never drop a check early if the guest is drinking an alcoholic beverage at lunch.

Many of our guests will take the opportunity towards the end of their meal to pull credit and debit cards out. This also allows our servers to gather and process the multiple transactions and return them to the guest as quickly as possible. Guests can then race back to work or choose to relax on our patio to enjoy the weather.

A majority of our customers order desserts at night (not at lunch). On weekend, servers do not prepare checks ahead of time. Alcohol sales are much higher and there are often no time constraints on weekends.

As for tablets, I have dined in both casual and upscale with tablets and have very mixed emotions. Being an owner/operator I understand the evolution of tablets handling a lot or all of what staff members usually handle. Many errors can be made by my staff, but I believe a staff member can sell more effectively than a tablet. When visiting an upscale restaurant with tablets recently, I looked forward to a high level of service and human interaction, but I left with a very unfulfilled feeling. With the casual restaurant I visited, their tablet did more. It even had a button that you could press if we needed anything. The manager on duty responded each time, and our server was always a step or two behind. I couldn’t help but to feel that the tablet and technology was a huge reason our server seemed lazy. Obviously gratuities are paid to human beings. This had me in a bit of a quandary. The tablet worked efficiently. It wasn’t out back having a cigarette or tending to sidework. Restaurant staff members can make good service great and make great service tremendous. We can also foul up the experience pretty well. Any effective manager can then repair and mend even the worst experiences.

My restaurants use menus and staff members. I am not sold on the tablet taking over. I actually look forward to the day that people may choose my restaurants because they prefer to interact with real, living and breathing staff members. Restaurants offer far more than food and beverage, which is why I employ as many people as I do.

I only joined the restaurant industry in 2005. During my first year, I was blessed by an industry veteran who came in for dinner with his family. We were in the weeds and one of the dishes he ordered was lagging so he told me to cancel the item. I quickly presented the check thinking they were in a hurry. He was kind enough to pull me aside and tell me that although they were not interested in waiting for the dish, I had failed to offer coffee and dessert. His advice has served me well in the years since. I often find that patrons are willing to get coffee and dessert, even if I have boxed up most of their food. Sometimes they will take a dessert to-go for a late night snack.

Where I work the pies are “homemade” and just that word can sell an item. We sometimes serve the Red Hat Ladies, who get dessert first. The additional cost on the check can be considerable in a large party. We do lose out on sales when people bring in birthday cakes for celebration but do not charge for cutting and plating, the policy of the owner.

No matter how busy you are, do not send customers away with their sweet tooth unsatisfied. Although we do not do fancy coffee, many people want that small cup of warmth to finish the meal.

As far as tablets go, with the bulk of our patrons being senior citizens, I know that a tablet menu would never work.

When to walk away

Absolutely there is a time to walk away from incremental sales.

The truth is that desserts and coffee bring very little to the check average or bottom line. The business behind not dropping off dessert menus or coffee to a table is that you make that table available much sooner for the next group who will order entrees and cocktails, which generates a much higher net return.

How often does the server go through said motions with a dessert menu only to have the guest say, “We’ll just share this or that dessert,” or “We’ll pass since we’re full.” Now that is lost money and valuable time.

When a server is busy, that time spent distributing a dessert menu and possibly needing to make espressos or lattes is an eternity for what it puts in the bank for the establishment or server’s pocket. It’s not viewed as money left on the table. Quite the contrary, moving that table along for the next one is actually found money.

Now that being said, training and culture in a given establishment should dictate that in a case when there is time, meaning there isn’t a following table, or the section is slow, dessert should be offered. Even though dessert contributes so little to the bottom line, it’s a menu item deserving of a sale. If your section was without follow-up tables or the section was slow, then then those dessert menus or a conversation about dessert should have happened.

I have been a restaurant owner since 1985, and currently own two very popular restaurants. When I first started I decided that we would always deliver a dining experience, from beginning to end, and that means dessert included. I have always had house-baked desserts and we always explain to our servers that not only is it what we are here for, but it’s easy extra money. We put a sample of our desserts on a tray, and when the time comes for dessert they are not to have any conversation about it, just bring the tray to the table and get the tray down on the table and describe each dessert to the customer. This exercise includes regulars who know it’s coming and say no, but when the dessert tray comes, more times than not someone orders something. When they say no, the servers politely remind them that when they get home later they might wish they had one then and ask if they would like one to go, and that also works.

We have had nights when certain desserts are sold out by 6 p.m, and sometimes customers will order dessert before dinner and have the server put it aside in case we run out before they finish dinner.

It is all too common that waitstaffs aren’t asking for the extra items, not just dessert. It comes down to proper training and a lack of focus on where the real money is made in a restaurant. Many independent owners are focused on buying green beans for 50 cents a case less and not taking care of the front of the house where the real money is made. If a restaurant can sell 50 desserts per day extra at a profit of $3 each that amounts to  $150 per day or $54,600 per year.

As for the tablets, they will be introduced as fast as the public will accept them. Very soon all of the fast food giants will move to them, most likely in response to a minimum-wage hike. Before long you won’t have waiters in many restaurants; you’ll have food runners. It is a shame it’s going in that direction, but if the public accepts tablets, they will be employed.