A new kind of destination opens at JFK airport 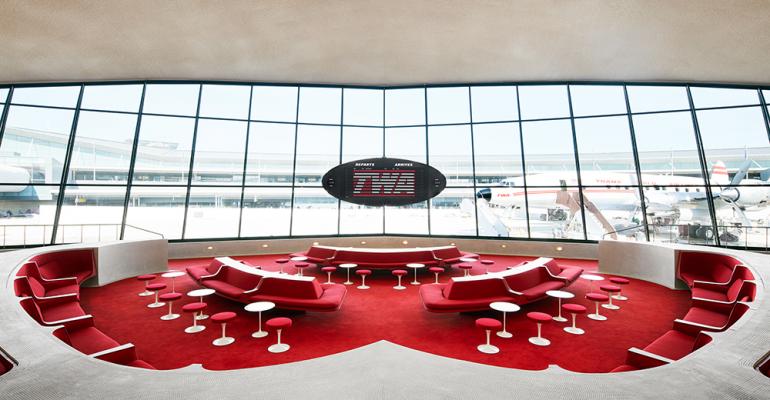 Start Slideshow ›
The historic TWA terminal is now a hotel, bustling with new food and drinks

The Trans World Airlines terminal at John F. Kennedy Airport in the Queens neighborhood of Jamaica, N.Y., has long been a subject of intrigue. Built in 1962 during an airline boom, TWA flight attendants were the crème-de-la-crème of the industry. The terminal was designed by Eero Saarinen to look like a bird in flight sitting among the mechanical flying birds on the surrounding tarmacs. The glitz and glamor of the airline industry was at its peak at the time of the opening, and although TWA is no more, the terminal has been restored as a hotel.

While this mid-century landmark — it was marked as such in 1994 and listed on the National and New York State Registers of Historic Places in 2005 — used to be a relic of the past, it is now a monument to a bygone era.

Outfitted with two hotel wings and a 50,000 square-foot event space, some of the dining destinations include The Paris Café by Jean-Georges Vongerichten, The Sunken Lounge and its own food hall called Departures Hall.

Click through to see photos and learn more about this historic space.

Hotel restaurants turn to grab and go for service during coronavirus
Jul 20, 2020

Chefs on the Move: New culinary positions at restaurants and hotels in the United States
Jan 07, 2020