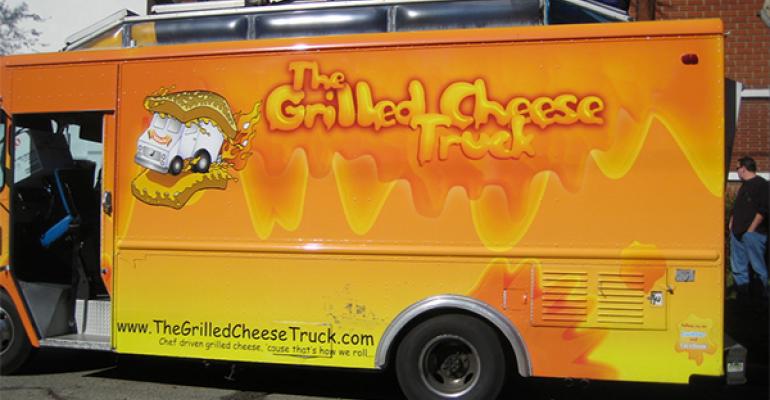 We have a winner—a big one—in the food truck wars. It’s Dave Danhi, founder of the The Grilled Cheese Truck, Inc. He hit the jackpot in late January when the company (stock ticker: GRLD) went public. Its current market value is roughly $100 million, even though the entire operation consists of four trucks.

Few operators have played the restaurant game as well as Danhi. He was just another outsider when he founded the concept in 2009. Now he is a director and chief creative officer of The Grilled Cheese Company. According to a prospectus filed with the SEC, Danhi owns close to 30 percent of GRLD (4,415,000 shares), making him the largest stockholder.

Danhi’s success doesn’t yet rival those of other high-profile entrepreneurs like Steve Ells (Chipotle) or Danny Meyer (Shake Shack), who have also seen their fast casual concepts make the lucrative journey from single-unit operation to publicly traded corporation. But The Grilled Cheese Truck, trading around $5 as we write, has plans to expand well beyond its current minifleet.

Here’s how the company describes itself and its future: “The Grilled Cheese Truck, Inc. is an American entrepreneurial ‘emerging growth’ company with a brand and menu that is widely followed throughout the nation within the gourmet food truck space. The company currently operates and licenses grilled cheese food trucks in the Los Angeles, CA area and Phoenix, AZ and is expanding into additional markets with the goal of becoming the largest operator in the gourmet grilled cheese space.

“The Company is among the first movers in consolidating the gourmet grilled cheese restaurant space with an aggressive strategic growth plan that includes significant and accretive acquisitions. The Company seeks to franchise its gourmet grilled cheese truck operations and intends to principally offer the first 100 franchised grilled cheese trucks to veterans, having invested significant time and resources over the last two years to develop a business model that provides jobs, business opportunities and support for veterans.”

Depending on your assessment of how much economic potential the gourmet grilled cheese restaurant space might actually hold, this plan could work. It’s similar to any other fast casual growth concept, except that it involves a food truck angle. On the other hand, GRLD’s chances of long-term success might also be limited by very low barriers to entry into the gourmet grilled cheese space and the ability of almost any existing restaurant to add their version of it to a menu overnight.

But gourmet grilled cheese does appear to be a viable market segment, one in which everyone from celebrity chefs to mom and pop operations to brick-and-mortar fast casual concepts can make a buck. Check out Food & Wine’s list of the best grilled cheese sandwiches in the U.S. to get a feel for how competitive and far-reaching the grilled cheese segment has become. Note that The Grilled Cheese Truck is an honoree of this list, a tribute to the caliber of its food.

But tasty sandwiches or not, some on Wall Street are worried. They think GRLD’s modest asset base and weak operating results (the company lost more than $900,000 on sales of $1 million in the third quarter of 2014) make its valuation seem dangerously out of whack. For the first nine months of its fiscal year, GRLD reported $2.6 million in sales and a loss of $4.4 million.

“I can't think of a more interesting sign of the old irrational exuberance in equity markets than a publicly traded grilled cheese truck (four in this case) business trading at a $100-million-plus valuation,” writes Bloomberg View columnist Barry Ritholz. “That sort of thing doesn't happen unless there is significant excess in the markets.”

Another note of caution: Just a few years ago, gourmet grilled cheese concept The Melt aimed to define and take over the gourmet grilled cheese space, using a fast casual approach. It has grown to 11 locations spread over the San Francisco and L.A. markets. But take a look at how The Melt’s menu has changed. Now it’s all about burgers, although there are still four grilled cheese melts on the menu.

Will a similar fate befall The Grilled Cheese Truck? Right now, the chain’s vehicles are busy making their usual stops in and around L.A. (Black Diamond Tattoo in Venice; the CVS parking lot in Sherman Oaks; preservice feeding at nondenomenational megachurch Shepherd of the Hills in Porter Ranch) and Phoenix (everywhere from the Scottsdale Miss Softball opening ceremony to the Ladies Car Care Clinic in Chandler). GRLD is still working the streets hard in its existing markets; we’ll find out soon how well its leaders execute its ambitious growth plan.