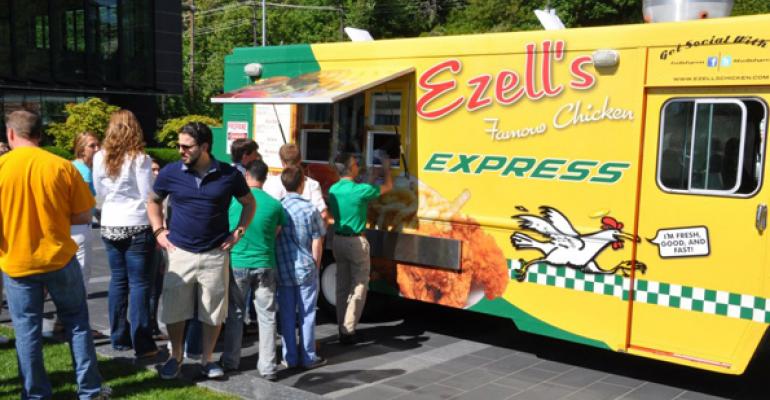 Make the most of your restaurant's food truck options

Can’t figure out a smart way to have more family members share ownership in your restaurant business? Looking for a small-scale spinoff that would produce more income for your operation without requiring any extra work? Then take a look at how and why Seattle-based fast casual chicken chain Ezell’s sold mobile-truck-only franchising rights to the daughters of its two founders.

Granted, Ezell’s had an especially strong concept with which to work. The chain operates seven stores in the Seattle area, and its food has won national praise from Esquire (“the most life-changing fried chicken joint in America”) and, even better, Oprah Winfrey (“the best chicken I’ve ever had in my life”).

However, squabbles between the founding partners led to a lawsuit and a change in Ezell’s ownership structure. Now there are eight shareholders, split between the two founding families. A new outside partner has ambitious expansion plans that would have Ezell’s operating everywhere from Detroit to Dubai.

But before all that happens, this month will see the debut of Ezell’s Express, a food truck that will feature many of the flagship concept’s products. Its owner/partners are Phylicia Davidson and Jennifer Stephens, daughters of Ezell’s Famous Chicken founder Lewis Rudd and the late Samuel Stephens. The pair purchased the franchising rights for mobile trucks from the parent company, seeing it as a way to carry on the family business.

“We are the next generation of fresh, good and fast,” Davidson says. The Ezell’s Express truck has four large capacity fryers on board, enough to keep up with what should be a sizable demand.

It’s a smart move by all concerned, one that other restaurant operators could emulate in several different scenarios.

• If you own a restaurant and have several children or other relatives who aspire to one day take over your business, you could sell one or more of them the rights to own and operate a mobile version of it now. You might be surprised at the number of younger family members who think running a food truck would be cool.

• If you don’t have family concerns, just selling mobile franchising rights to your restaurant could bring both an upfront cash infusion and additional royalty fees over time. On the other side of the deal, the chance to leverage the brand name of an established restaurant could be a huge plus for some aspiring operators.

The food truck phenomenon shows no sign of letting up. If you own a restaurant but don’t want hands-on involvement in a mobile version of it, consider the Ezell’s approach. Several of the outcomes might have positive implications for you.