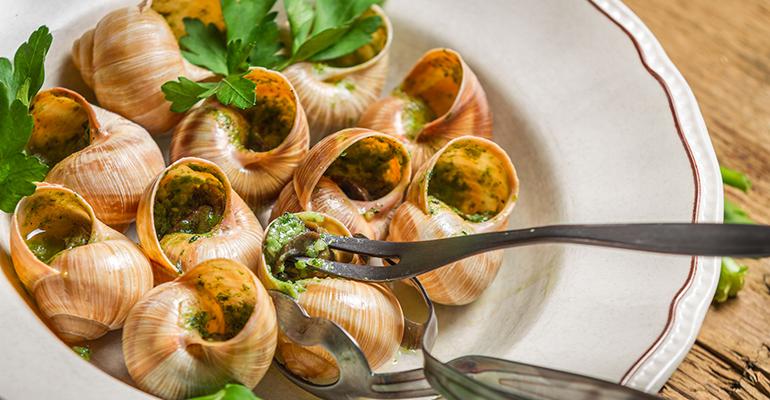 Snail comes out of the shell and onto the menu

The tiny mollusk enjoyed a brief moment in the sun in the middle of the last century, when escargots à la bourguignonne were de rigueur on menus at French and Continental restaurants, bestowing bragging rights on diners brave enough to indulge. Now snails are following other Mad-Men-era throwbacks like surf-and-turf and tiki bars by staging a comeback and turning up in a range of dishes at a range of venues.

They often receive a straight-up, traditional treatment, as at Republique in Los Angeles, where escargots en croute were served in puff pastry with garlic and parsley, or at Petit Trois, also in LA, where Burgundy escargots are bathed in the classic garlic-parsley butter. By contrast, Le Pigeon in Portland, Ore., offers a clever and contemporary variation on this theme with beef cheek bourguignon accompanied by pickled escargots and carrot pesto salad.

While we tend to think of snails in connection with French cuisine, they’re used in lots of other kitchens around the globe. Toro, a Barcelona-style tapas bar operating in both Boston and New York City, provided an authentic taste of Spain with paella de conejo y lumach, or paella with rabbit and snails.

They are also frequently paired with pasta, as at Chicago’s Girl & the Goat, where escargot ravioli is topped with bacon-tamarind sauce. Nearby, at River Roast, the slow ravioli puts snails and tomato confit over spinach ravioli, while at Sixteen, diners can celebrate spring with morel pasta, Burgundy snails and wild ramps. Meanwhile, chef Kevin Gillespie at Atlanta’s Gunshow looks to the East for inspiration with his basil-fed escargot with stewed chickpeas and Indian flavors.

Adventurousness does have it limits, however. At EL Ideas, a groundbreaking micro restaurant in Chicago, chef Phillip Foss experimented with snails in black garlic, with maitake mushrooms, smoked duck consommé that was barely gelled with sea beans, black walnut and viola blossoms. Despite its stunningly beautiful presentation and critical accolades, Foss admitted it was a somewhat polarizing preparation, a culinary bridge too far for many diners.

So, what’s the outlook for snails on restaurant bills of fare? They will doubtless remain mollusk-y muses for chefs at independent restaurants, but they won’t cross over to broader use. They’re a real stretch for many consumers, who can’t quite overcome the ick reflex. And, while they’re high in protein and low in fat, they are bred commercially at, well, a snail’s pace, and are not available in volume sufficient to supply mass-market demand.

If, however, you’d like to take the plunge, you might follow the typically savvy approach of Paris Club in Chicago, the former brainchild of R.J., Jerrod and Molly Melman, offspring of Rich Melman, visionary restaurateur and CEO of Lettuce Entertain You Enterprises. Positioned as an approachable French bistro aimed at a Millennial audience, the restaurant offered escargot at $1.95 apiece, a smart tactic that promoted trial and removed the fear factor. It also reportedly moved a whopping 400 orders of the little guys every night.