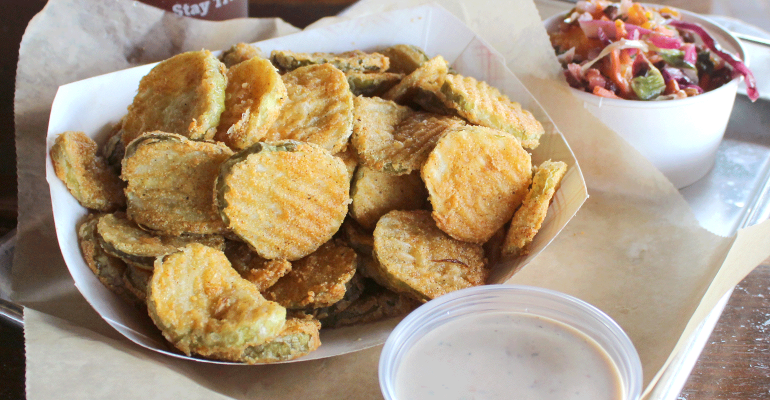 There is no question that American diners have developed a passion for pickles. As a means of delivering concentrated flavor and texture, pickles transcend geographic and culinary boundaries, and the fact that they are enjoying so much play on current menus suggests that many chefs regard them as a cure for the common condiment.

Pickling adds piquancy. An age-old method that uses a vinegar mixture or salt-water brine as a means of preserving fruits or vegetables, pickling has gotten a second wind from revived interest in time-honored cookery. Pickled vegetables provide bright tartness to dishes all year round, but in addition to ready availability, savvy chefs also prize pickles for the acidic balance they provide. Southern chefs have traditionally paired pickles with fried chicken, a practice that has gained a broader following thanks to Chick-fil-A. The powerhouse chain based in Atlanta has taken the country by storm with its signature fried-chicken sandwiches topped with pickles, and competitors both large and small have followed suit. The former includes McDonald’s Southern Style Buttermilk Crispy Chicken Sandwich with tangy pickles, while the latter includes four-unit Plan Check Kitchen + Bar in Los Angeles, whose menu boasts modern American comfort food like Smoky Fried Chicken with spicy pickled okra. Independents certainly aren’t immune to pickle power; the Curry Peanut Bisque with peach pickle at Chicago’s Big Jones comes right from the Southern playbook. And in a clever riff on the classic approach, this summer KFC is promoting Pickle Fried Chicken, in which the chain’s Extra Crispy Chicken is coated in pickle sauce and buttermilk.

As a side note, deep-fried pickles have been having a moment. Another creation straight from the heart of Dixie, the fried pickle is credited to Bernell “Fatman” Austin, who ran the Duchess Drive-In in Atkins, Ark. The original recipe is nearly as closely guarded as Colonel Sanders’ proverbial 11 herbs and spices, but that hasn’t prevented fried pickles from popping up all over. At Southside 815 near Washington, D.C., they are accompanied by remoulade on the bar menu, and at City Barbeque, an emerging 38-unit chain based in Columbus, Ohio, they’re a sharable snack or appetizer served with a side of chipotle ranch dip.

Pickling adds punch. Pickles also benefit from our ongoing exploration and embrace of Asian cuisines, where they add requisite textural contrast. At The HOB PDX, The Original House of Banh Mi in Portland, Ore., all 14 versions of the classic Vietnamese sandwich receive their pleasing crunch from customary pickled carrots and daikon, while the Banh Mi Salad at San Francisco’s Boudin Bakery mixes it up with pickled jalapenos, carrots and onions.

Middle Eastern chefs find themselves in a pickle, too. At his eponymous Shaya in New Orleans, Alon Shaya pickles cauliflower, cucumber and green tomato for a crunchy first course, and this same combination puts the personality in his Chicken Schnitzel Sandwich. Taïm means tasty in Hebrew, and in New York City, chef Einat Admony’s five-unit vegetarian menu delivers with crispy pickled onion or cabbage atop the falafel-based sandwiches and platters. Pickling adds pop. Diners eat with their eyes, and pickled foods can add jewel-toned vibrance to a dish. Souvla, which means spit or skewer, is a fast-fine concept with three units in San Francisco that takes its inspiration from the souvlaki restaurants found throughout Greece. Pickled red onions lend a rosy hue to salads, sandwiches and spit-fired entrees. At Umami Burger, one of the early chain entrants in the better-burger battle, the House-Made Pickle Plate changes seasonally, presents prettily and offers a colorful, crunchy counterpoint to the brown-and-beige, burger-and-fries menu.

Pickling adds pungency. Umami Burger’s promotional K-BBQ Burger made the top 10 burger list published by Los Angeles magazine last fall, which praised its salty-sweet-spicy flavor balance. This may reflect the influence of Southern California chef Roy Choi and his seminal Kogi BBQ Taco Truck that introduced kimchi, the pickled-cabbage Korean classic, to American menus. While mainstays like Kogi’s Kimchi Quesadilla are still going strong, Choi himself has refined his use of the essential Korean condiment; his K-Town Fried Chicken at Commissary in Los Angeles sports a sophisticated kimchi glaze.

The menu at The Bombay Bread Bar in New York City includes an array of chutneys, pickled fruits that are ubiquitous on sub-continental menus. The chutney sampler, which can be mixed and matched with a variety of breads, includes bracing coconut-chile, tamarind, and tomato-kolanji made with nigella seeds popular in Indian kitchens. Pickles pack a peck of pucker power. Aptly named Pickle Hospitality in New York City operates three concepts. Jacob’s Pickles and Maison Pickle offer American comfort foods with a range of pickles on the side; and the third venture, recently opened Lucky Pickle Dumpling Co., specializes in Asian dumplings and noodles. The latter has generated bushels of Big-Apple buzz with its unorthodox Pickle Soft Serve dessert. Gushing fans attest to its cooling craveability. And chains have a penchant for sweet pickles, too. Launched at an unsuspecting dining populace in June, Sonic Drive-In’s electric-green Pickle Juice Snow Cone Slush is available through the summer.