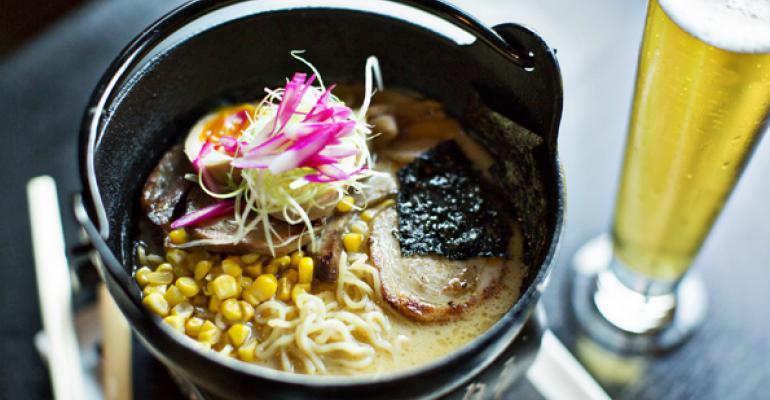 Omakase isn’t a new concept, but the leave-it-to-the-chef ordering style popular in Japan is becoming more commonplace in this country. From a new wave of omakase sushi restaurants in New York City to the recent omakase bash held in Las Vegas by the master Nobu Matsuhisa and 28 of his chefs from around the country, the word loosely translated to mean “I’ll leave it to you (the chef)” is becoming the preferred choice of many customers and more chefs.

Although it’s primarily seen at sushi restaurants and includes only raw fish, it doesn’t have to. Chef Ricardo Zarate’s Japanese-influenced Peruvian at Paiche in Marina Del Rey, CA, comes with a daily omakase lunch special, while another trending Japanese-style preparation—robatayaki—is often included in omakase offerings. In Washington D.C., where chef Jennifer Nguyen at Zentan prefers serving omakase style, her ramen is a frequent (and favorite) course.

Some restaurants have even scrapped the traditional a la carte menu completely. At the new Zo in Los Angeles, chef Keizo Seki offers only a $145 omakase tasting menu. Journeyman in Boston has foregone a menu since it opened in 2010, offering only a $75 dinner left to chef/owners Tse Wei Lim and Diana Kudajarova.

The omakase approach at many restaurants has evolved into a more traditional American tasting menu, but true omakase ordering is more personalized to the individual customer, based on the chef’s whim at that moment and the freshest ingredients available. For Tony Messina, chef at Ken Oringer’s Uni Sashimi Bar in Boston, omakase falls somewhere in between. He starts with lighter dishes and builds to more substantial offerings, and each, he says, is more than just a bite or two.

He left more traditional French and Italian fine-dining kitchens to enjoy the freedom and creativity he’s afforded at Uni. “The leeway, ingredients and techniques allow me not to get bored,” he says of the job he’s had since last September. “We change the menu every day and I get to play with ingredients from all over the world, not just Japan.”

The omakase menu at Uni has three levels offering eight courses ($95), 10 ($115) and 12 ($135). Customers can supplement those options with caviar, white truffles and sometimes Japanese-graded Wagyu beef.

Why consumers seek out omakase

Messina believes the growth of omakase reflects consumers’ quest for good food and good times, which is partly why fine dining has fizzled in recent years.

“There’s no pretense about it. It’s fun and casual, you can kick back and relax and you’re not going to have to go through the rigamarole of the French style of service,” he explains. “You don’t have to wear a suit and tie. You can come in and try some ingredients you’ve never heard of in ways you never thought of. The point of it is a good time. It’s the same approach to food as in fine dining, but more relaxed.”

He estimates 50 percent of his customers order a la carte, while a quarter leave it to him and his staff. The rest are a combination of the two. When a diner entrusts him, they will receive a combination of semi-regular dishes and many off-menu creations based on that day’s freshest ingredients, his or his servers’ interactions with the customer and new preparations he’s testing.

“Sometimes it’s just random and sometimes it’s a server telling me something like they don’t love mushrooms, and other times it’s me chatting with them,” he says of how dishes can vary from table to table, and even person to person.

Messina says serving omakase style doesn’t necessarily drive profit, because customers are getting better value ordering that way, but he believes it does generate repeat business.