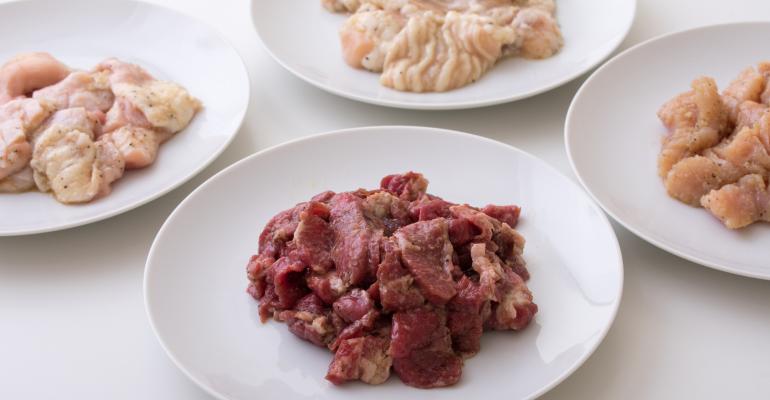 Acceptance of animal extremities and innards in dishes grows

One of the consequences of nose-to-tail cuisine, the movement that embraces a waste not, want not approach to using animal protein, has been the growing acceptance of offal, also known as variety meats.

Until recently, animal extremities and innards like brains and hearts were a serious turnoff to most American diners, who had been spoiled by the ready availability and relative affordability of prime cuts of meat. But the recession caused many consumers to put the brakes on steaks, and it led chefs to reconsider ingredients they had previously tossed.

A while back, The New York Times proclaimed butchers as the new rock stars. In response, award-winning restaurateurs have doubled down on their own star status by opening butcheries-cum-bistros. Paul Kahan’s Publican Quality Meats in Chicago serves a simple menu in its on-premise dining room and supplies other restaurants like Kahan’s The Publican, which offers fried pig brains with apricot and charred herb salsa. In Washington, D.C., Nathan Anda operates Red Apron, a butcher shop that focuses on locally sourced meats. The menu at his adjacent The Partisan features edgy kung pao sweetbreads with peanuts and orange zest. April Bloomfield’s White Gold Butchers in New York City is a full-service, whole-animal butcher shop and eatery with offerings like grilled chicken hearts with cilantro verde. Beef tongue, prized in many ethnic cuisines but historically shunned by mainstream diners, has been turning up all over. Cleveland’s hip steakhouse Urban Farmer puts it on the housemade charcuterie board, while New York City’s North End Grill pickles it. In Chicago, Girl & the Goat’s menu includes a comforting braised beef tongue with masa, beef vinaigrette and salsa verde, and in Nashville, Tenn., Pinewood Social dishes up a beef tongue Reuben. As an aside, tongue has reportedly become all the rage in Japan, where hundreds of restaurants have promoted it as a fashionable new cut of beef. Meanwhile, back in Chicago, Girl & the Goat changes things up with duck tongues with tuna and black bean poke.

Animal fats have come roaring back into fashion as a cooking medium of choice. At Cockscomb in San Francisco, chef Chris Cosentino, a pioneer in the whole-animal trend, uses beef suet to make crust for meat pies, and side dishes include duck fat cauliflower with chili, garlic and mint. Chicago’s Bang Bang Pie Shop has made a selling point of the lard used in its pastry crusts. Los Angeles-based Top Round, a beef-sandwich specialist, is among contemporary concepts that tout the use of beef tallow as a frying agent for hand-cut French fries.

Wildcraft in Culver City, Calif., has gotten rave reviews for tendine, beef tendon chips with smoked paprika, citrus and oregano. Dame in Portland, Ore., puts chicken hearts with peach, cayenne and fennel flower on the appetizer listing, while Urban Farmer in Cleveland goes with a combination of beef hearts and sweetbreads with a sexy espresso béarnaise. Also in Cleveland, the brunch menu at The Greenhouse Tavern boasts crispy pig ears with sesame BBQ sauce and the attention-grabbing Face & Eggs, with roasted pig’s head and fried eggs. Most of the offal action has been driven by independent restaurants, where the prevalence of pork belly has long since reached cliché status. Now some chains are also experimenting with the uncured bacon. Così, the fast-casual sandwich specialist, promoted pork belly banh mi in a special Asian ginger sauce. And last fall, Arby’s, which resuscitated its business on the basis of unbridled protein-centricity, ran a Smokehouse Pork Belly Sandwich limited-time offer.

A couple of years ago, Bon Appétit magazine published a story titled “Why Chefs Are (Finally) Cooking with Blood,” which examined the myriad uses of what it dubbed “the final frontier of all things offal.” Chefs are using blood as a flavoring agent, thickener and essential ingredient in a wide range of ethnic dishes, like Austin, Texas, chef Paul Qui’s dinuguan, or Filipino pork blood stew. Chef Alex Stupak opined that it is an ethical imperative for chefs to use all parts of a slaughtered animal. Whether consumers are ready to follow them on this walk on the culinary wild side remains to be seen.