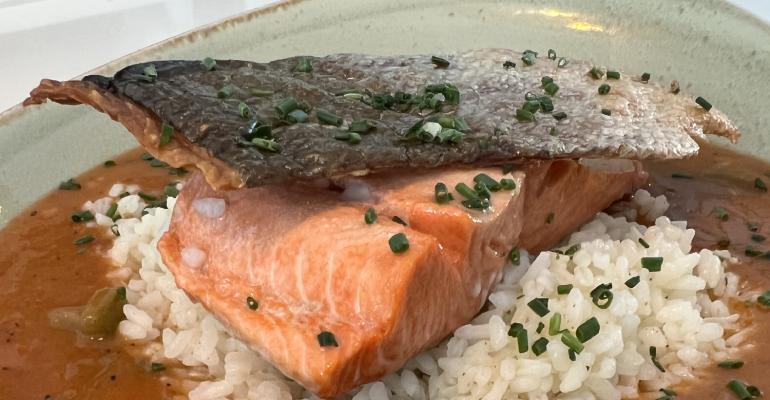 The St. Paul celebrity chef poaches the fish in oil while crisping the skin separately

As wild salmon season kicks off, chef and restaurateur Justin Sutherland shows his own approach to cooking the fish, poaching sockeye salmon at 150 degrees Fahrenheit in olive oil infused with shallots, garlic, bay leaf and peppercorns. But first he removes the skin, which he calls “the chicharrón of the sea,” and bakes it separately to make it crunchy.

Sutherland operates a number of restaurants in St. Paul, Minn., including Handsome Hog, Pearl and the Thief, Chickpea Hummus Bar, Obachan Noodles & Chicken, Side Chick, The Gnome and Woodfired Cantina. He also competed and won on Iron Chef America and was a top-five contestant on season 16 of Top Chef.

Related: New on the Menu: A Haitian salmon burger and a sports bar’s vegetarian sandwich