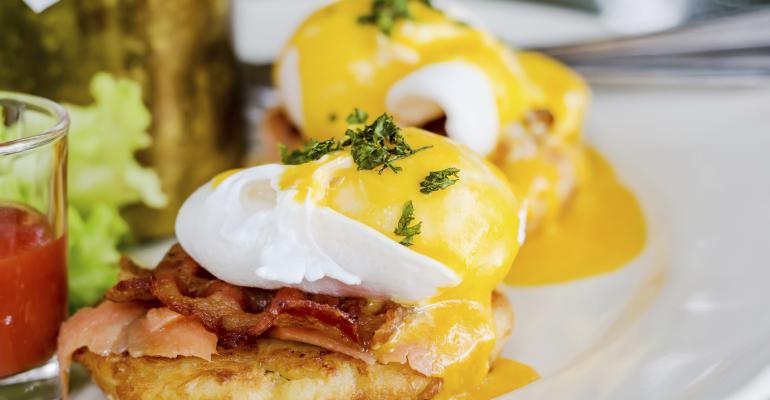 Eggs, pancakes and breakfast proteins do not have to be unexciting just because consumers are eating them first thing in the morning. For some, the morning meal is the best time to inject bold flavors into the menu. Chefs and operators are finding that offering nontraditional, robust flavors at breakfast and brunch can help drive sales in this growing daypart.

Increasingly, the morning daypart is being opened up to more experimentation. For example, 68 percent of chefs polled for the National Restaurant Association’s What’s Hot 2016 Culinary Forecast, say ethnic-inspired breakfast items are a hot trend — ranking No. 16 in the survey's Top 20 Food Trends.

Not all operators are introducing new and exotic ingredients to jumpstart their morning menus. At Matt’s Big Breakfast in Phoenix the menu focuses on the basic American breakfast such as eggs, toast and other classic items — but with some elevated flavors. “The way we gained loyal customers and notoriety is that we always focus on what tastes good, seasoning our food really well and using top-quality ingredients,” says Matt Pool, who is co-owner with his wife of the three-location eatery. “We don’t add a bunch of stuff just to be different. We season our food the way we think it tastes great.”

Pool says he buys bacon from a local butcher, and serves thick-cut pepper bacon. “We don’t even say pepper on the menu; we just say bacon,” Pool notes. “Occasionally someone will say it’s too much pepper, but 99 times out of 100, they say it tastes great.”

One popular menu item is The Chop & Chick, which consists of two eggs and a skillet-seared Iowa pork rib chop that is marinated in pesto, and served with toast and potatoes. “People know it tastes better than the average pork chop,” Pool says. “Sometimes people throw a pork chop on the grill and you’re lucky if they put salt on it.”

Matt’s Big Breakfast, which will soon open a fourth location in Tempe, Arizona, offers eggs Benedict on Thursdays. Pool makes the hollandaise sauce from scratch, and includes “a liberal dash” of TABASCO® Sauce. “One of our mottos is scratching cooking, honest ingredients,” he says. “We don’t put five different hot sauces on the table. We find what we like.”

Egg-stra flavor
Eggs are a great vehicle for adding flavors. At Third Coast Spice Cafe in Chesterton, Indiana, the bestselling omelet on the menu is the Third Coast, with peppered bacon, caramelized onion, avocado, tomato and sharp cheddar cheese.The restaurant also offers several chef blends that customers can add to their build-your-own omelets. “When my wife and I created the restaurant eight years ago we decided we wanted to provide something different for people,” says David Wodrich, co-owner and head chef.

One popular choice is the poblano pepper sauce, a thick sauce made from peppers that are roasted in-house with added spices. There is also a Kalamata olive relish with Kalamata olives, parsley, olive oil and red wine vinegar.

While millennials are often the consumers who seek bold new flavors, Wodrich says the menu appeals to people of all ages and backgrounds. “The main thing about adding flavors at breakfast is you can’t go too far out from the norm,” he says. “It has to be somewhat recognizable.”

Kimberly collaborated with the musician Slash, and named the menu item after a song on his most recent album. “He wanted something spicy and fun, and he knew I could make it happen,” she says. “He loves jalapeño and chorizo, so for me this made it easy. I love working with bold, intense and spicy flavors as well as interesting textures, which the grilled jalapeños and red onions definitely provide.”

Other spicy dishes on the menu include Omelette “My Soul,” filled with a choice of chicken, shrimp or steak, green chiles, jack cheese, topped with sour cream, avocado and fresh salsa. There is also Sunset People: eggs scrambled with thick-cut bacon, pork apple sausage, jalapeños, potatoes, green onions, provolone cheese and “a shot of hot,” served with chile-cheese toast. “I think people like awakening their taste buds any time of day, and at The Griddle Cafe they get treated with sweet, spicy and unique menu items that surprise them in the best way with each and every bite.”

Sometimes people want flavors at breakfast or brunch because it is not the first thing in the morning for them. At The Chicken or the Egg in Beach Haven, New Jersey, owner Mark Cohen noticed that people were ordering Buffalo wings at 8 a.m. “We are open 24 hours a day, so for some people it’s not breakfast,” he says. “They are still out.” [It might be the middle or end of their working day.]

The menu offers 17 different sauces which customers can add to their eggs. The newest is Swamp Sauce, named for the bayou in Louisiana where Cohen tasted a sauce he wanted to replicate for his Jersey shore eatery. The new item is a chipotle barbecue sauce that took Cohen four days to perfect. “I was the only one who had tried it in New Orleans, so I couldn’t ask anyone if this tasted like it,” he says. “Now it’s really a popular sauce.”

The Chicken or the Egg also lets customers “surprise your home fries,” which means letting them add peppers, onions and jack and cheddar cheese. “I think that people are looking for new and different,” Cohen says. “Obviously there is a segment of the general public that doesn’t want change, and all they ever order is two eggs, toast and bacon. But the majority is looking for new and exciting. New always sells, especially if it’s something that’s got some pizazz.”