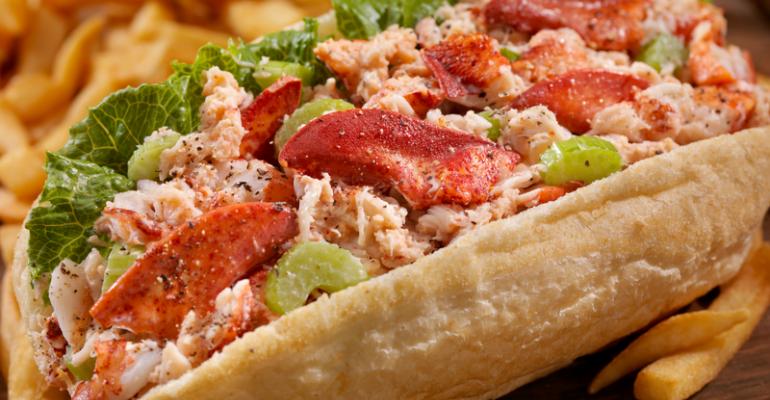 Since its inception, the lobster roll has been a favorite among chefs who relish putting their creative imprint on the popular sandwich resulting in a wide variety of tantalizing options.

Originating at Perry’s restaurant in Milford, Conn., in 1929, according to John Mariani’s “Encyclopedia of American Food and Drink,” the lobster roll can be served hot or cold.

Often considered a summer “must,” lobster rolls have found their way onto menus from McDonald’s to high-end eateries, and are gaining traction coast to coast.

“Even McDonald’s is offering lobster rolls [called the McLobster in Canada] but only in select locations in the Northeast. That certainly speaks to the iconic nature of this menu item,” says Maeve Webster, president of Menu Matters and trends analyst.

“There is no shortage of lobster rolls on menus, for sure. Lobster rolls mark the summer season and spark memories of ocean breezes,” he says.

“We do menu lobster rolls in both Nubb’s and the Tiller restaurants as well as on our catering menus,” he says. “We have great success with our sales of lobster rolls.”

Traditional lobster rolls are filled with lobster meat soaked in butter and served on a steamed roll such as a hot dog bun. Variations include diced celery or scallion, mayonnaise or TABASCO® Sauce, and experts say these days, the sky’s the limit.

“I personally would love to see a lobster roll sandwich paired with shishito peppers as a side dish. That’s certainly one way to spice up a meal,” says Amy Myrdal Miller, president and founder of Farmer’s Daughter Consulting. “And of course you could always add some minced chiles to the lobster salad.”

At Yale University in New Haven, Conn., lobster rolls are a good fit. “We are on the Connecticut shoreline. Lobster rolls are part of the culture,” says Ron DeSantis, director of culinary excellence at Yale. The university's unique approach to lobster rolls is to menu mini versions.

“Lobster rolls in many forms are always a favorite,” he says. “They taste great; the bun contributes to the experience and lobster has a 'wow' factor and perceived value.”

DeSantis says telling a story is the best way to market a lobster roll. “Who is the fisherman? What region is the lobster from? Is there anything special about the lobster being served that makes it interesting?”

Myrdal Miller says she would market lobster rolls with a playful name. “If I had a restaurant and was trying to get millennials to order lobster rolls, I’d call it the 'Hot Dog’s High Brow Cousin.' You need to make the unfamiliar seem more familiar.”

Dan Beck, president of Mason’s Famous Lobster Rolls, an Annapolis, Md.-based fast casual concept has a theory about the spreading popularity of the sandwich.

“As Americans become more mobile, folks are relocating from New England to cities like Houston, Atlanta and Nashville, and bringing demand for their favorite food staples with them,” he says. “Lobster is an aspirational food item with high awareness. Before the prevalence of lobster rolls, customers had to go to a seafood restaurant with a bib and a nutcracker and a high price point to experience it. Not so with lobster rolls.”

Despite the wow factor of lobster, lobster rolls can be good for the bottom line.

“Operators need to buy smart and price accordingly,” says Beck. “Consumers are not afraid to pay a higher price point for something they know is likely to be more expensive than more common fare. A lobster roll need not be higher priced than typical seafood items already on the menu.”

At McCarren Hotel & Pool in Brooklyn, N.Y., an authentic Maine Lobster Roll is served “Ballpark style” from hawker boxes by the hotel’s outdoor pool in the summer months. The dish, which is priced at $17, comes with a generous portion of fresh Maine lobster and celery leaves, lightly dressed with truffle aioli on a toasted Balthazar Bakery bun.

At The Watergate Hotel in Washington, D.C., the Lobster Roll on the lunch menu at Kingbird restaurant sells for $26 and is served on a brioche bun with yuzu mayo, scallions and a side of housemade potato chips.

Executive chef Michael Santoro says the menu item is popular, especially in the summer. “Lobster rolls started becoming very popular maybe 10 years ago. I have been seeing this more and more in the past year or so. They are a perfect lunch item to offer in the summertime. They are tasty, fun, simple and satisfying, which gives them broad appeal,” he says.

Chojnowski says whether a restaurant offers traditional lobster rolls or those with a unique twist, both can be tantalizing options.

“Either serve the best traditional lobster roll in the neighborhood so that everyone is talking about it, or do something completely different from anyone else,” he says.