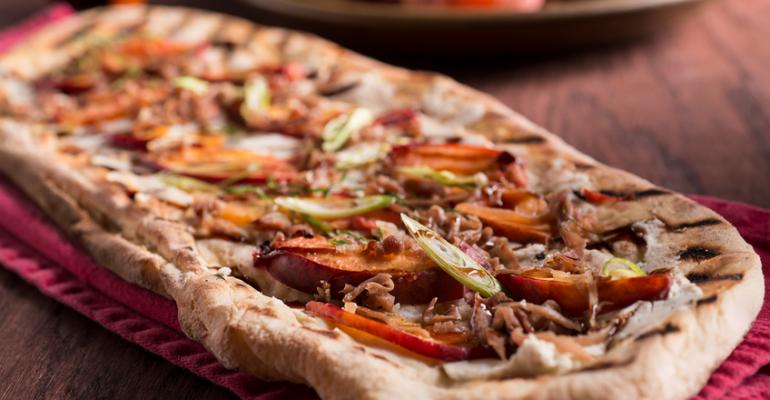 Individual gourmet pizzas have emerged as one of today's hottest concepts — and not just because pizza ovens operate at 800 degrees. For consumers, part of the appeal lies in their ability to customize their pies by selecting from a new wave of creative, more adventurous toppings that can include everything from nontraditional fruits and vegetables to specialty cheeses and hot sauces.

Operators say these bold, new selections are particularly attractive to younger consumers. “Millennials will be outspending baby boomers by 2020 and are driving changes in the way we eat,” says Scott Goodrich, chief operating officer of Uncle Maddio’s Pizza in Atlanta, Georgia. “Millennials are demanding premium toppings and unusual tastes that are difficult to recreate at home.”

Hot sauces — either made in-house or branded variations like TABASCO® Sauce — are among the ingredients that have been gaining in popularity with millennial consumers. PizzaRev, which is based in Westlake Village, California, recently added a selection of nine hot sauces that consumers can include on their pizzas. They include mild offerings such as Caribbean-flavored Mango Scotch Bonney and sweet Peach Vidalia to Garlic Habanero, Jalapeño or the super hot Ghost Pepper, for customers seeking a sauce that can crack the higher numbers on the Scoville heat scale.

Nicholas Eckerman, co-CEO, president, and cofounder of PizzaRev, says the 45-location chain got the idea from its major investor, Buffalo Wild Wings. “We took a page from their playbook,” he says. “It’s not common for hot sauces to be in pizza restaurants, but I would always eat my pizza with [hot] sauce.”

The pizza chain responded to demands from consumers who desire even more customization for their pizza. “People have been creating pizza toppings for hundreds of years,” Eckerman says. “Let’s think outside the box:  What do people want?”

Sometimes consumers are looking to top their pizzas with nontraditional vegetable selections. At Bellevue, Washington-based MOD Pizza, Brussels sprouts and cauliflower have been getting much attention lately. Culinary manager Brian Figler says much of the appeal is in the quick caramelization that delivers flavor, texture and color. “Most people think of Brussels sprouts and cauliflower as afterthoughts on a plate for Thanksgiving or a fresh vegetable platter at a party. But by seasoning them simply and then roasting them in the oven at a high temperature, they become so amazing.”

MOD Pizza designed seasonal pizzas around Brussels sprouts and cauliflower. “A lot of thought went into finding other ingredients to play nicely with them without covering them up,” Figler says. “The original goal was to aid the flavor of Brussels sprouts by making them taste nutty and rich, and we were able to do that by adding an extra ingredient like gorgonzola or bacon, and then finishing it with a balsamic fig glaze that added a contrasting acidity to help mellow and balance the final pizza.”

MOD did the same for the cauliflower, Figler says. “The vegetable’s earthy tones needed to be offset with brightness, so the addition of Mama Lil’s Peppers brought that balancing act together.”

Pie Five Pizza Co., a subsidiary of RAVE Restaurant Group, introduced some new ingredients last year, including chicken sausage, corn, vegan cheese and other unusual toppings. Customers opt for these on impulse because the ordering process is very visual. “Even if they have their regular pies, they see all the toppings and they say, ‘What’s that?’” says Patty Scheibmeir, vice president of research and development and product innovation for RAVE. “They can experience a little bit of something new and they feel good about it. It makes it more fun.”

Pickled vegetables have emerged as another of today's hot trends, she says. In the National Restaurant Association’s What’s Hot 2016 Culinary Forecast, pickled vegetables ranked fourth among sides/starches. “If you can make it familiar for customers — something like pickled red onions — they might be willing to try it,” Scheibmeir says.

Nontraditional toppings also have to combine well with other ingredients. At Papa Murphy’s, based in Vancouver, Washington,  sundried tomatoes work well on create-your-own pizzas and also on the chain's menued gourmet pizzas. “Sundried tomatoes are not found on the menu of any of the big brand players,” says Michael Miyahara, chef and director of product development. “They can be found on our Herb Chicken Mediterranean Gourmet Delite  thin crust pizza,” which also includes olive oil, garlic, whole milk mozzarella, fresh baby spinach, feta cheese and the newly introduced chicken raised without antibiotics.

Miyahara says sundried tomatoes appeal to customers with a developed palate who enjoy gourmet flavors. “Besides totally complementing the Herb Chicken Mediterranean, they are a great way to add depth with a familiar and concentrated flavor of tomato,” he says. “It is more complex because salt is used in the drying process, which creates a topping that is both sweet and slightly salty.”

In the meantime, pizza specialists across the foodservice spectrum continue to explore new avenues of flavor by menuing unusual toppings that provide adventurous consumers with a unique dining experience.

Sponsored Content
How to drive success for your restaurant
Nov 01, 2022