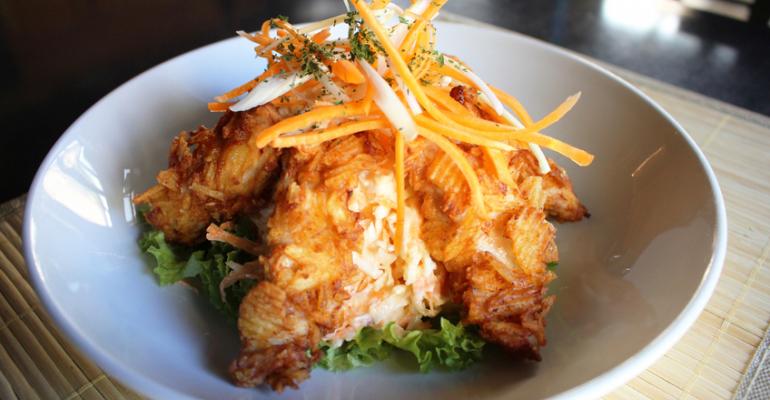 From traditional Southern fried favorites to hot new interpretations, restaurant operators are menuing a variety of fried chicken selections that satisfy consumers’ cravings for bold versions of their old favorite.

Fried chicken has become more popular than ever as chefs devise creative iterations to satisfy many different taste preferences. Operators say the key is to add new, adventurous levels of flavor that elevate the time-tested fried chicken to innovative new menu heights.

Fried chicken has been a longtime favorite food in the South, but people everywhere enjoy it, says Jonathan Elwell, campus executive chef at Georgia Institute of Technology in Atlanta. Every Thursday night fried chicken is featured in the campus dining rooms and the student center. In fact, it has become such a popular night, says Elwell, “that faculty and students line up down the hall and downstairs. They love fried chicken. Everyone grew up with it.”

Elwell points out that fried chicken transcends different cultures, which appeals to Georgia Tech's diverse student population. “You see people of all ethnicities in there enjoying the fried chicken,” he says.

Often the differences in the various ethnic versions of fried chicken come from the flavors in which the chicken is marinated, he says. For example, fried chicken with an Asian influence might contain soy, ginger and garlic in the marinade. A  Caribbean style fried chicken can be marinated in a jerk seasoning mix.

The seasonings that are added after cooking make a difference too. To prepare a Cajun style chicken, Elwell adds blackening spices after it is removed from the fryer.

“The biggest part is making sure you marinate it ahead of time, and when you fry  it,  the flavor is going to carry through,” Elwell says. For Georgia Tech's Thursday night fried chicken extravaganza, he uses hot sauce and marinates the chicken overnight. “The heat and the vinegar from the hot sauce will start to tenderize it just a touch.” Flavors are also amped up by the 11-ingredient fried chicken flour mix, which includes paprika, peppers, nutmeg and others.

One fried chicken variation that is on trend now is hot chicken, which reportedly got its start in Tennessee and is often served with a cayenne paste, pickles and white bread. Regional chains that offer hot chicken are getting much attention from consumers, and restaurateurs from independents to national operators are offering their own variations.

Following tradition
But while hot chicken has grown in popularity over the past several years, many consumers still crave a more traditional fried chicken experience, says Rob McDaniel, chef at SpringHouse in Alexander City, Ala. His favorite variation involves a multi-step process that begins with hot-smoking the chicken and then allowing it to cool. He then breaks the chicken down into breast, wing, leg and thigh portions, and soaks them in a mixture that includes buttermilk, TABASCO® Sauce, salt and black pepper. While the chicken soaks, McDaniel mixes flour, garlic powder, onion powder, salt and black pepper. He drains the chicken, tosses it in the flour mixture and fries it in peanut oil for three to four minutes. The chicken then is placed on a cookie sheet with a resting rack.

“The rack will allow the chicken to drain and not get soggy from sitting in the grease,” McDaniel says. “Season with another pinch of coarse sea salt and a few grinds of fresh black pepper.”

Blue Ribbon Fried Chicken promoted the sandwich on social media. “We dared everyone to finish the Smorgasbird in under five minutes, share their efforts on social media and tag a friend to challenge. People have a lot of fun with it, and there are some really great photos and videos out there,” Anderson says. The operator also donates to the National MS Society $5  for each Smorgasbird  sold.

Fried chicken also works well in nontraditional formats, such as tacos. Pedro’s Tacos, which opened in 1986 in Orange County, Calif., offers fried chicken as one of the options for its tacos. “In the early 1990s, even in California, many people were not yet comfortable with the idea of fish tacos,” says Ed McNary, who purchased Pedro's from its original owner in 1989. “There was often that one stickler in a family or group, not happy like the rest about eating at this 'unknown' fish taco stand.”

Pedro’s Tacos now has five locations in California and Boston. McNary, who with his wife Charlene own two locations — the others are franchised — says the fried chicken taco substitutes a seasoned, breaded chicken tender for the battered fish. It also contains shredded cabbage, white sauce and salsa, served in a soft tortilla. “It has sold well for 20 years, maybe because for a period of time it was unique to Pedro's, and people liked its uniqueness,” he says. “Now it’s become more of an option for people who eat a lot of fish tacos and need some variety.”

“Fried chicken is simple, but it has to be done well,” says Georgia Tech's Elwell. “It is comfort food for everybody.”