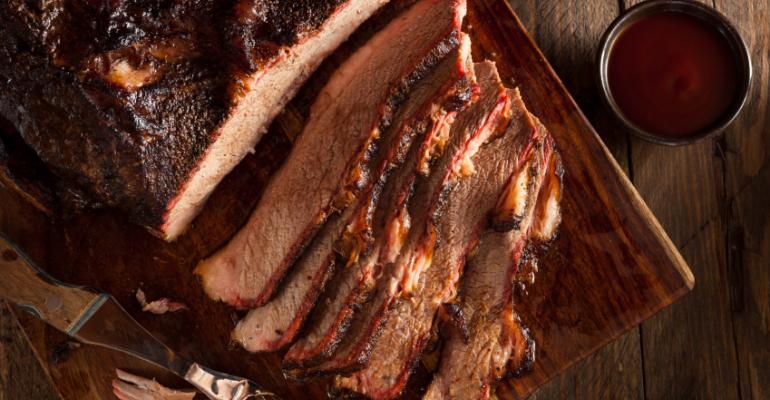 Though smoking is an ancient cooking and flavoring technique, it continues to intrigue modern chefs seeking depth and dimension in their plated creations. Traditionally, though, smoking happens outside in equipment too bulky for the kitchen. And since it takes skill and observation to do well, the risk of overdoing it arises when the smoker rests well beyond the chef’s watchful eye.

That’s led chefs to get clever about making ways to bring smokers indoors. Some, large enough to accommodate whole hogs, are found in kitchens purpose-built to accommodate them. Others are small burner top units designed to accommodate only a pair of fish filets. In between are electric smokers that take up the space of a normal oven and fit easily under a hood.

To smoke a range of menu items, Tenney Flynn, chef/owner of GW Fins in New Orleans, squeezed a residential outdoor smoker under the hood of his restaurant. In it he cold smokes shucked oysters and soy orange marinated salmon. When ordered, the oysters are buttered and served sizzling on half-shells heated to 700 F, and the salmon is broiled and garnished with a compound butter made with smoked jalapenos and charred mango.

“It’s the whole fajita effect with the oysters,” Flynn says. “The cold smoke really cuts that oily taste that some farm-raised salmon has.”

Flynn also hot-smokes swordfish backbones and collars.  To make a glaze, he brushes them with a smoked jalapeno barbecue sauce.

“Those backbones are really fatty pieces, so they smoke nicely,” he says. “I like to pair those pieces with acidic garnishes.”

All three Victory Brewing Co. brewpubs house large indoor smokers. According to Matt Krueger, vice president of retail operations at the Downington, Pa.-based Company, a carousel smoker at one facility “is as big as a Volkswagen. It’s electric and we use hickory wood sawdust to create the smoke.”

“To cold smoke, we start with a very small amount of lump charcoal in the far corner of the smoker and add a fresh piece of oak to get a nice thick smoke rolling,” Krueger says. “Then we put a firm cheddar in the opposite end of smoker and let the smoke roll about two hours until the cheese starts to perspire. Fresh mozzarella is a little trickier since it wants to melt, so we make a little boat of aluminum foil to keep it together.”

Two of Victory’s barbecue sauces, Alabama red and white, feature some spicy back notes, but its chile-pepper vinegar sauce is what brings the sting to its chopped brisket.

“I like it chopped, not sliced, because that means every bite has a little bit of bark, a little bit of fat and plenty of meat,” he says. “We hold it in its natural juice for service.”

At the Wrigley Taproom in Corbin, Ky., Chef Kristin Smith smokes whole salmon sides in a small electric smoker next to her fryer. The moist meat is then pulled apart in chunks which are served in tacos with a spicy aioli.

“We start with a bourbon brine on the salmon since it ties back to our Kentucky cooking heritage,” she says. The aioli, she adds, gets its kick from a good dose of TABASCO® Sauce. “I really like the way it brightens up the smoke flavors—brings them out.”

Adam Hegsted, chef/owner at Wandering Table in Spokane, Wash., uses an electric smoker that controls temperatures for hot and cold smoking automatically. That unit, he says, has a footprint about the size of a warming oven.

Into the smoker he places apple wood for cold smoking duck pastrami, steelhead salmon and tofu. During service he uses hot smoke to finish poached half chickens and smoke dry-brined salmon filets to order.

“It’s really nice to be able to have that kind of temperature control,” he says. “The heating element can heat the wood just enough to create smoke, but not really heat up the fish or tofu.”

His heavily hot smoked brisket, though, is one of his favorites. The bark formed in the process makes a perfect match for spicy sauces and garnishes.

“If you’ve already got something with strong flavors, like smoked foods do, spicy, zesty sauces are perfect,” he says. “We make a grain mustard sauce, and we also like to serve sauerkraut with the beef. A spicy barbecue really works with that, too.”