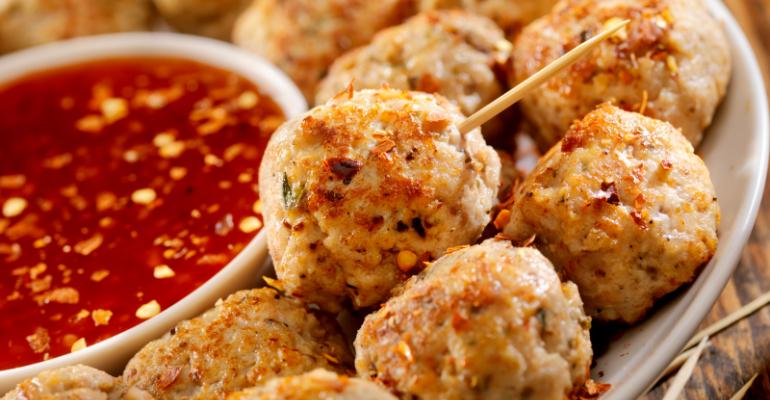 As a glance at nearly any restaurant or catering menu lately will tell you, Americans increasingly like spicier foods. Numbers support that observation as well: A 2015 NPD Group study showed that in 56 percent of U.S. households, hot sauces can be found in their pantry, and that men and women of all ages love the stuff.

“Hot sauce is clearly part of the diet of many U.S. consumers, and it’s a food that crosses gender, age, ethnicity and income,” an NPD spokesperson says.

In addition, a hot sauce such as TABASCO® Original Red Sauce is about the handiest of ingredients for adding complex flavors to dishes with just a few dashes — or several ladles as catering volume would require. Few things elevate and amplify other flavors as easily as the touch of vinegar and aged red peppers.

As spicy influences gain firmer footholds in home-cooked and restaurant meals, can the same be assumed for catering menus? Sometimes, say caterers and their chefs. Serving large numbers of people requires that their use of heat and spice be more nuanced so as to please the masses.

“I do have many clients who are particularly fond of spicy foods, but they will ask for their own special batch,” says Alejandro Muguerza, president of Le Basque, a Miami-based catering and event management firm. “When it comes to serving large volumes of people, we tend to go more neutral with spice.”

Yet Muguerza insists neutral does not imply bland or even tame flavor profiles. While a lot of spice does come from peppers, that’s just one dimension in a sauce or rub or seasoning designed to awaken guests’ taste buds. A simple sofrito using garlic, tomato, lemon and a single mashed guindilla pepper delivers complexity to mildly flavored protein dishes such as fish and chicken without adding the heat.

“Even the Espellete, a dried red pepper from which Basque paprika is made, can bring a lot of flavor if you know to use just a little bit,” he says. “I like to say that peppers used correctly give happiness to the dish. They don’t burn the guest.”

Guillermo Pernot says some clients request bottled hot sauces or a custom sauce option be offered alongside salt and pepper on buffet lines or group tables. But in foods left to his governance in the kitchen, he seeks to deliver pepper flavors that add negligible heat to his dishes.

“I prefer to use chiles, to roast them, serve them raw or sauté them,” says Pernot, corporate chef and concept chef for Cuba Libre Restaurant & Rum Bar in Philadelphia. “This way they perfume a dish and add just enough heat that you notice it, but it dissipates quickly.”

If customers request a mix of sting and savory, Pernot turns to a variety of radishes and spicy greens for unique results.

“I like to garnish dishes with breakfast radishes or daikon or even mustard greens to introduce spice to the dish,” he says. “Those also add texture and crunch to a dish.”

Andrew Ashmore, director of culinary at Chicago-based Roti Modern Mediterranean, describes the addition of spice to his lamb meatballs as “introducing flavors to customers without hitting them in the mouth.” He says the 20-unit chain’s signature meatballs get their pizzazz not only from red chili flakes and a bottled hot sauce, but from mint and oregano, too.

“We'll have catering customers who say it's a little too spicy, but I tell them we want them to be spicy because they’re unique,” Ashmore says. “If they want to cool it down, they can use our cucumber dill sauce for that.”

When it comes to an all-purpose liquid lashing of spice, Ashmore’s go-to is a s'hug sauce (also spelled zhug). To prepare the green version of this Middle Eastern staple, he combines cilantro, parsley, garlic, basil, scallion, toasted cumin, coriander and jalapeños.

“It’s like pesto in that it’s bright green in color, really aromatic and spicy,” he says. “The red version uses red chiles, cumin, cinnamon and lots of coriander.”

Coté Catering chef, Sonya Coté, uses long-fermented pepper sauces to bring the heat to her buffet meals. Based in Austin, Texas, Coté has access to an abundance of Scotch bonnet, paper lantern, Thai and habanero chiles that she smokes over wood until dry. She then grinds and ferments them 14 days in a sugar and vinegar mash.

“I like to have a couple of bottles of chile sauce at the buffet table when I’m catering,” she says. “We’re in Texas, so there are not too many wimps here when it comes to spice. So I don’t ever want to under-spice something. Guests can always add more if they want.”