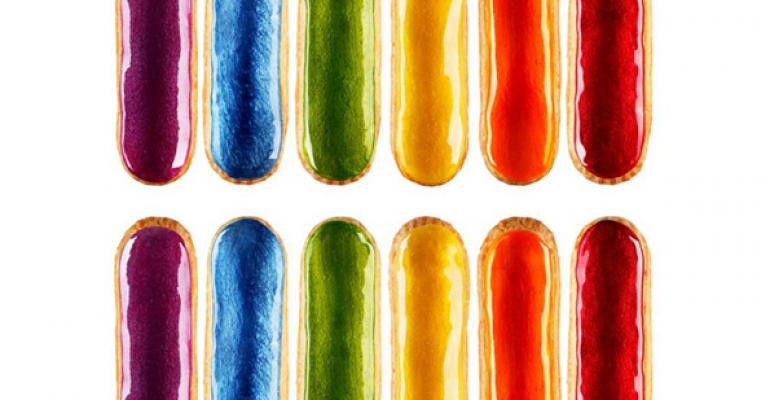 All summer long, New Yorkers willingly stood in line for hours to buy Cronuts, the croissant-donut hybrid that sold for $5 apiece at the Soho shop of pastry chef extraordinaire Dominique Ansel. Now another pricey pastry product—éclairs, gussied up to reflect contemporary tastes and trends—is taking off in France. If they catch on in the U.S., even restaurants that don’t employ pastry chefs will be able to cash in this time.

Cronut-mania has begun to dwindle in New York City, where lines to purchase them from Ansel’s shop have become much shorter. Nationally, this trend never really caught on, although a few imitators gave it a shot. The latest attempts include a “Demon’s Delight” Cronut burger and “Wake ’n’ Bacon” fried egg sandwich from Devil Dawgs in Chicago. Both sandwiches are built on a Cronut base. True aficionados will be able to buy a Cronut Hole Concrete frozen custard treat at Danny Meyer’s original Shake Shack in Madison Square Park in Manhattan on Sept. 17 for a one-day-only charity promotion.

Ansel himself is moving on, now pushing Magic Soufflés, a brioche filled with chocolate soufflé. It’s a tricky-to-produce item that, while probably not destined to reach Cronut-level popularity, sure sounds like a winner to us.

The success of the Cronut has given restaurant operators four things to think about:

1. It’s possible to breathe new life into standard French pastry items like a croissant and brioche.

2. No one cares how many calories these sinfully rich spinoffs contain.

3. The market for these new concoctions is vast, even among non-foodies.

In Paris, pastry chef Christophe Adam is pulling off something similar. His idea is to put a contemporary spin on the classic éclair and sell them for five Euros apiece, roughly $6.75. His flavors—80 varieties in all so far—range far beyond the typical vanilla pastry cream filling/chocolate-topped exterior combination. Yuzu, truffle, salted caramel, popcorn—Adam presents customers with an imaginative palette of flavors from which to choose.

Unlike Ansel and his Cronut creation, Adam pays plenty of attention to the exterior of his éclair product.

“I always loved working on the look and the design of a pastry,” Adam told Slate. “An éclair has to taste good of course, but it’s also very, very important for it to look beautiful, to have that high-end, contemporary, modern quality. Five Euros isn’t cheap for an éclair, but they’re made fresh, with sought-after quality ingredients, in an environment where we pay a lot of attention to aesthetics, and all of that has a cost.”

Adam has two L’Eclair de Génie stores in Paris that feature his product. He says he wants to do something similar in New York. U.S. restaurant operators may wish to start coming up with éclair variations of their own before he does.

Keep in mind that while you need high-end pastry skills and equipment to produce a Cronut equivalent, éclairs aren’t nearly as demanding. If your kitchen has a mixer to whip up a simple pate a choux and someone who can load the resulting dough into a pastry bag and pipe it onto a sheet pan, you can produce éclair shells in volume. From there, it’s a matter of coming up with interesting flavor variations and cool looks for your finished product.

We don’t know that over-the-top éclairs will take off in the U.S. But think back to the heyday of the last national baked good trend in the U.S.—gourmet cupcakes—and then take a look at what Adam’s putting out at his shop. Hard to believe that, in the right hands, these products couldn’t be moneymakers for some operations.