/sites/all/themes/penton_subtheme_restaurant_hospitality/images/logos/footer.png
Recent
Recent
Here are some of the biggest restaurant recipients of Paycheck Protection Program loans
Jul 07, 2020
José Andrés’ ThinkFoodGroup puts safety first as it reopens restaurants
Jul 06, 2020
Will the Uber Eats-Postmates delivery merger lead to lower commission fees for restaurants?
Jul 06, 2020
Uber Technologies to buy Postmates for $2.65 billion
Jul 06, 2020
How restaurants should prepare for a second wave of COVID-19, according to a disaster planning expert
Jul 02, 2020
Featured
Texas and Florida shut down on-premise service at bars as coronavirus case counts soar
Jun 26, 2020
How restaurants can embrace diversity and inclusion in the wake of the Black Lives Matter resurgence
Jun 18, 2020
Carl Howard, CEO of Fazoli’s, discusses how the chain has thrived during the coronavirus pandemic
Jun 11, 2020
Restaurants Rise: Heads of Wow Bao and Taziki’s Mediterranean Café plot strategies for growth
Jun 05, 2020
Flavor of the Week
brought to you by
Food & Drink>Food Trends 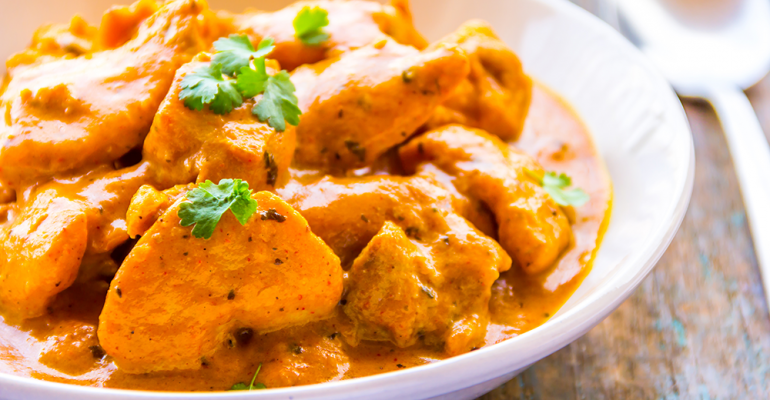 Butter chicken is a quintessential dish found in Indian restaurants in the United States and other Western countries.

This Flavor of the Week is a hearty, comforting, creamy, savory dish that offers consumers a filling and fulfilling option. In its most basic preparation, butter chicken is comprised of spiced yogurt, chicken and a sauce made with butter, cream, onions, ginger, tomatoes and warming spices such as cumin, turmeric and cinnamon.

Marketing research firm Datassential reports that 60% of American consumers know about butter chicken and less than 40% of them have actually tried it. It has risen by nearly 40% on menus at U.S. restaurants in the last four years. Still considered a unique flavor in the States, butter chicken is popular among patrons of progressive fast-casual restaurants and casual-dining independents.

Find out more about this edition of Flavor of the Week by clicking through the slideshow which also includes menu ideas.