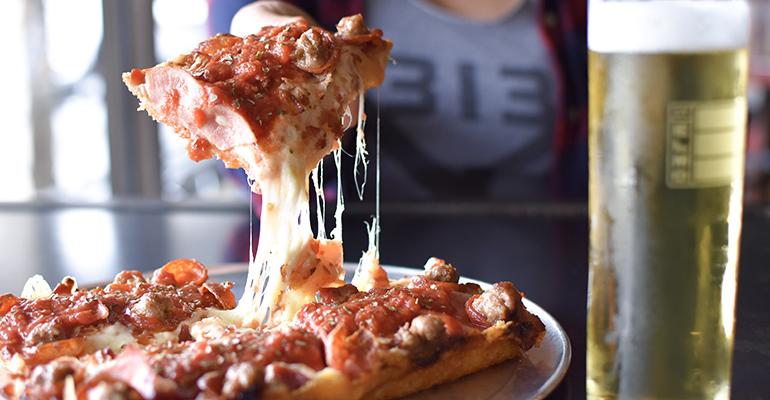 Customers across the country are digging the “red top”

Across the country, Detroit-style pizza is gaining popularity, even in markets like New York and Chicago that often shun an outsider’s pie.

The popularity of the “red top,” a nickname for the pies that are finished with sauce, is coinciding with the revival of the Motor City itself. Whatever the reason, the square — actually rectangular — pan-baked pies with caramelized cheese on the crust, which borrow from Sicilian and Chicago-style pizzas, are gaining fans as restaurants around the country put their own spin on the recipe.

When it comes to Detroit-style pizza, many point to Buddy’s, a classic 72-year-old institution in Detroit, as the source of their inspiration. Buddy’s, also, is capitalizing on the sudden demand for Detroit-style pies.

In January, CapitalSpring, a restaurant-focused private-investment firm, announced that it had invested “significant capital” into the chain to accelerate new store growth.

“This partnership is a significant opportunity for us to introduce Buddy’s iconic pizza, rich culture and community roots to new customers in Detroit and beyond,” said Robert Jacobs, CEO of Buddy’s, in a statement.

But Buddy’s will find that many of the operators it influenced might be now competitors.

Generally Detroit pizza concepts are full service, but the style is becoming increasingly popular in food halls, like Federal Galley in Pittsburgh, run by Galley Group.

“We try to pick concepts that fill a gap in whichever market we are in, and Pittsburgh definitely doesn’t have many Detroit-style pizza concepts,” said Galley Group co-founder Ben Mantica. Michigan & Trumbull, a restaurant serving Detroit-style pies for $10 to $17, resides in his company’s new food hall. Karen Rampey isn’t from Detroit, but she was inspired by Buddy’s on a trip. She started her brand, Pi-Squared, in 2016 and now runs two locations. The brand also has one franchised unit. All three are in North and South Carolina.

To develop her pies, Rampey experimented with different doughs and cheese. She decided on Grande’s mozzarella. The cheese is an important part of a Detroit pie, she explained, because “you purposely push the cheese to the edge of the pan, so they actually caramelize.”

The interior of Pi-Squared locations are decorated with Detroit memorabilia, and said Rampey, “We hope we’re part of the process of giving Detroit a good name.”

Although Rampey serves traditional wood-fire pizza too, a majority of the customers go for the Detroit-style pies, which range from $9 to $16. But she admits she does have to explain to customers what makes Detroit-style different.

Even closer to the pie’s origins, customers are sometimes confused, said Simon Joseph, the managing partner and executive chef at Just in Time Hospitality out of Traverse City, Mich. Joseph opened Alley’s Market, a neighborhood convenience store and Detroit-style pizza shop in June 2017. “We do have to explain the pizza on occasion,” Joseph said. “We have studied the history of D-style, and if someone wants to know more, our staff can give them the works.”

Alley’s Market’s pies range from $12 to $19, with most of his business done in carry out. Joseph is adding delivery next month.

In New York, hand-tossed, thin-crust pizza is king, but Matt Hyland wasn’t afraid to bring a different pie to the people.

“I am from New York and I love all pizzas — both round and square!” he said.

Pizza Loves Emily restaurant group, which Hyland owns with his wife, Emily, started with the more familiar Neapolitan-style pizza at Emily Brooklyn, which opened in 2014.  Two years later they brought Detroit-style to the Big Apple with Emmy Squared, also in Brooklyn. They then opened Emily West Village, a hybrid of the two restaurants.

The group has recently opened an Emmy Squared location in Nashville, with another set to open in Manhattan soon. Pies, including some funky flavors like the Hula Hog, a white pie with mozzarella, bacon, pineapple and pickled jalapeños, range from $16 to $22. A meal at Emmy Squared Brooklyn

For the owners of Michigan & Trumbull in Pittsburgh’s Federal Galley food hall, it was Emmy Squared that convinced them that Detroit-style pies could have broad appeal.

“It was an eye-opener to see a restaurant serving Detroit-style pizza in NYC and to be that successful,” said co-owner Kristen Calverley. “The reaction has been overwhelming. You have the occasional guest who believes their pizza is burnt because of the caramelized cheese crust, but in general, the feedback has been super positive and really encouraging for us.”

With five units, Austin-based Via 313 is one of the more established restaurants introducing customers to Detroit-style pizza.

The brand got its start by serving pies out of a trailer in 2009. Today the average check at the trailers, which have a limited menu, is $17. At their restaurants, it’s $37.

“We realized early on that we were taking a risk bringing this type of pizza to Austin, and then calling it Detroit style was another risk,” said Zane Hunt, a Detroit native who founded Via 313 with his brother Brandon. “Brandon and I stood outside of our first trailer location many nights handing out samples to folks walking by.  We made the decision to call it Detroit style in order to generate curiosity and give our home city the due it had long deserved.”

When Hunt brought Detroit-style pies to Austin, he saw a “vacancy in the marketplace for not only square pizza but really any kind of pizza other than New York style.”

Bringing Detroit-style pizza to Chicago was a different story. Union Restaurant Group chef and partner Vince DiBattista started by offering regulars a taste of Detroit-style pizza at his restaurant, Union Pizzeria, located just outside of Chicago in Evanston. Although the restaurant serves Italian small plates and wood-fired Neapolitan pies, customers were familiar with a deep dish, this being Chicago after all.

“What I found was that a lot of people are reluctant because they have their idea of deep dish pizza,” he said. “They don’t expect until they taste it that it’s going to be so different. That’s the reaction that I like seeing. I like watching people experiencing it and enjoying it for the first time. It can be light and fluffy and crispy.”

After positive reviews, DiBattista opened Union Squared in Revival Food Hall in Chicago, which serves Detroit-style pies and slices, a rarity for this style of pizza, and shortly after opened a Union Squared location in Evanston.

At the food hall, many customers buy the giant slice — really half a pie — for $10, while at the Evanston location, carryout is the focus with pies sold for about $25 each.

Detroit-style pizza has “a momentum behind it,” said DiBattista, citing the pizza’s popularity on Instagram.

Hunt from Via 313 sees humor in his hometown pizza’s newfound celebrity.

“It’s ironic that it is indeed a trend when there is really nothing trendy about it,” he said. “This pizza has been made for over 70 years in the Detroit area. But we live in a sort of peak food culture or climate. Things ranging from basic to fancy in the culinary world get hot and trendy all of the time.  Whether it stays being viewed as trendy or not, I do think that Detroit-style pizza is here to stay and will continue to grow nationwide because pizza doesn’t ever really go out of style.”