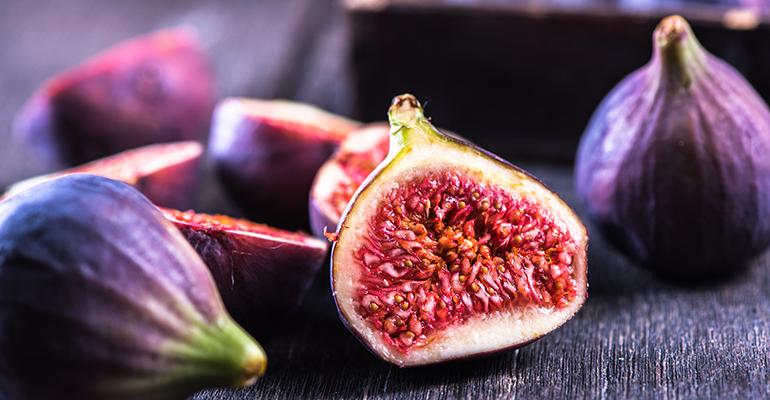 Chefs give a fig for the fragrant fruit

It’s the time of year when visions of sugar plums dance in our heads. Most consumers, however, don’t know that sugar plums aren’t actually plums at all, but small candies made from dried fruit like apricots or figs. They’re also in the dark regarding that other holiday treat celebrated in song and verse: figgy pudding. Figgy pudding is an old-time Christmas pudding from the U.K., which is to say a dense, brown, sort-of confection that’s an acquired taste and first cousin to our own dense, brown, sort-of fruit cakes that turn up like clockwork during the Christmas season.

All of which is a good excuse to consider the fig, which has had quite a run on American menus of late. Market-research firm Packaged Facts’ Food Forecast 2018 identified figs as one of 10 trends to watch in the next year on the basis of their connection with trendy Mediterranean and Middle Eastern cuisines, their growing appearance on menus of all types, and their versatility in both sweet and savory applications.

They make a fine first course. The summer menu at Seasons 52 featured a starter of Roasted Prosciutto-Wrapped Figs that consisted of black Mission figs stuffed with gorgonzola and wrapped in prosciutto. Satterfield’s in Birmingham put summertime on a plate with a Peach and Fig Salad that combined local figs and peaches with arugula, Parmesan, Benton’s country ham and honey-cider vinaigrette. In Los Angeles, The Bellwether takes a totally different tack with its Italian-accented Fava e Cicoria made with dried fava-bean purée, Mission figs, Parmigiano-Reggiano and olive oil over a bed of frisée, topped with crunchy croutons.

They’re a natural addition to pizzas, as at aMano in Mattituck, N.Y., where figs, prosciutto, fontina, arugula, pecorino and balsamic top a tasty house pie. The Fig Nasty Pizza, a special at The Obstinate Daughter, near Charleston, S.C., is made with figs, gorgonzola, speck, red onion, mozzarella and vin cotto. In a variation on this theme, Seattle’s Goldfinch Tavern offers Fresh Fig Bruschetta with sliced figs, herbed goat cheese, sage and smoked Gouda.

They also brighten up sandwiches, like the Fresno Fig Burger, a menu staple at California-based Eureka Restaurants, which sports fig marmalade, along with melted goat cheese and spicy porter mustard. One Flew South, located in Atlanta’s airport, soothes weary travelers with the Pulled Duck Sandwich with duck confit, a nifty fig and toasted peanut relish, scallions and slaw.

And they provide a sweet ending. The clever Balsamic Fig Mascarpone Ice Cream from uber-trendy Coolhaus is a frozen take on the classic meal-ending cheese course, and the Fig Financier, sponge cake with raspberries and ginger syrup, provides an elegant ending to meals at Jean-Georges in New York City. Fig & Olive, which operates eight units and bills itself as a casual-chic Mediterranean concept, offers a breakfast item that sounds good enough for a dessert menu: French toast plated with fig-cinnamon jam, seasonal fruits and vanilla whipped cream.

But wait, there’s more. A while ago, the Washington Post reported that figs were popping up at bars around D.C. in beverages like the Fig Old Fashioned made with muddled figs and balsamic vinegar at Bar Dupont, and the Figure 8, Scotch ale made with local figs and aged in bourbon barrels at Bluejacket Brewery. The story also noted a limited-edition Chipotle, Bourbon & Fig BBQ Sauce on offer at Smoke & Barrel.

Although figs have made significant headway on menus, stay tuned for even greater advances in the future. About 90 percent of figs consumed in the U.S. are grown in California, and producers there have made it their objective to grow and harvest the fruit on a year-round basis, making it, they hope, as ubiquitous as apples and grapes.