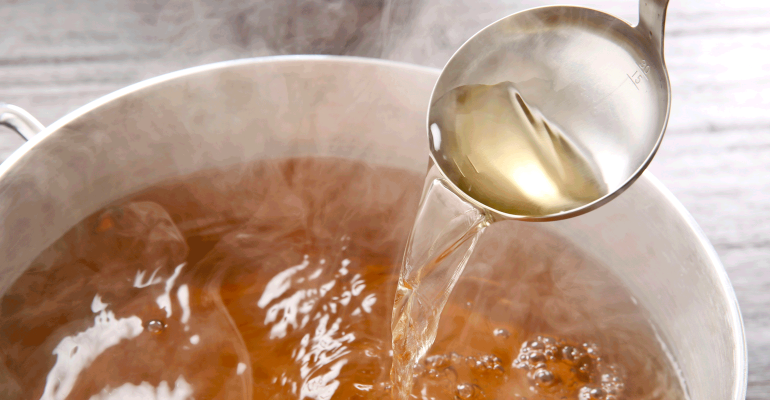 The homely soup base has become a hip menu item

No bones about it, broth is hot. Three years ago, the New York Times ran a story about bone broth that unleashed a continuing flood of articles and media reports testifying to the breakout status of the humble liquid.

The focus of the Times piece was on Brodo Broth Co., a storefront-window operation in New York City that dispenses homemade broths in paper cups for gulping on the go. Brodo, which is Italian for broth, is the brainchild of chef Marco Canora, who maintains that the trendy tonic is both comforting and nutritious and that it helped him to reclaim the vigor he’s lost to years of drinking, smoking and over-indulging, otherwise known as being a chef.

Canora’s menu model will sound familiar: Patrons choose one of four broths and then customize their quaff with dizzying array of add-ins. These include “Quality Fats” like grass-fed butter or organic coconut milk with bone marrow, “Fresh Herbs + Dry Seaweeds” like wild Atlantic kombu, and “Elixirs” like Calabrian chile oil with shiitake tea. A savvy shopper can ingest virtually every trendy ingredient of the moment in a single sip. While Canora, who has opened a second location, fearlessly predicted that his broth would give Starbucks a run for their money, the coffee giant so far appears unscathed by the skirmish.

However, as a result of the early media attention, what the Times dubbed “broth-ers” began popping up all over the place. Uber-hot independents like Roister in Chicago and butchery-cum-restaurant White Gold in New York City placed it on their bills of fare. At the former, a beef broth entrée made with beef cheek and tongue topped with soft-cooked egg and noodles appeared on the dinner menu last fall, while at the latter, it leads the list of lunch options.

All this action in the kitchen inevitably attracted attention from the bar. Urban lore has it that the Bullshot cocktail, which combined bouillon with vodka and a dash of hot sauce, originated in Detroit at the Caucus Club, a hangout for local pols — hence the cheeky moniker. The original location, which closed a few years ago, was redesigned and revived last July. It smartly promotes a redesigned and revived version of the Bullshot, which now boasts housemade beef stock and Italian gin served warm in winter and over ice in summer.

Chain chefs have been busily taking stock of the trend, too. Soup-and-salad specialists Souplantation and Sweet Tomatoes promote the popular Asian Ginger Broth each January, and customer demand has led the chains to post the recipe on their websites. Panera Bread’s “Eat Well, Your Way” menu offers several plant-based broths like Lentil Quinoa Broth Bowl with cage-free eggs. Belcampo, a six-unit butcher shop and restaurant combo, invites patrons to “drink your meat.” What’s more, their broth can be boosted with additions like black garlic tea and nam pla, or fish sauce. And last November, Eric Ersher, founder of the Zoup! Chain based in Ann Arbor, Mich., moved outside the box by making his small-batch, super-premium chicken broth available at retail.

As an aside, the Pomodorino Soup at Romano’s Macaroni Grill is made with vegetable broth, while competitor Il Fornaio creates its Minestrone di Verdure with vegetable stock. The distinction between these two bases, broth and stock, has sparked a minor culinary contretemps. Most experts assert that broth is made primarily from meat and that stock is made primarily with bones, which renders the term “bone broth” inaccurate. No matter the conventional classification, contemporary marketers are using the terms interchangeably, and consumers have been lapping the stuff up.

Driving the broth business over the past couple of years has been the confluence of the paleo diet craze, the larger embrace of protein-rich foods, consumer interest in authentic foods without artificial additives and ethnic traditions that promote the healing power of good soup. While these factors aren’t flagging, there may be signs that the item is set to jump the shark.

At the recent Goop Summer Conference in Los Angeles, which was led by actress, blogger and self-styled lifestyle guru Gwyneth Paltrow, attendees could fortify themselves for their crystal therapy and other “ontological experiences” with beverages like Bulletproof Coffee Plus with Brain Octane Oil, Moon Juice Blue Tonic with Brain Dust and Belcampo’s Organic Bone Broth. Perhaps because of its lack of cognitive benefits, the latter took a body blow to its coolness rating from a USA Today reporter covering the event, who sniped that it tasted like hospital food, thereby proving her ignorance of the remarkably good work being done in the healthcare service.

Regardless of where bone broth ranks on the shark-o-meter, all kinds of new-age pick-me-ups, often dubbed tonics and elixirs, are filling the pipeline to lure hipster imbibers. As scratch-made, vaguely medicinal brews proliferate, keep an eye on golden milk, which hits the trifecta of health, taste and trendiness. A combination of turmeric, milk, ginger and other spices, it’s being fashioned into lattes at leading-edge coffee shops, while at similarly edgy bars, it’s emerging in more spirited libations, minus the milk, but plus tequila, rum or bourbon.