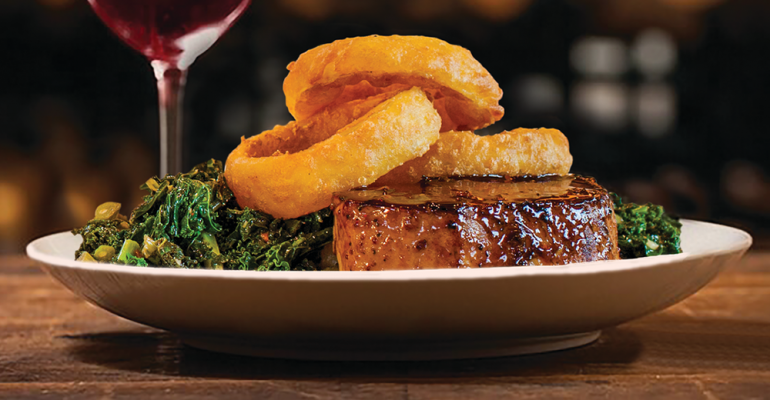 From bacon to belly

You’d have to work mighty hard to find a diner who isn’t crazy about bacon.

According to the research meisters at Datassential, bacon scores as the number-one most popular meat with consumers, a fact that doubtless contributed to making pork the fastest-growing protein in the foodservice industry between 2011 and 2017. However, while bacon represents a hefty 20 percent of the market, the National Pork Board attributes most of that increased usage to a combination of two factors: Smarter cooking techniques and higher quality cuts, of which the Heritage Pork T-Bone made with endive, burnt mustard and apricot at Here’s Looking at You in Los Angeles is an exemplar.

Belly Boom. This certainly doesn’t mean that operators are turning their backs on bellies. Far from it.

Pork belly of the uncured variety took menus by storm and has remained a culinary darling for over a decade based on the fortuitous marriage of product versatility and chef inspiration.

Some operators promote variations on the theme, as at venerable Commander’s Palace in New Orleans, where the Smokehouse Braised Hog Jowl Bacon with creamy polenta and Southern Comfort-Alabama peach jus provides a cheeky porcine play on the standard.

Then there is Grace & Grit near Charleston, S.C., where the Farm Salad comes with pork belly lardons in place of conventional bacon bits atop the vegetables, sunny-side egg and peach sweet tea reduction.

Bacon wise, chain restaurant patrons just can’t have too much of a good thing.

Million Dollar Bacon at First Watch brings the sweet heat with four slices of hardwood-smoked bacon topped with brown sugar, black pepper, cayenne and a maple-syrup drizzle. And there is even more over-the-topness at Logan’s Roadhouse, where Bacon on a Stick comprises half a pound of 12-hour-smoked bacon seasoned with brown sugar and spices, then grilled and served with crispy onions.

Heads or Tails? Both have gotten play on menus, with the former enjoying a bit of a boomlet as chefs go hog wild with whole pig heads.

At protein-centric Cockscomb in San Francisco, diners can share Wood Oven-Roasted Pig’s Head with Vietnamese herbs, long beans, Napa cabbage and fish-sauce glaze. By contrast, Roasted Pig Head at The Greenhouse Tavern in Cleveland, Ohio, is served with barbeque sauce, raw vegetable salad and a brioche bun; with the addition of fried eggs, the item makes the brunch menu as Face and Eggs.

Maialino in New York City lives up to its name, which translates from Italian as little pig, with an appetizer of Testerella, crispy suckling pig face accompanied simply with greens and lemon.

There’s been much less culinary action around the other end of the animal, though The Purple Pig in Chicago boasts a plethora of porky pleasures including Pig Tail-Stuffed Piquillo Peppers with popcorn and chicharrons alongside Pork Neck Bone Gravy with ricotta and San Marzano tomatoes and Smoked Pork Tongue with tonnato sauce and salad Olivier.

Chop Shops. Gone are the days when overzealous cooks, especially those in their home kitchens, incinerated pork chops until they were nearly indistinguishable from bacon. Thanks to education efforts from pork producers and culinary ministrations from chefs, chops are juicy, tender and subject to a dazzling range of flavor techniques and treatments.

At Spoon and Stable in Minneapolis, Tamarind-Glazed Pork Chop is served with spicy carrot-cucumber pickle, while at Table & Main in suburban Atlanta, the chop is smoked and brined, then plated with charred shishitos, sweet corn, peaches and ham jus. 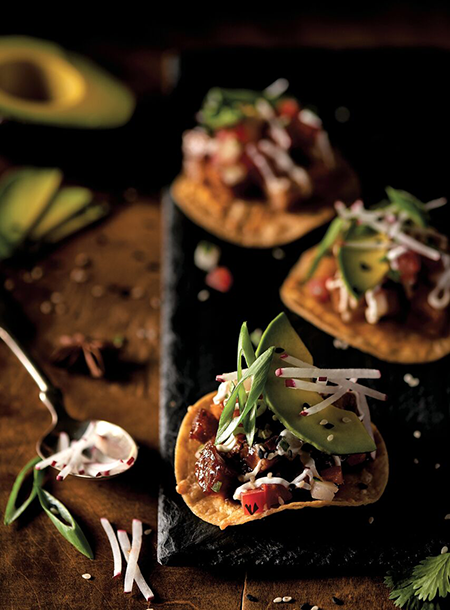 Chains choose chops, too, like Cooper’s Hawk Winery & Restaurants, which combines handcrafted wines with a modern casual-dining menu that changes its chops with the season. The Mushroom-Crusted Pork Chop available in spring has been supplanted by an autumnal Maple, Mustard & Pretzel-Crusted Boneless Chop.

Super Sandos. For many chefs, the traditional ham sandwich is merely the jumping-off point for contemporary fare with flair.

MoPho in New Orleans combines Vietnamese and Creole influences in specialties like Sloppy Pulled Pork Po-Boys with crispy crackling and pickled vegetables. At Closed for Business, a popular gastropub in Charleston, S.C., the signature Pork Slap tops a crispy pork cutlet with barbecue ham, provolone cheese and green tomato. But special props go to Cockscomb, which takes the notion of a “Ham” Burger literally by starting with Ground pork shoulder and finishing with gruyère, Dijon mustard and grilled onions.

Nancy Kruse, president of the Kruse Company, is a menu-trends analyst based in Atlanta. As one of Linked In’s Top 100 Influencers in the U.S., she blogs regularly on food-related subjects on the Linked In website.